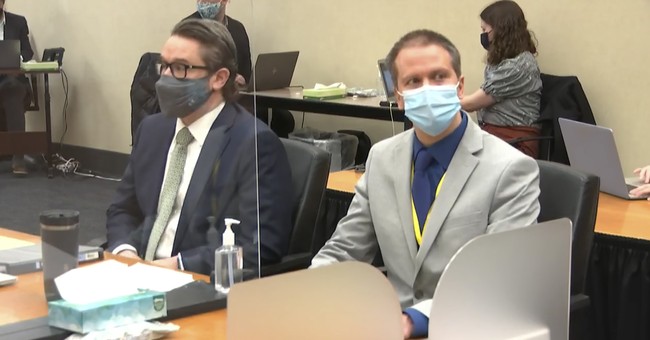 UPDATE: Former Minneapolis Police Officer Derek Chauvin has been found guilty on all charges of second-degree unintentional murder, third-degree murder and second-degree manslaughter in the death of George Floyd. The judge asked all jurors if the verdict was their true determination, they said yes. Chauvin was led away in handcuffs by the4 Hennepin County Sheriff's Department.

Chauvin will be sentenced at a later date.

The jury in the trial of former Minneapolis Police Officer Derek Chauvin trial has reached a verdict. It will be read Tuesday afternoon from the Hennepin County Courthouse between 4:30 and 5:00 pm ET. According to reports, there were no questions from the jury.

Prosecutors and the defense finished closing arguments on Monday afternoon. Jurors stayed late after closing arguments, ending at 8 p.m. and started the day early at 8 a.m. The trial lasted 14-days. Jurors were instructed not to "turn on the news," but were not sequestered.

Chauvin faces one charge of second-degree unintentional murder, third-degree murder and second-degree manslaughter after George Floyd died while he was subduing him on the ground on May. If convicted, he faces up to 40 years in prison.

Chauvin's attorneys asked for a mistrial after Democrat Congresswoman Maxine Waters urged violent rioters to get "more confrontational" should the jury reach a verdict other than "guilty." While the judge denied the request, he did say her remarks could grant them a solid argument on appeal and make the entire first trial "being overturned."

“I’ll give you that Congresswoman Waters may have given you something on appeal that may result in this whole trial being overturned," he said.

“I’ll give you that Congresswoman Waters may have given you something on appeal that may result in this whole trial being overturned.” pic.twitter.com/jPp7zl0iGd