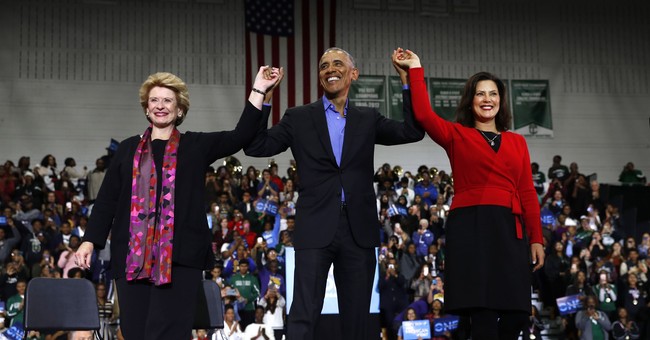 Michigan Governor Gretchen Whitmer’s (D) campaign is currently running political ads on Facebook, to the tune of over $10,000, during COVID-19. Her governing choices, which many argue overreach her authority, unleashed backlash from her constituents who are out of work due to her executive order. While Gov. Whitmer pledged to do the job that Michiganders elected her to do, the Democratic rising star eyes a vice presidential bid, alongside presumed Democratic nominee Joe Biden.

As NYT reported, via an unnamed advisor to Gov. Whitmer, the Michigan Democrat would gladly accept a vice presidential tap from Biden. Gov. Whitmer herself dodges the topic of a potential Biden-Whitmer ticket, claiming that she is focused on governing the state of Michigan.

Democrat Gretchen Whitmer is turning Michigan into a police state.

Her latest defense for her draconian measures?

From delayed-aid requests to VP auditioning, her handling of this crisis has been a complete disaster. pic.twitter.com/yK8kEuUWxx

Such an ad buy, in the middle of a global health pandemic, makes Gov. Whitmer’s ambitions clear. While she eyes a vice presidential bid, Michiganders are left without a post-COVID-19 plan. With no tangible timeline or strategy, Gov. Whitmer indicated that things may not be normal anytime soon, but has released no plan thus far, as GOP research group Michigan Rising Action points out:

“We can’t resume normal life until we have a vaccine.”

.@GovWhitmer has no plan for:
+ Contact tracing of new COVID-19 cases
+ Depression level unemployment
+ The failing unemployment insurance system that has left thousands unable to apply for or receive payments
+ School to return in the fall #migov #mileghttps://t.co/ZFcVcqQOkk

Michigan’s unemployment system is still experiencing logistical issues, leaving those out of work due to COVID-19 unable to receive benefits as the state's unemployment numbers climb:

"Michigan is experiencing depression level unemployment and sadly thousands of Michiganders have yet to receive unemployment payments from the state," said Tori Sachs, executive director of Michigan Rising Action. "Gov. Whitmer’s focus on politics in her bid to be named Biden’s running mate comes at the expense of finding solutions for the ongoing unemployment, economic, and health problems in Michigan."

While Gov. Whitmer makes her case to Joe Biden, Michiganders suffer the consequences of her political ambitions.