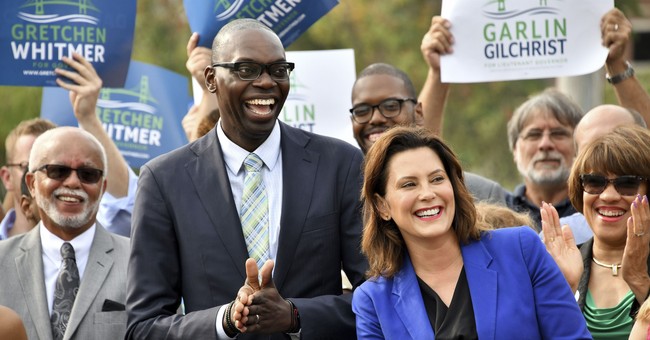 Michigan Governor Gretchen Whitmer (D) is under fire again, after a controversy surrounding contracts for consultants hired to run data for the state of Michigan during COVID-19. Gov. Whitmer announced on Monday that a $200,000 no-bid contract would be signed and would allow subcontractors to be hired to help track data surrounding COVID-19, mainly those who have contracted the virus and who they may have interacted with. After Gov. Whitmer announced the contract, Michigan’s Department of Health and Human Services revealed that the data collection program would be spearheaded and overseen by Great Lakes Community Engagement, which specializes in data and is run by a high-profile Democratic operative in Michigan. The program was set to be co-managed by EveryAction, an operation that is closely allied with NGP VAN, which is essentially the technology bolster for the Democratic Party.

Gretchen Whitmer hired 2 firms to do COVID-19 contract tracing for her state.

The head of the 1st runs the voter database for nearly every Dem campaign, including hers.

The head of the 2nd said he hopes @realDonaldTrump "gets Coronavirus ASAP."

Gretchen Whitmer’s silence on this is deafening. She either knowingly awarded contracts that would benefit Dem organizations, or she mismanaged taxpayer money during a crisis. Which is it? https://t.co/nmaqNPkLw2

And the fact that they were @GovWhitmer data firm during her election. pic.twitter.com/vVeM8U7AzA

Even after the walk back, Gov. Whitmer and her administration insist that the hiring of such a high-profile Democratic firm was not a political move, nor would any data be used to further a political agenda. Justified skepticism of Gov. Whitmer’s remains, especially as she prepares to potentially accept a vice presidential bid from presumed Democratic presidential nominee Joe Biden.

This New Peer-Reviewed Article Could Be a Game-Changer
Townhall
People living normal lives now have some thoughts for Pfizer's CEO and his prediction on when we'll get to live normal lives again
Twitchy
WATCH: Media Finally Nails Biden Admin on False CBP Story, Asks Why They Don't Have Wall
Redstate
FBI Narrative About the Jan. 6th Capitol 'Insurrection' Is IMPLODING
PJ Media