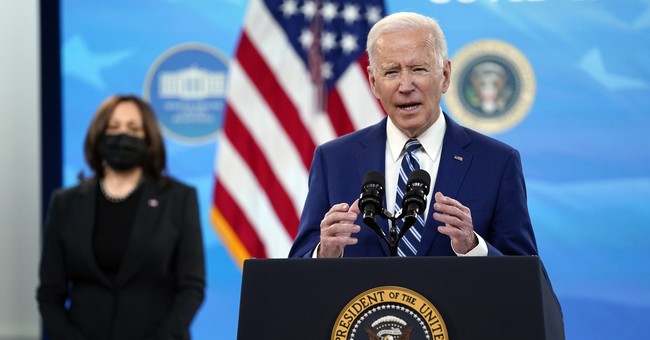 Katie has covered this for a while, but today is the day it’s all official. President Joe Biden’s slew of executive actions on gun control is now etched in stone. These are going to happen. It was a 2020 campaign promise. Rumblings that things were on the move were heard in February. And yesterday, we found out they were imminent:

"I don't have anything to preview, but I can convey the President will have more to say tomorrow," Psaki said.

Psaki's confirmation comes after POLITICO first reported the news and what Biden is expected to include in the orders.

"Biden will direct the administration to begin the process of requiring buyers of so-called ghost guns — homemade or makeshift firearms that lack serial numbers — to undergo background checks, according to three people who have spoken to the White House about the plans. He is expected to be joined at the event by Attorney General Merrick Garland," POLITICO reported Wednesday.

Last night, a preview was released:

The Justice Department, within 30 days, will issue a proposed rule to help stop the proliferation of “ghost guns.”

The Justice Department, within 60 days, will issue a proposed rule to make clear when a device marketed as a stabilizing brace effectively turns a pistol into a short-barreled rifle subject to the requirements of the National Firearms Act.

The Justice Department, within 60 days, will publish model “red flag” legislation for states.

The Administration is investing in evidence-based community violence interventions.

The Justice Department will issue an annual report on firearms trafficking.

The President will nominate David Chipman to serve as Director of the Bureau of Alcohol, Tobacco, and Firearms.

This afternoon, Biden reiterated the same old talking points about gun violence and how it is an epidemic and an embarrassment. It's not an epidemic, but this is the Democratic Party, peddling false narratives that are further aided by their allies in the media is their bread and butter. Another item not included in the preview last night was banning certain kits related to the building of firearms. The Washington Post reporting this so it'll probably get another clarification later in the day:

In the White House Rose Garden, the president is expected to announce new rules on firearms that are assembled at home, which lack serial numbers and are harder to track, among other moves designed to make it harder for unqualified people to obtain dangerous weapons.

...the issue of gun violence moved vividly the forefront after the two mass shootings, one in the Atlanta area in which eight people were killed and another in Colorado, where 10 were killed.

Biden’s aides stressed that beyond mass shootings, the president wants to focus on curbing the more frequent and deadlier epidemic of day-to-day gun violence that disproportionately affects Blacks and Latinos.

Yeah, funny how that Boulder shooting just vanished from newsrooms once it was reported that the suspect is a Syrian refugee and not a white dude, but that's another story. Look, it seems as if Biden also wants to target gang violence, which is fine. We're talking about illegal firearms here. We can all get on board with that, but once again Democrats will certainly try to pass measures that only curb the rights of law-abiding Americans.

These measures are the foundations for what the Left really wants to do: shred the Second Amendment.

The ATF Director nomination is incredibly troubling, but overall—these initial orders are run-of-the-mill stuff. The report on illegal firearms trafficking is fine, but we knew the red flag laws becoming a nationalized policy would become a thing. Biden is setting the stage for gun-grabbing—no doubt. The ATF move shows that, but as I said before—be watchful, be involved, and but also know that we still have a slight advantage in this fight.

Nothing divides Democrats more than gun control and the hardcore confiscatory actions the true-blue anti-gun Left wants will be proposed and then die in committee. It’s happened so many times before this is something that you could bet on with minimal risk. Now, I could change my tune as this goes along, yes—but I doubt the most insane measures will ever make it to the floor for a vote.

That being said, what Biden proposes is still unconstitutional. It;'s still wrong. It's still an assault on our rights. We have this, plus the COVID passport nonsense to fight off over the next few months. Get ready.

It's another day that ends in "y."

The Democrats still hate gun-owning Americans and want to illegally seize their private property. Remain vigilant. Call your representatives, and maybe stock up on some more items while you’re at it.