Expect Liberal Meltdown As Usual When Trump Addresses The NRA 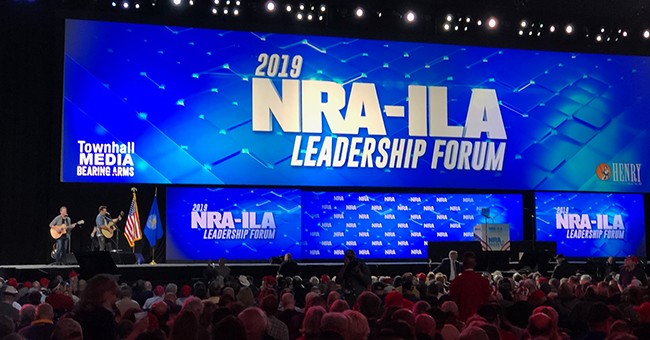 It’s here. The National Rifle Association’s Annual Meeting has arrived. And it also happened to coincide with the 2019 NFL Draft. Needless to say, it’s going to be a hectic weekend. The Institute for Legislative Affairs, the NRA’s lobbying arm, also has their leadership forum on Friday, where President Donald J. Trump and Vice President Mike Pence are slated to address this gathering of patriots who are pro-freedom, pro-Second Amendment, and pro-individual rights. Last year, the NRA wanted and expected the anti-gun Left to go berserk over the address. Expect the same this year.

In 2018, Vice President Pence challenged the liberal media to tell the whole story about guns in America. I think we can expect more of the same this year. With the Russian collusion narrative finally exposed as a myth, one should expect President Trump’s address to be epic, a definitive victory lap. The liberal media peddles straight trash about firearms and gun control on a daily basis, but it does not compare to the cesspool of lies they spewed all over when it came to spreading this story. The Mueller report took a headshot to this liberal myth. It’s over. Now, we look to defending our Second Amendment rights. For Trump, it’s looking to ensure that this aggressive, passionate, and voter conscious sect turns out in 2020. Given the Democrats’ anti-gun extremism as of late, this shouldn’t be a problem.

Look forward to seeing everyone in Indianapolis, Indiana tomorrow! https://t.co/3soeEjsMA3

Last year, the NRAAM had a record attendance. Let’s see what happens this year. The show begins at 11 A.M. tomorrow. Here's what Mr. Cox said about the president's speech at the annual meeting:

“Donald Trump is the most enthusiastic supporter of the Second Amendment to occupy the Oval Office in our lifetimes. It is truly an honor to have President Trump address NRA members for the fifth consecutive year,” said Chris Cox, NRA-ILA Executive Director. “President Trump’s Supreme Court appointments ensure that the Second Amendment will be respected for generations to come.  Our members are excited to hear him speak and thank him for his support for our Right to Keep and Bear Arms.”

And we can also thank him for likely working up the progressives to full forth, which means our friends over at Twitchy should find some gems of liberal idiocy.