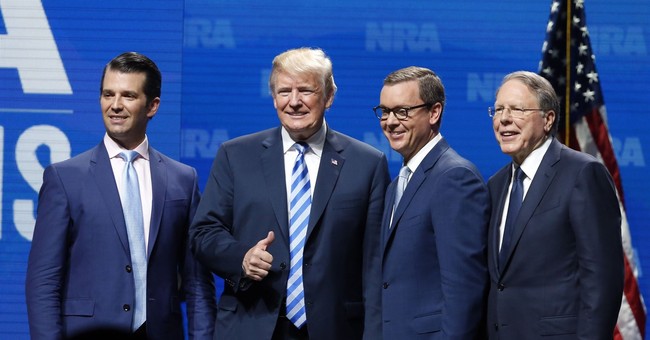 Well, the National Rifle Association’s Annual Meeting in Dallas is over—and it was a tremendous success. It set a new attendance record, with nearly 90,000 people attending the three-day conference. Speakers included NRA spokesperson Dana Loesch, Diamond and Silk, Vice President Mike Pence, President Donald Trump, Sen. Ted Cruz (R-TX), Texas Gov. Greg Abbott, NRA-ILA executive director Chris Cox, and NRA executive vice president Wayne LaPierre. Besides allowing gun manufacturers, and small business owners to showcase their latest gear and equipment, it was also time to remind Second Amendment supporters of the gathering storm: the 2018 midterms. There has been a sense of complacency after the 2016 election; the 2017 gun sales prove that. The panic was over; Hillary lost so the Second Amendment was safe. Trump won. All is well, right? Wrong. Every year is one where the Second Amendment needs to be defended. Every year is an election year. This year two GOP, NRA-friendly governors, Rick Scott of Florida and Phil Scott of Vermont, signed into law anti-gun laws into law that banned bump stocks raised the age to purchase firearms to 21, and in Vermont’s case, limited the size of magazines.

Before, after mass shootings, like the horrific one in Parkland, Florida at Marjory Stoneman Douglas High School, new guns laws would be passed in the usual anti-gun, deep blue states. That’s now leaching into friendly gun rights territory. That was the resounding theme of the convention: vote in November. If Democrats retake the House, horrible anti-gun legislation waits in the wings, with a GOP Senate is movable. It’s a risk not worth taking. Last month, there was pushback in state capitols across the country against the latest anti-gun push, with activists protesting their states’ respective push on curtailing gun rights (via AP):

From Delaware to Wyoming, hundreds gathered at peaceful protests to listen to speakers who warned that any restrictions on gun ownership or use eventually could lead to a ban on gun ownership, which is guaranteed under the Second Amendment.

“If you have a building and you take a brick out every so often, after a while you’re not going to have a building,” said Westley Williams, who carried an AR-15 rifle as he joined about 100 people braving blustery weather in Cheyenne, Wyoming, for a pro-gun-rights rally in front of the state supreme court building.

Dave Gulya, one of the organizers of a rally in Augusta, Maine, said about 800 people showed up at the statehouse — a gun-free zone — to make the point that “we are law-abiding.”

During a pro-gun-rights gathering in Atlanta… more than a quarter of the estimated 160 rally-goers carried weapons, as well as flags and signs saying “Don’t Tread On Me” as they listened to speakers talk about the right to bear arms. A few people wearing “Black Lives Matter” T-shirts showed up at the rally and made videos, but didn’t interact with the rally-goers.

Now, there was more news from the NRA. They have a new president. Retired Marine Lt. Col. Oliver North will be taking the helm of the organization (via WaPo):

Looks like the NRA is going to make Oliver North its next president. pic.twitter.com/oVUSSEh66a

Thrilled about the Oliver North news. A total warrior for freedom, this is the last person that anti-gun advocates would want as the new President of the NRA board.

Retired Marine Lt. Col. Oliver North, a central figure in the Iran-contra affair in the 1980s, has been named president of the National Rifle Association.

The NRA’s board of directors chose North to be the organization’s president Monday morning after NRA President Pete Brownell decided not to seek a second term.

“This is the most exciting news for our members since Charlton Heston became president of our association,” NRA Executive Vice President Wayne LaPierre said. “Oliver North is a legendary warrior for American freedom, a gifted communicator and skilled leader. In these times, I can think of no one better suited to serve as our president.”

North will assume the presidency in coming weeks and has retired from Fox News, where he was a commentator.

“I appreciate the board initiating a process that affords me a few weeks to set my affairs in order, and I am eager to hit the ground running as the new NRA President,” he said in a statement.