No Apologies: NRA Expects The Anti-Gun Left To Go Apoplectic Over Trump Address 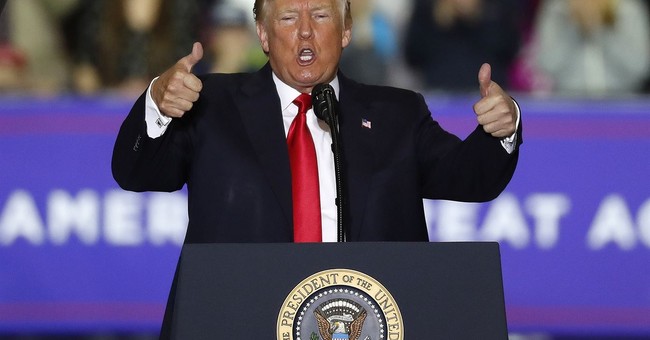 The news broke on Sunday. President Donald J. Trump will be addressing the National Rifle Association's Annual Meeting in Dallas this week. The event, which kicks off on Thursday, will have close to 80,000 people attending the three-day event. Eight hundred exhibitors will also set off shop, displaying the latest in firearms and firearms technology to those who support freedom and the U.S. Constitution.

The event will also have scores of seminars on firearm laws, concealed carry, how to engage law enforcement, and crime prevention strategies. For history buffs, there will be a seminar on the firearms used during the Vietnam War. Vice President Mike Pence has already been slated to speak, but there were rumors over the weekend that the president would also address the convention, according to White House officials. Well, the NRA has now confirmed this: President Trump will be speaking at NRAAM:

“I am honored to welcome President Trump and Vice President Mike Pence to the NRA Convention in Dallas this Friday,” said Chris W. Cox, executive director of the NRA-ILA. “While I’m sure there will be a meltdown on the Left, we will be unapologetic in our celebration of American Freedom.”

The meeting will also be a time for supporters of the Constitution and Second Amendment freedoms to unite, rally, and be reminded of the fight that’s before us. The tragic school schooling at Marjory Stoneman Douglas in Parkland, Florida set off the latest offensive on our civil rights. Instead of focusing on school safety, the anti-gun Left has hijacked yet another tragedy to push their agenda. They’ve also recruited high school students to quarterback their efforts. In times past, other states, normally anti-gun states, passed laws that further constrained gun rights. The silver lining was that it was contained to the blue states, those with already anti-gun laws on the books. Now, we’re seeing this activism leach into our areas.

Florida and Vermont both have Republican governors. Both have A-ratings by the NRA. And both men passed laws that pushed the age to buy firearms to 21. Typically it was 21 to buy handguns and 18 years of age to purchase rifles and shotguns; the latter of which is exercised by millions of 18-20 years olds, especially in hunting states. It’s a grossly unconstitutional.

Florida Gov. Rick Scott’s bill is the lesser of two evils, as the other provisions provide funding for training to arm teachers in schools, pending school board approval, more mental health services to school, and an anonymous crisis hotline. Vermont’s Phil Scott straight up increased the age to purchase firearms, banned bump stocks (Florida did as well), and limited magazine sizes, 10 rounds for rifles and 15 rounds for handguns. The 15-round limit shouldn’t impact handguns, unless you do target practice with those insanely long 20-30 round magazines, but the rifle magazine limit could be seen as a backdoor ban on military-style rifles. Most AR-15’s come with a 30-round magazine. Shipping and purchasing could be an unwarranted obstacle, even if Magpul makes a 10-round magazine for the AR-15. It’s just an unnecessary intrusion on law-abiding gun owners.

This is what needs to be discussed and reminded at the annual meeting. That even though the Right scored a huge victory in 2016, but the fight hasn’t stopped. The anti-gun Left is scoring wins at the state-level. In deep blue Illinois, Deerfield, a Chicago suburb, has all but banned firearms within its limits. Their so-called ban on assault weapons includes any firearms with a detachable magazine that carries more than ten rounds. That’s rifles and handguns. Law-abiding gun owning residents will need to move, which isn’t an option to everyone, or destroy or turnover their firearms to the authorities. Non-compliance carries a $250-1,000/ day fee.

This is what we’re up against. Every year is an election year. Every year is a fight to maintain our Second Amendment freedoms and the U.S. Constitution. The Left wants to repeal the Second Amendment. They want to confiscate firearms. They will accomplish this by using doe-eyed kids to push their talking points and gentle pitches at various town halls from anti-gun politicians. School safety, common sense gun control, etc.—all of these phrases have been tried before. We know what they mean. That’s one thing the anti-gun Left forgets about the NRA and pro-Second Amendment Americans. We vote. And if they don’t wish to see an appalling anti-gun bill by House Democrats have a second breath of legislative life, then make sure you do vote this November.