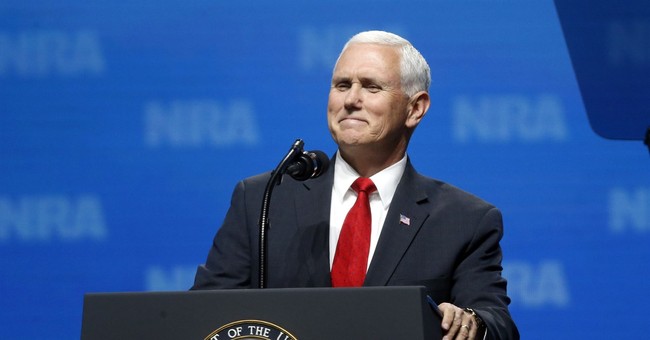 Dallas, Texas– The National Rifle Association’s Annual Meeting featured the blockbuster double-feature for Second Amendment supporters: Vice President Mike Pence and President Donald Trump. While 2017 was a bit lackluster in terms of gun sales and Second Amendment enthusiasm, the anti-gun Left has launched a new offensive just in time for the midterms. The Kay Bailey Hutchinson Convention hall was packed for both men. Pence took the stage after a few introductory words from NRA-ILA’s Chris Cox.

The vice president was blunt and straightforward. He said he was a Christian, a conservative, and a Republican in that order. Also, he’s a card-carrying member of the NRA. He added that gun rights supporters have two huge allies in the White House who support the Second Amendment without apology or exception—and vowed that those rights won’t be infringed.

There was also something else the vice president had to say: Thank you.

“And President Trump and I came here today, mostly, just to say, ‘thanks.’ Thank you for all you do to defend liberty.  And thank you for electing a President and a Congress that are making America great again,” said Pence. “Because of your support, on Election Day and every day since, you can only describe this administration one way: It’s been 15 months of promises made and promises kept. And we’re just getting started.”

Pence also touted some bipartisan and common sense school safety measures, like the Stop School Violence Act, which was passed with the support of the families of Sandy Hook Promise and the NRA. At $2 billion, it’s the single biggest investment in school safety in U.S. history.

The vice president was clear about the objective. We can defend our liberties while combatting those who seek to do harm. He also voiced his support for armed teachers in the classroom as a deterrent because the quickest way to stop a bad guy with a gun is a good guy with a gun. He also issued a challenge to the media: tell the whole story about firearms to the American people (via White House):

Let me tell you a few stories that you don’t hear much about in the national media, but they prove the point.

Like the off-duty Marine in Atlanta, in 2009, who was attending a party that was overtaken by two would-be murderers.  After the attackers separated the men and women, Sean Barner was able to get to the concealed firearm in his backpack.  He killed one and ran off the other, preventing a terrible tragedy.

Or how about the passerby outside a Philadelphia barbershop in 2015. He heard gunfire inside, he rushed in, he shot the attacker in the chest.  And the Philadelphia Police Captain said, “He saved a lot of people in there.” And he did.

Or how about the Uber driver in Chicago, the same year, who saw a man open fire on a crowd of people on a Friday night.  He pulled out his concealed weapon, he engaged the shooter, he hit the attacker multiple times, and saved the lives of people on that street that he’s never even met.

Or the story from just down the road, in Arlington, Texas, where exactly one year ago yesterday, a crazed man entered a bar, killed the manager, was prepared to kill countless others, when he was stopped cold by another patron, a fella who took his wife to dinner that night and had a firearm at his side.

I mean, the truth is that these are the stories we don’t hear much about, yet they’re the stories that America most needs to hear.

And so today, I want to call on the national media.  Start telling the whole story to the American people about firearms in this country. I mean, it’s time the national media gave our many heroes as much attention as they give to our few villains, because we should be a nation that recognizes the people who save lives much more than the people who take them.

In closing, the vice president reiterated the importance of out Bill of Rights, saying, “The Second Amendment is a shield for the rights of every American, and it’s a shield for the most vulnerable. It’s the ‘great equalizer’ that gives every American the power to defend themselves and their families against any evil in our midst.”

We have an election in November. That shield could be taking a hammering if Democrats retake the House. That was a very pervasive theme at this annual meeting: don’t forget to vote.