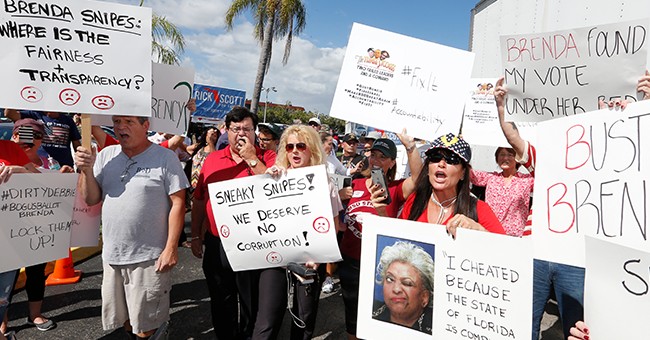 It’s official. The Florida elections are heading into recount territory. Three top-tier races, governor, senate, and agriculture commissioner, will become the focus of a legal battle that could get nasty very quickly. Most of the attention is centered on the U.S. Senate race, where Republican Gov. Rick Scott declared victory over Democratic incumbent Sen. Bill Nelson. Yet, two of the most Democratic counties, Broward and Palm Beach, in the state are taking their time counting the ballots. For reference, the counties that were ravaged by Hurricane Michael have completed counting their ballots.

Two Democrat-heavy counties have been flagrantly violating the law for ~85 hours now and defied court orders and the media narrative has been “Republicans don’t want votes counted” https://t.co/8nvt58RaYC

We have no idea how many ballots are left, something that they should have told us on a regular basis per Florida law. These two counties are the problem children in Florida elections and yes, given their histories, and what has been alleged—it’s not insane to suggest that Democrats might be stealing the election.

From the archives (1998): "Citing 'a pattern of fraudulent, intentional and criminal conduct' in the casting of absentee ballots, a Florida judge voided Miami's mayoral election today and ordered a new vote to be held in 60 days." https://t.co/S0YUaiZd6K pic.twitter.com/s6UmTdTlH0

In Broward, elections supervisor Brenda Snipes once against proves that she’s total garbage at her job, not knowing how many ballots are left, mixing rejected provisional ballots with good ones, and getting slapped by the courts again for having a ballot counting operation that violated public records laws. Oh, and both counties have refused to obey the court orderthat they honor pubic records requests.

The court order was thanks to a legal action filed by Republicans. Gov. Rick Scott, with the National Republican Senatorial Committee, filed a lawsuit against the counties over the vote count delays—a lawsuit that Palm Beach County elections supervisor Susan Bucher idiotically said might be racist. Oh, and she also threatened reporters with arrest for…filming and photographing their public canvassing meeting.

Ooh boy. Snipes counted the 205 votes, which include ~20 the canvassing board deemed illegal b/c of signature mismatches. Context: https://t.co/buQ6GbuU0G https://t.co/emmywOfPZX

Yet, how the media has reacted to these stories of incompetence and possible illegality has been par for the course. There’s no way election fraud can happen. There’s no evidence of illegal activity. The Federalist’s Mollie Hemingway noted that scores of outletsand reporters from Politico, NPR, Yahoo, The Washington Post, and the LA Timesdoled out similar stories—and noted that anything to suggest otherwise was a conspiracy theory without evidence:

Florida law also requires that vote-by-mail and absentee ballots are accounted for within 30 minutes of polls closing. While the other 65 counties in Florida had no problem following this state law, the supervisors of Broward County and Palm Beach County refused to follow that law.

Florida law also requires that the Department of State be given reports every 45 minutes until results are completely filed. Palm Beach County has refused to do this.

Despite these stunning violations of law, and Rubio’s cry to stop the madness in these counties that have a history of election problems, media seemed largely uninterested in what was happening in Florida.

Rubio reminded Americans that Broward County’s supervisor had a history of election problems, including illegally destroying ballots, secretly opening mail-in ballots, sending voters too many ballot pages, and leaving a constitutional question off the ballot.

To be clear, these are not the stories and social media accounts of official Democratic partisans, but the accounts and stories of a media that is desperate to not be thought of as “fake news.” A media that is desperate to make the case that they are something other than partisan hacks who care about elevating Democrats and harming Republicans above all other journalistic concerns. If you see even an ounce of daylight between these narrative constructions and those of Democrats, please share. Because to the naked eye, this is nothing but pure gaslighting about the obvious efforts of two of the most historically scandal-ridden counties in the country when it comes to elections and voting.

It is without question that lawful processes were not followed. To say otherwise is scandalous and insulting to the intelligence of most people. Everyone knows what is going on here and to say that there is no evidence, when evidence is obvious to everyone, including those who are pretending it isn’t there, is offensive.

A media that were something other than the communications leaders of the progressive movement would note that Palm Beach County is violating Florida law by refusing to provide required information to the public, and by illegally refusing to allow officials into the ballot counting area to observe what is occurring.

Hemingway aptly noted the irony in all of this. Without evidence, they all think the Trump campaign colluded with the Russians to tilt the 2016 election, but for the Florida elections, where there is evidence of wrongdoing, you’re damaging democracy by fighting for more transparency.

Michael Morley, a professor at Florida State University College of Law, noted something from the documents of the Scott lawsuit that should raise anyone’s eyebrows. Okay—well maybe not for Democrats because they will choose to ignore it.

For Florida's Agricultural Commissioner race, there even was allegations that election officials in Broward were filing in blank ballots, though there's confidence that DeSantis will still come out ahead during the recounts. Matt Caldwell is the Republican candidate running against Democrat Nikki Fried. She has declared victory.

Affidavit filed by Broward Election’s employee in support of Caldwell lawsuit provides eye witness account of Elections staff filling in blank ballots. When this was reported the employee was fired and told not to come back. #sayfie

The election for Governor of Fla now goes to a machine recount statewide. Because the machines are tested before elections there is no reason to expect the numbers to change significantly. There will be no manual recount and Ron DeSantis will be the next Governor of Fla. #sayfie

UPDATE: Wait—Democrats were fighting for the votes from non-citizens to be counted? Democrats say the lawyer was not authorized to make such an objection. What the hell is going on down there?

Here are lawyers for Nelson and Gillum directly arguing, Friday night in Palm Beach, that a ballot by a NON-CITIZEN should NOT be excluded.https://t.co/Z9HsIzWYYd @DailyCaller pic.twitter.com/zynSdgTdZ9

Lawyers for Florida Democratic candidates Andrew Gillum and Bill Nelson both fought to prevent a non-citizen’s vote from being excluded Friday night, according to a transcript of a Palm Beach County Canvassing Board proceeding obtained by the Daily Caller News Foundation.

Michael Barnett, chairman of the Palm Beach Republican Party, told TheDCNF that the county’s canvassing board was going through provisional ballots and quickly deciding whether to allow or disallow each. This exchange is of the first non-citizen’s vote they encountered. “We had a court reporter that we hired to sit in the proceedings, which are public,” he said.

The vote was disallowed despite the objections of the lawyers because two of the three members of the canvassing board ruled that it was an impermissible vote, he said.

Marc Elias, a lawyer for Nelson, told TheDCNF: “The lawyer who was present was not someone we had authorized to make such an objection. Non-citizens cannot vote in U.S. elections.”