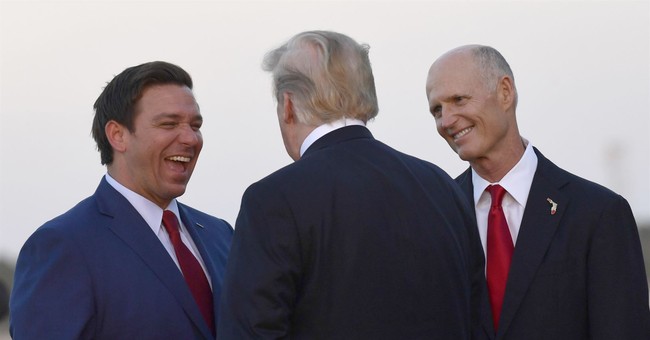 It’s a total mess. We don’t know how many ballots are left to be counted in Florida’s elections because some election supervisors are simply not telling us. Yeah, in a state that was hit hard by Hurricane Michael, the storm-ravaged counties have counted all their ballots, but two of the most Democratic counties, Broward and Palm Beach, are still tabulating votes. The lack of transparency, regular updates on vote tallies, and overnight vote dumps are raising eyebrows among Republicans and rightfully so. These two counties, Broward in particular, has a long history of incompetence, negligence, and violations of state law. The Miami Herald has more on Elections Supervisor Brenda Snipes in Broward:

How can she not know 40+ hrs later how many votes are outstanding?? pic.twitter.com/PpQmRbTZe4

Republican Gov. Rick Scott has already declared victory in the state’s Senate race over incumbent Democrat Bill Nelson, where he lead by a little over 34,500 votes at the time. That lead has been almost in half, and we’re certainly going into recount. Yet, the secretiveness of the process is suspect, especially in the largest Democratic county in the state—Broward. Yes, Brenda Snipes, can’t do her job well, but in Palm Beach, elections supervisor Susan Bucher is facing much more serious allegations of shoddy ballot counting. What did Bucher say in her defense, the lawsuit could be racist (via Washington Examiner):

JUST IN: Facing criticism from Pres. Trump, Sen. Rubio, Gov. Scott and other Republicans, Palm Beach Co. supervisor of elections says it's “unfortunate” that they “are trying to disrupt our democracy because they don’t like the demographics of our voters.” https://t.co/XgxNvfogar pic.twitter.com/CKFLNNseOa

The supervisor for election in Palm Beach County doesn’t take criticism well. Susan Bucher, a Democrat who previously served in the Florida House of Representatives, accused her critics of racism.

Bucher called the criticism from President Trump, Gov. Rick Scott, and Sen. Marco Rubio “unfortunate.” But she didn’t stop there. Winding up quickly, the otherwise lethargic election supervisor accused those Republicans of “trying to disrupt our democracy because they don’t like the demographics of our voters.”

Sure, it could always be racism. But why resort to that when the obvious explanation is right there — Bucher is just demonstrably incompetent and obviously in violation of state law.

The colorblind law validates the criticism of Bucher. According to Title IX, Chapter 102 of the 2018 Florida Statutes, she isn’t doing her job. The law stipulates that all early voting and all vote-by-mail results be reported to the “Department of State within 30 minutes after the polls close.”

This did not happen. Instead, three days after Election Day, no one even knows how many votes are left to be counted.

Oh, but there’s more. Florida State University Law Professor Michael Morely went on a lengthy Twitter thread detailing the allegations lobbed at Palm Beach County. Based on Gov. Scott’s lawsuit, Morely noted, “State law provides that, if a paper ballot is physically damaged in a way that prevents it from being read by an automated tabulation machine, election officials may make a replacement ballot to be run through the machine instead.”

The argument is that it helps curb disenfranchisement, but the power here is immense.

“In other words, election officials, quite literally, create new ballots to be counted.  Obviously, the law requires them to fill out the replacement ballots the same way, for the same candidates, as the original damaged ballots they're replacing,” says Morley.

“The process creates a real, immediate opportunity for fraud that could change an election's results. If a damaged ballot were cast for Rick Scott, for example, a hyper-partisan or corrupt official could be tempted to fill out a replacement ballot for Sen. Nelson, or vice versa,” he added. “That's why it requires the creation of replacement ballots must occur ‘in the presence of witnesses.’”

And that was the alleged problem in Palm Beach, the election officials kept the Scott campaign form overseeing this process.

“Rick Scott’s lawsuit provides sworn evidence that the Palm Beach County Supervisor of Elections prohibited his campaign's reps from monitoring the creation of replacement ballots. Election officials are filling out new ballots, but the candidate's reps apparently couldn't see,” said Morley as he tied up his thread. Alas, the reason why the whole process needs to be transparent.

This afternoon a judge ruled that Broward’s ballot counting operation violated open records laws, and that they must comply with all previous requests by 7 P.M. tonight.

A last thing about the total trash racism angle, these people know that their state went for Obama…twice. Sen. Bernie Sanders (I-VT) had a similar take, saying that white voters in the state weren’t necessarily racist, but weren’t uncomfortable with black candidates, or something. Maybe…and I’m just throwing this out there—it’s because the Democrats have policies that are total garbage:

And what were the Democrats offering?

[Andrew] Gillum [Democrats’ gubernatorial candidate] has the taint of corruption on him after an FBI investigation into bribery in Tallahassee revealed that, while mayor, he accepted gifts from a man he thought was a favor-seeking developer but who was in fact a federal agent. One of Gillum’s campaign aides infamously denounced Florida as a “cracker state” — who is bringing race into the campaign again? — and Gillum ran on a far-left platform of abolishing Immigration and Customs Enforcement, jacking up the minimum wage to $15, single-payer health care, and tax increases. Put him alongside Senator Elizabeth Warren and you’d have as airtight proof as you could ever ask for that political stupidity transcends all racial barriers.

But that is the strategy to which the Democrats have committed themselves. Republican health-care reform? Racist. Regulatory reform? Racist. Defending the borders from an army of foreign nationals marching toward the United States with the stated objective of overrunning our security measures? Racist. Tax cuts? Racist.

Can’t imagine why they lose.

And I’m okay with Democrats losing. They may have retaken the House with the slimmest of majorities, but these are areas that Republicans can easily retake in 2020.

Well, It Looks Like Ocasio-Cortez Flipping Out at Joe Biden Over an Immigration Issue Worked