Outrage Overload: This Is How Liberals Went Berserk Over Trump's SCOTUS Nominee 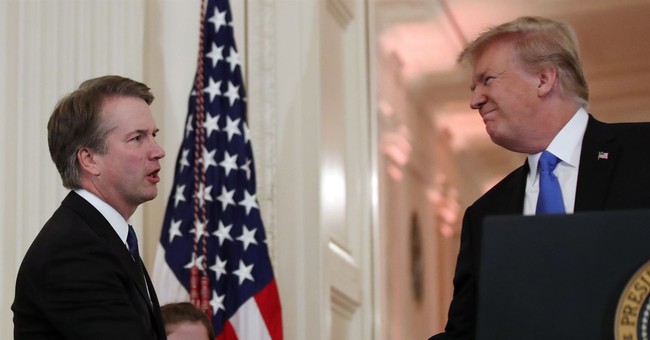 Last night, President Donald J. Trump selected Judge Brett Kavanaugh of the D.C. Circuit Court of Appeals to be our next associate justice for the Supreme Court. He’ll be filling the vacancy left by retiring Justice Anthony Kennedy. It was a highly anticipated decision. The composition of the Court will lead decidedly towards the right if Kavanaugh is confirmed. Hearings are scheduled for the summer, with final vote in early October—just in time for the midterms.

Yet, even before the announcement was made, the Left was going berserk. They had a full-blown meltdown when Kennedy announced his retirement shortly after the official end of the 2017 term. The news broke a little after Janus v. AFSCME was decided, dealing a blow to public sector unions squeezing non-union members for dues. It’s now an unconstitutional practice to force non-members to pony up money for activities they don’t support—and labor unions do a lot of that. The chances of an aftershock post-SCOTUS announcement were high, and it’s still not over. We should expect more insanity today and for most of the week.

Still, last night saw some very popcorn-worthy drama from the Left. Even before he was selected, the media was characterizing the pick as “controversial.” MSNBC spent a segment discussing ways in which liberals can derail this nomination. The Handmaid’s Tale, which no one watches, is now a reality…in the minds of the unhinged progressive Left. Sen. Chuck Schumer (D-NY) said he’s going to fight Kavanaugh with everything he’s got, which isn’t much to begin with. He’s going to repeal Roe v. Wade, which is liberals’ only concern. He’s anti-worker. And he’s also a pro-gun extremist—whatever that means. Oh, yeah, he’s white; that’s problematic. Great Odin’s raven, people!

First, and I’m whipping out my person of color card here, how do I put this delicately: I don’t give a crap. Shoot me, but I grew up under the principle of the best person for the job should get the position. With this job, it’s that, plus experience and impeccable legal credentials, all of which Kavanaugh has and then some. So, it was the usual suspects that went apoplectic last night: former Clinton operatives, the AFL-CIO, NARAL, Center for American Progress, Democrats, anti-gun activists, pro-abortion activists, billionaires who want to impeach Donald Trump, and identity politics adherents. In other words, it was a literal parade of horribles.

Fox News host Shannon Bream was planning to broadcast her show live at SCOTUS last night, but protests organized by NARAL outside of the building created an unsafe atmosphere. She hosted her program inside the safety of the Fox News studios.

Elections have consequences, liberal journalists, writers, and politicians; and you guys lost. Deal with it. And yes, this could be a bloody fight. This could be a long summer of every dirty trick in the books being used to stop this nominee, or it very well could be a pushover. Democrats don’t have much to work with other than hope that Sen. Susan Collins (R-ME) and maybe Sen. Lisa Murkowski (R-AK) defect. We’ll see what happens. More meltdown coverage will come shortly I’m sure. In the meantime, enjoy the compilation below. It’s quite extensive:

Tonight on Nightline, @TerryMoran reports on the controversial Supreme Court Justice pick and the possible implications for the country. pic.twitter.com/sXES8hxr65

Very few times I’ve felt threatened while out in the field. The mood here tonight is very volatile. Law enforcement appears to be closing down 1st Street in front of SCOTUS.

Literally had to bail on our live show from #SCOTUS. Moving the show back to the safety of the studio. See y’all at 11p @FoxNews https://t.co/ChIOQdBBTU

“Gotta be prepared,” one protester told me proudly?? pic.twitter.com/s1yjx0hKOO

A vote for Brett Kavanaugh is a vote to overturn Roe v. Wade and gut the Affordable Care Act. RT if you oppose the criminalization of abortion and believe health care should be a right for all, not just a privilege for the few. #WhatsAtStake pic.twitter.com/cs8uzGJdSq

Lol one of @NARAL’s chief complaints in its Kavanaugh press release is that he *heard a case* from Priests for Life. He’s getting confirmed, folks. pic.twitter.com/DPNudV5uQx

It's about time a conservative white man catches a break in this town.

That’s very different than being a Supreme Court Justice pic.twitter.com/JiCGhqBwVV

The nomination of Judge Brett Kavanaugh will threaten the lives of millions of Americans for decades to come and will morph our Supreme Court into a political arm of the right-wing Republican Party.

The #SCOTUSPick should be asked their views on sexual harassment, the #MeToo movement, and specifically the long list of allegations against the person who nominated them. #SCOTUS is going to hear many sexual harassment cases and we need to be able to gauge the nominee's views.

There will be a big protest organizing at the supreme court tonight at 9:30PM organized by @NARAL.

It’s vile that we live in a country where women are still expected to calmly explain why criminalizing abortion kills us.

JUST IN: A shouting match has broken out between protesters at the Supreme Court moments after @POTUS nominated appeals court judge Brett Kavanaugh. #ScotusPick https://t.co/rgOSkls2Xw https://t.co/PGf136mLdQ

I will oppose Judge Kavanaugh’s nomination with everything I have, and I hope a bipartisan majority will do the same. The stakes are simply too high for anything less.
Read my full statement on #WhatsAtStake: https://t.co/BYtcB3LWWB #StopKavanaugh pic.twitter.com/5f2Bomxltb

BREAKING NEWS: Brett Kavanaugh is Trump’s choice for the Supreme Court. Kavanaugh will perpetuate the will of Trump and eliminate the last check on Trump, who has stomped on Americans’ rights with impunity. #SaveSCOTUS #StopKavanaugh

Make no mistake: Brett Kavanaugh is a direct threat to our civil and human rights and is unfit to serve on our nation’s highest court. Here's our statement on his nomination: https://t.co/FmPaXZwHgx#SaveSCOTUS #StopKavanaugh pic.twitter.com/hXJnYdsu1W

Judge Kavanaugh has a dangerous track-record of protecting the privileges of the wealthy and powerful at the expense of working people. Any Senator who believes #SCOTUS justices should protect the rights of all Americans should reject #ScotusPick pic.twitter.com/5P1FMID691

Kavanaugh would bring all of Trump’s worst qualities to the Supreme Court for decades to come.

.@realDonaldTrump wants to use the Supreme Court to undo what makes our country great. With his choice of Brett Kavanaugh, the Affordable Care Act is in danger. Voting rights and workers' rights are under threat. A woman's right to choose is on the line. #WhatsAtStake

BREAKING: Trump has nominated Kavanaugh to the Supreme Court. If confirmed, Kavanaugh could have a massive impact for generations on things that our families hold dear. We must #StopKavanaugh #SaveSCOTUS #WhatsAtStake https://t.co/Zfw24ZWBp3 pic.twitter.com/IlANwzHWx6

With Brett Kavanaugh as his SCOTUS pick, Mr. Trump is trying to force his repressive, bigoted agenda into our courts—and our lives. If confirmed, American citizens will hemorrhage basic rights, and corporations will have an open door for a hostile takeover.

BREAKING: Trump has nominated Judge Brett Kavanaugh to the Supreme Court. No one under investigation for conspiring against the US should ever be able to nominate anyone for anything ever. There should be #NoSCOTUSvote until after the November election. Let the people decide!

The nomination of Judge Brett Kavanaugh to the Supreme Court is alarming & I’m strongly opposed to his confirmation. #ScotusPick

Judge Kavanaugh had barely started to give his acceptance speech when libs started politicizing his daughters.

It will only get worse from here. pic.twitter.com/1poNJTA87a

As good as the visual when seven men decided it? https://t.co/9n47xkB9Ip