Scare America: The Left's Affinity For Abortion Has Spurred One Helluva Propaganda Campaign 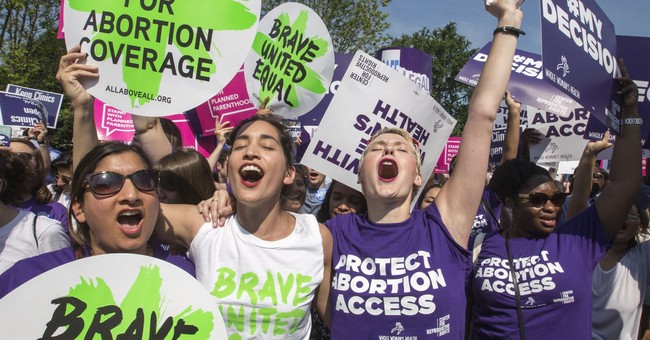 Tonight is the night. Abortion rights are going to be revoked, a totalitarian theocracy will be established, and Roe v. Wade is going to be overturned. This is all going to happen…in the minds of liberals in about a few hours. It’s the The Handmaid’s Tale come true for liberals, based on a show that no one watches from a piece of literature that is not new. Conservatives are in an excellent position to have a solid majority on the Supreme Court for the next generation. The abortion scare campaign is one to behold. I mean talk about having healthy helpings of popcorn for this show.

Irin Carmon wrote in The Washington Postthat this is the end game, though one that is being played at an incremental pace:

You will hear, this week, that abortion rights advocates are being hysterical. A certain amount of disingenuousness has long larded conversations about abortion and the court, but the gaslighting since Kennedy announced his retirement has been unusually shameless. (President Trump said he will announce his nominee July 9.) Fearing Roe’s end, claimed Carrie Severino of the Judicial Crisis Network — as crucial a group as any in getting Trump’s judges confirmed — is “a lot of scaremongering. . . . And I think it’s unlikely that the court would ever get that square question presented to it anyway.” Trump dropped the usual campaign code words in 2016 to openly promise to appoint justices who would overturn Roe and even provided a list of potential picks. In office, though, he’s suddenly learned to stick to talking points, now claiming he won’t ask prospective nominees about their stance on it.

Don’t be fooled. Trump purchased conservative loyalty with his judicial appointments — by their own account, it’s how he got antiabortion leaders to switch from urging supporters to vote for anyone but Trump to heading his “Pro-Life Advisory Committee” in the span of months — and he has been unusually faithful in keeping up his end of the deal. In the same breath that conservative legal activists insist they aren’t demanding any particular result on abortion, they exult in the chance to hack at Roe and reassure one another that a given member of Trump’s shortlist is not a heretic on abortion.

Sure, conservatives have to provide rhetorical cover for the two abortion rights moderate Republicans in the Senate whose votes will be pivotal to any nominee, Sens. Susan Collins (Maine) and Lisa Murkowski (Alaska). But these activists aren’t stupid — even if they’re acting like we are.

The real argument among the people trying to ban abortion in the future is over strategy and pace, long the subject of fierce debate in antiabortion circles. Should opponents of abortion rights go incrementally (restrictions on clinics passed in the name of safety, 20-week bans premised on disproved claims of fetal pain, days-long waiting periods) or for politically cathartic but heretofore quixotic bans (at fertilization, at fetal heartbeat, or any other gestational age that is not the current legal standard of viability)? The answer, so far, has been all of the above, with varying factions managing to pass more than 400 restrictions on abortion at the state level in the past seven years alone.

Yeah, and restrictions on abortion are popular, as is the 20-week ban which is favored by 60 percent of American women. Still, rumblings of Roe v. Wade’s death have been rumbling since 2016. So, with that possibility now on the horizon, especially after Trump’s upset win, liberal groups are freaking out. CNN’s Jeffrey Toobin said that abortion could be illegal within the next 18 months. Yet, The Wall Street Journal threw cold water on this nonsense, noting that every time a Republican is in a position to nominate a Supreme Court justice, Roe panic sets in—and yet there has been no movement on the court to ditch it. The decision stands. It’s a great way to whip up the legions of single, college-educated women that dominate the urban areas, fill the coffers of EMILY’s List, and get Democrats excited over abortion. No doubt that fundraising will increase over this SCOTUS fight. In all, the message is have no fear; Roe v. Wade—for better or worse—is here to stay:

he first thing to keep in mind is that this is what Democrats and their media allies always say. They said it in 1987 when Justice Kennedy was nominated. They said it in 1990 about David Souter, again about Clarence Thomas in 1991, John Roberts and Samuel Alito in 2005, and Neil Gorsuch in 2017. They even claimed the Chief Justice might overturn Roe because his wife is a Roman Catholic. Mrs. Roberts is still waiting to write her first opinion.

The liberal line is always that Roe hangs by a judicial thread, and one more conservative Justice will doom it. Yet Roe still stands after nearly five decades. Our guess is that this will be true even if President Trump nominates another Justice Gorsuch. The reason is the power of stare decisis, or precedent, and how conservatives view the role of the Court in supporting the credibility of the law.

Start with the Court’s Obergefell ruling that legalized same-sex marriage in 2015. The ruling was only 5-4 and Justice Kennedy wrote the majority opinion with a formidable dissent by Chief Justice Roberts.

Yet there’s almost no chance the Chief would reverse Obergefell now. Tens of thousands of gay couples have been married across the U.S. since the ruling. They have changed their lives based on it. Is the Court now going to tell those couples that states can declare their marriages void? Or that their property rights under marriage laws are no longer valid?

A key part of the Court’s stare decisis calculation is “reliance interests,” or how and how many people have come to rely on a precedent.

Our view, supported by more than a little reporting, is that even though they think Roe was wrongly decided, most of the current conservative Justices would shy from overturning it and handing abortion law entirely to the states. The exception is Justice Clarence Thomas, who has made his intentions clear.

Scientific advances have made abortions easy to obtain through medication in the early weeks of pregnancy, and making them illegal would create an enormous social uproar and invite an attack on the Court that Chief Justice Roberts in particular would not want.

No one on Mr. Trump’s list of nominees will claim to want to overturn Roe—and not because they are lying. In their caution and deference to precedent, they will be showing proper conservative respect for the law and the reputation of the Court.

What about the Abood decision that overturned 41-years First Amendment precedent concerning public sector union dues? It’s an outlier, it’s been seen as such, and as the Journal’seditorial board noted, “Survived by a single vote even as the Court struck down other examples of speech coerced by governments.” The recent Janus v. AFSCMEfinally settled this dispute, delivering a blow to organized labor and solidifying a win for free speech, but I digress.

The war over abortion is probably not going to be settled with this court. They’re not going to overturn this landmark decision that torpedoed any consensus on this matter. Yet, what the WSJ noted is that restriction on the practice will probably be upheld, which us where the country is anyway. Yes, upholding Roe v. Wadeis popular—and support for abortions in the first trimester abortions are popular as well, but second trimester and late-term abortions are deeply unpopular. And the Democratic Party on the Hill has shifted towards supporting this extreme position of backing any abortion—no matter what time frame. As with any debate, there are multiple layers, and on abortion, it’s the ultimate onion—endless layers each with more nuance than the last. For Democrats, it’s easy to set off fundraising emails, create talking points, and generate a narrative based on the polling support for Roe, though they ignore the latter parts of the poll showing healthy support for restrictions. For social conservatives, this is a moral crusade. Abortion is wrong. It must be overturned.

The Journal cites the anti-abortion crowd viewing this fight as the battle akin to the repeal of Plessey vs. Ferguson, that held that race-based separate but equal laws were constitutional for nearly 60 years. With abortion, there are societal factors, economic ones, scientific advances, and other nuances that make these two fights very different. Opening access to public places, transportation, education, and other aspects of civil society is as simple as changing a regulation on the books. It’s a clear-cut fair and unfair issue. Abortion is not like that.

Do I want Roe repealed? On principle, yes--but that time might have passed us by. As the last Justice Antonin Scalia noted, reinventing the wheel is not an option. At a lecture for UC-Hastings College of the Law in 2011, the late justice said that even if some law clerk found that Marbury v. Madison was incorrect—too bad. We have moved on. Then again, while Scalia takes stare decisis on a host of cases with whom he may have disagreements, Roe is a special exception since that case makes him more of a legislator, a role that he cannot accept.

If people want a right to an abortion, his remedy was simple: pass a law. The Constitution doesn’t say anything about it. You want a right to an abortion, or want to abolish the death penalty, sell it to the people. There is nothing in our founding document that prohibits such laws. Elections and ballot boxes push society forward, not the courts. Then again, with this band of progressives, finding popular support for an abortion bill they want would be trying. Is it a sign that maybe Roe was bad? Sure. But you win some and you lose some. For Roe, maybe the fight is more grounded in keeping the practice legaland rare. Also, if the Court decides to go down this road, the blowback could be biblical, especially when the times comes—and there will be a time, when liberals are in the driving seat in setting the Supreme Court’s direction. Forget abortion rights, gun rights, free speech rights, and religious freedom could be on the chopping block in a fit of revenge a generation or more in the making.

Yes, this is a long game. Now, for those who want Roe repealed, I get that you won’t stop the fight. You shouldn’t if that’s what you believe. But focus on the consensus right now and consolidating that, which is abortion is legal, but strict restrictions are fine. Bolster the feelings about abortion, as something that isn’t pleasant and utterly tragic. Make sure the laws enforcing the consensus are well grounded and accepted, and slowly work on repealing Roe. This has always been a generations-long fight. It might not happen in this slice of time, but maybe being the generation that laid down the groundwork for its eventual repeal could be an equally honorable chapter. The only setback for this generation of anti-abortion activists is that they won’t be around to see Roe’s repeal should that time come in our history. There are other intense legal fights over free speech and gun rights that have to be fought as well.

In the meantime, the Left is doing a bang-up job in their abortion advocacy--said by no one: