Claire McCaskill Is The Most Vulnerable Red State Democrat, But One Man Could Save Her 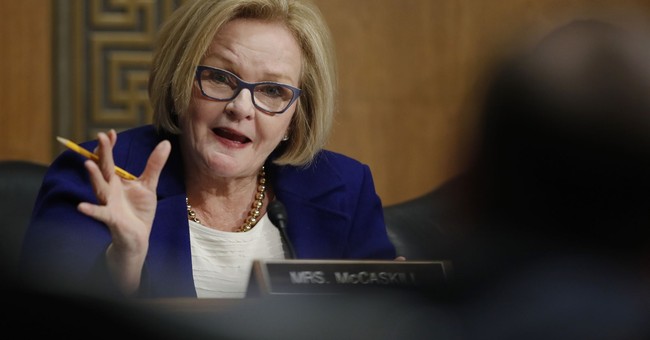 It’s official. Sen. Claire McCaskill (D-MO) is the most vulnerable Democrat running for re-election. In A new Morning Consult poll, only 29 percent of Missouri voters believe she deserves re-election; 53 percent want someone else (via St. Louis Post-Dispatch):

The poll showed McCaskill with a 38 percent approval rating and 45 percent disapproval, with 53 percent saying it was “time for a new person” in the seat. The poll, taken between February and April, also showed that 29 percent believe McCaskill deserves re-election.

By contrast, Sen. Jon Tester, D-Mont., another Democrat up for re-election in a state won by Trump, had a 54-34 positive to negative rating in the poll, with 43 percent saying he deserved re-election.

Trump-aligned political committees have been attacking Tester on television in Montana for Tester’s role in the demise of the nomination of Trump’s Veterans Affairs choice, Dr. Ronny Jackson.

McCaskill has been threading the needle to hopefully win re-election. She voted to confirm CIA Director Mike Pompeo for secretary of state. Bashed Hillary Clinton for trashing rural voters in her excursion to India earlier this year. Over there, Clinton said that the U.S. did not deserve Donald Trump as president, that she won the areas that mattered, and that supporters of the president were backwards, misogynist, and racist. It’s deplorables reloaded. It’s the longer version of that remark that further cast her campaign in a negative light. As anyone could tell you, it’s probably not the best to run a national campaign by automatically writing off half the country.

Yet, McCaskill said that Hillary was an easy choice for president in 2016. She also says she would keep the middle class tax break in Trump’s tax package if the Democrats retake Congress; she voted against those break last December when the bill was signed into law (via St. Louis Post-Dispatch):

“So there are parts of it that I would look at, but I would never touch the parts that are actually delivering savings to the majority of the people in my state," she said.

Republicans have pushed the tax cuts, which could add $1.5 trillion to the deficit, as economy-spurring relief for taxpayers at all income levels. But McCaskill and all the other Democrats in Congress voted against it, and those Democrats campaigning for re-election are attacking the measure as tilted toward the rich.

Senate Democratic Leader has made repealing cuts as a priority for his caucus, and Sen. Chris Van Hollen, D-Md., the chair of the Democratic Senatorial Campaign Committee, is urging Democratic Senate candidates to focus on the tax measure.

Over 250 businesses have benefitted from the Trump tax bill, including over three million workers, who have received bonuses on average of $1,000. In some cases, that figure has risen to $3,000. Working and middle class families are going to be getting a break for the next eight years. The Washington Post admits that; Sen. Bernie Sanders (I-VT) admitted it. For three families, from very different backgrounds, CBS News found that all of them would save under Trump’s tax plan. It’s a pro-middle class tax bill that McCaskill voted against. With the tax bill rising in popular support, the Democrats have resorted to pathetic attacks, namely that it’s unpatriotic.

McCaskill is also trying to have it both ways by criticizing Hillary for her deplorables 2.0 remarks, positioning herself as a Democratic defender of rural America, while taking money from the Hollywood Left who despises her constituents. McCaskill had a Beverly Hills fundraiser last weekend. So, one could see why McCaskill’s numbers are dropping, yet she could also end up being one of the luckiest politicians out there. There is one man who could potentially save her and he's not the first one.

In 2012, she was also beatable, but former Rep. Todd Akin, the Republican Senate candidate, blew his foot off with his idiotic remark about rape. It was a legitimate disaster, and she won. Now, with all of this political ammunition to use against her, another Missouri Republican could become her political lifeboat again: Gov. Eric Greitens. The governor has become embroiled in a lurid sex scandal. He has refused to resign. The details of the scandal are quite unsettling, as it now includes a sexual assault. Josh Hawley, the Republican state Attorney General and presumptive candidate to take on McCaskill has called on the governor to resign (via The Atlantic):

The man at the top is in trouble. The attorney general, a member of his own party, won’t defend him. There’s talk of impeachment. Republican legislators are restive and fear that he’s putting their electoral chances at risk. The exec himself remains defiant, insisting he’s the subject of political witch hunts and fake news.

This sounds a lot like what’s happening in Washington, but it’s also what’s happening in Jefferson City, as the crisis facing Missouri Governor Eric Greitens deepens. The state’s attorney general and the majority leader in the state Senate have both called for Greitens to resign after the release of a damning report this week by the state House Special Investigative Committee on Oversight, a bipartisan team.

Greitens, a Republican, was indicted in February on allegations that he took a picture of a woman with whom he had an affair in order to use it as blackmail, keeping her from revealing the liaison. (Her now ex-husband recorded her describing the incident, then leaked the tape.) The allegations laid out in the indictment were bad enough, and amounted to a felony, though Greitens denied them.

But the report released Wednesday [4/11/18] is much worse. It describes not only an invasion of privacy, but a sexual assault. The woman describes feeling she could not leave Greitens’s house without having sex with him. The committee deemed her “an overall credible witness” after interviewing her.

That invasion of privacy trial begins next week. The prosecution has obtained a warrant to search his Google account. The Kansas City Star editorial board, among others, has joined the chorus of resignation. As long as Greitens remains in office, his toxicity could spread to the rest of the GOP and potentially help McCaskill secure another term. It’s happened before.