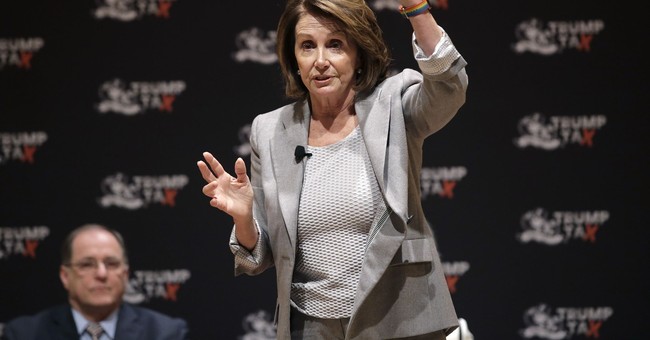 On Tuesday, Rep. Nancy Pelosi (D-CA) and Rep. Raul Grijalva (D-AZ) held a town hall to cobble support to repeal of the so-called Trump tax. Yeah, talk about an ill-timed event. The New York Times’ new poll showed something that should give Democrats pause: the Trump tax bill broke 50 percent. Right now, 51 percent of Americans approve of the bill, far from the dismal numbers that were reported upon its passage in December. It’s clinched majority support and guess what; Armageddon didn’t happen. Over three million Americans have received a bonus of at least $1,000. Some companies have doled out more. In some cases, workers are getting $3,000 bonuses. More benefits are being offered, wages have gone up, philanthropic giving is set to increase, and companies are re-investing back into America. Over 250 companies have doled out bonuses to their workers—and they have seen those increases in their paychecks (via NYT) [emphasis mine]:

Colleen Doering, who runs a small facilities maintenance business outside Orlando, Fla., said she and her husband were paying several hundred dollars a month less in taxes because of the new law. As a result, they recently decided to spend $10,000 on a landscaping project and started to plan a vacation.

“My paycheck has increased, and if I see it in my paycheck, then I know my employees are seeing it in theirs,” Ms. Doering said.

So, how do Democrats respond? Well, they couldn’t because they were too preoccupied eating crow—mountains of it in fact. Every single Democrat voted against his measure that cuts taxes for middle and working class Americans. Eighty percent of Americans are going to benefit from this bill. Ninety-one percent of the American middle class is set to benefit from this bill and the great game of moving goal posts began. Sen. Bernie Sanders (I-VT) said over Christmas that it’s a good thing the middle class is getting a cut, but this bill doesn’t go far enough. In short, they’re pushing the tired taking point that this is a giveaway to the wealthy and corporations. It’s flunked. Approval has done nothing but gone up since President Trump signed this bill into law. People see they they’re benefitting. They see it’s not coming at the expense of their well being. Now, Democrats have taken to calling the bonuses “crumbs,” thumbing their noses at the working class, saying in not too subtle terms that they’re too dumb to understand that they’re being taken for a ride by the GOP and too poor to invest and start saving. That’s great messaging, you guys. Really—and you still wonder why you lost the 2016 election. There is also division on how to respond to the mounting good economic news, with some Democrats saying that denigrating the bonuses that are giving working class families relief isn’t the way to go (via Axios):

Rep. Keith Ellison (D-MN)': "I would not describe it as crumbs," Ellison told Business Insider. 'The income inequality is so bad that if you could pick up 1,000 or 900 bucks, maybe it helps."

Rep. Ben Ray Luján (D-NM), chairman of the Democratic Congressional Campaign Committee: "I recognize that something was in there. And where I come from, anything makes a difference," Luján told CNN.

Rep. Joe Crowley (D-NY): "I think for people making $40,000 a year, any increase in their take-home is significant for them, and I don’t want to diminish that at all," Crowley said at a press conference.

Rep. Emmanuel Cleaver (D-MO): "Language is important, and we have to be very careful that we don’t insult people by saying that the amount of money they get is crumbs," Cleaver told Politico. "We cannot be seen as patricians."

John Yarmuth (D-KY): "I would say it differently," Yarmuth told the Washington Examiner. "I wouldn't say a couple thousand dollars a year is 'crumbs.'"

Oh, but Nancy has a new one. The GOP tax bill is unpatriotic (via NTK Network):

House Minority Leader Nancy Pelosi (D-CA) stepped up her rhetoric regarding the GOP tax bill Tuesday, calling it “unpatriotic’ during a town hall in Texas.

“We could have, as we’ve done before, written a tax bill in a bipartisan way that had transparency that people could see what it was about,” Pelosi said about the GOP tax bill.

Pelosi said that instead, Republicans passed the GOP tax bill in the dead of night so that America people would not know about the legislation, allowing Republicans to “pin a rose on it,” as she described it.

A participant at the town hall interjected that it was unpatriotic.

“It’s unpatriotic,” Pelosi agreed. “I wish we could have come together to do a fair tax bill, but it is about our country.”

Pelosi then said that the GOP tax bill was “undermining” American democracy.

Yeah, it’s “unpatriotic”…is that why a majority of Americans now support it? If I was a Democrat, I would be very worried that this woman, who has proven to be a serial failure when it comes to retaking the House, is quarterbacking the midterm effort.

Pelosi went on to discuss income inequality, detailing the history between the executives and workers, where she again stepped in it when she said that God didn’t intend to have one class living in total luxury while the rest are condemned to economic destitution. The Pelosi family has a net worth of $100 million (via Fox Insider):

Rep. Nancy Pelosi was heckled by a woman at a town hall event Tuesday after she continued blasting President Trump and Republicans' tax cuts.

"God never intended one group of people to live in superfluous inordinate wealth while others live in abject deadening poverty," the House minority leader said, adding that the quote was from Dr. Martin Luther King.

As she finished her sentence, Pelosi was interrupted by a woman in the Phoenix, Arizona, audience who asked "how much are you worth, Nancy?"

"Are you in abject poverty?" the woman shouted at Pelosi, who is routinely listed among the wealthiest members of Congress.

So, when Democrats can’t win, they just say whatever they’re against is racist or unpatriotic. Sounds like par for the course.