The Terror Continues: Walmart, Cox Comms Dole Out Bonuses To Workers Thanks To Trump's Tax Bill 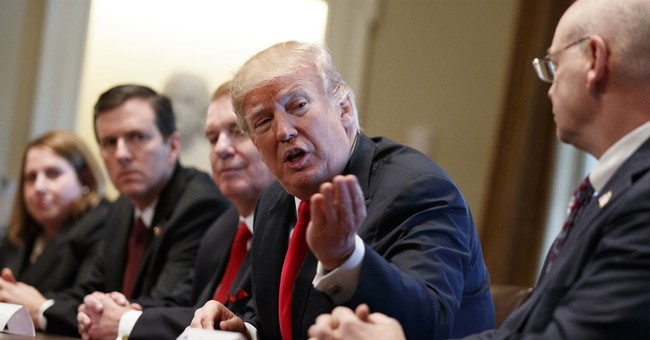 On December 22, 2017, the world ended—if you’re a Democrat. The Trump tax bill was signed into law. Every Democrat voted against it. They said it was the worst piece of legislation to ever come across Congress. They said it was a corporate giveaway. There is no way any good could be bestowed on working families with this bill. For a bit, this propaganda worked. The tax bill’s approval numbers were dismal, which is why Democrats probably thought they could use it for the 2018 elections.  A massive, unpopular tax bill as an albatross around the GOP’s neck, plus the historical trend that the party in power does poorly in midterm elections—this was a shoo-in right? Well, no. As of now, we’re around eight months away from the 2018 midterms. That’s like five millennia in politics, a huge amount of time. Even The Washington Post was not as optimistic about the tax bill being political poison, adding quite early on that the bill is likely to become more popular.

And it has; a recent New York Times/ SurveyMonkey poll showed the bill’s approval at 51 percent. It clinched majority support after registering at 37 percent approval in December. In that period, over 250 companies have doled out bonuses to over three million workers. These bonuses range from $1,000 to as high as $3,000. Companies are reinvesting back into America and boosting philanthropic giving. A better job creating and investing environment has been birthed from this bill. Eighty percent of Americans are going to benefit from this legislation, including 91 percent of those who are considered middle class in this country. It’s a point that CNN’s Jake Tapper pressed Sen. Bernie Sanders (I-VT) on last Christmas. Sanders said it’s good these people are getting a break, but it doesn’t go far enough. Talk about moving the goalposts. Sens. Elizabeth Warren (D-MA) and Joe Manchin (D-WV) have all eaten a bit of crow since this bill’s passage.

How does the Left respond? By denigrating working and middle class Americans, saying their bonuses are crumbs, as if to suggest they’re too stupid to start saving and dare I say recognize that they’ve been had by the GOP. Or could it be that it’s just sour grapes, with Democrats now a bit worried that their grand plan to use the tax bill against Republicans in 2018 might not be so easy. I mean how else can you explain why Rep. Nancy Pelosi (D-CA) has said this bill, that was a major tax break for the middle class, is unpatriotic. It’s pathetic desperation.

For now, the terror this bill is inflicting upon working people continues, as Cox Communications and Walmart have announced they’re going to dole out bonuses to their workers. In Louisiana, 37,000 Walmart employees will see an increase in their paychecks (via the Advocate):

Walmart workers in Louisiana will receive about $13.7 million in bonuses this week, a combination of performance-based and one-time cash bonuses the company attributed to recent federal tax cuts.

Walmart, which operates 139 stores and employs more than 37,000 in Louisiana, said the bonuses are included in workers’ March 8 paychecks.

Of the $13.7 million, $9.5 million comes from one-time cash bonuses to certain employees who have worked for Walmart for more than 20 years. That move was announced in January, along with a bump in starting pay for workers to $11 an hour. About $4 million of the total came from fourth-quarter performance-based bonuses.

In Arizona, 3,200 Cox employees will also see a bump in pay, with bonuses also being available to nearly 60,000 workers who are within the larger Cox Enterprises conglomerate (AZ Republic):

Cable company Cox Communications is joining corporations nationwide by offering its 3,200 Arizona employees bonuses of $1,000 to $2,000 this year thanks to the recent federal tax overhaul, the company said Thursday.

Cox said the bonuses will be available to almost 60,000 Cox Enterprises employees nationwide, and the size of the bonus is based on tenure.

"This change in the tax rate favorably affects our cash flow and allows us to accelerate investment in infrastructure, technology and product development," the company announcement said. "Sharing some of those tax reform benefits with our employees is the right thing to do and a way we can thank our employees for their hard work."

Oh, the horror! The horror! If more good news comes from this tax bill, and I’m betting that it will; this coupled with the Democrats doubling-down on gun control could make 2018 very interesting.