Manchin: So, it Looks Like the Tax Bill I Voted Against Will -- Um -- Help A Lot of West Virginians 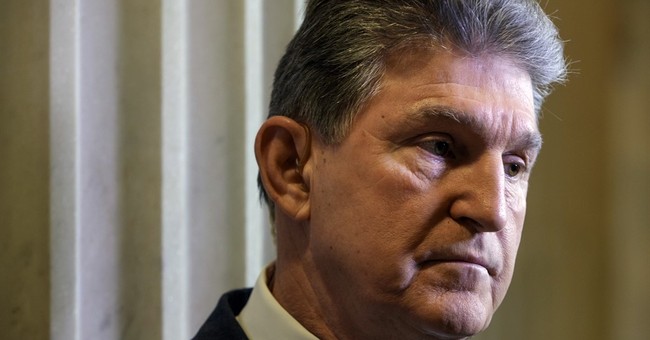 Of course it will, Joe.  More than 80 percent of Americans will get a tax cut next year under the new law, with nearly as many taxpayers enjoying relief through at least 2026 (and very likely beyond).  Of the plan's tiny handful of 'losers' (less than five percent), most are high-income earners living in high-tax states who itemize their deductions -- as opposed to taking the now-doubled standard deduction, as 70 percent of filers currently do (a number that will grow).  It...doesn't sound like many West Virginians fit that profile.  Manchin knew all of this, of course, but he voted with Chuck Schumer anyway, just as he's refused to help Republican Senators confirm a number of highly qualified judges nominated by President Trump.  Confronted with his tax reform vote on local radio, Manchin struggled to defend his decision:

Sen. Joe Manchin, D-W.Va., on Wednesday struggled to explain his opposition to the Republican tax overhaul, conceding in a local radio interview that it contains “some good things” that could benefit his state. “There’s some good in this bill. I acknowledge that,” Manchin said, when West Virginia radio talk show host Hoppy Kercheval asked the senator why he opposed legislation that will benefit the “vast majority” of taxpayers and businesses in the state. “The things that you mention are correct. Initially people will benefit and see some changes in their taxes,” Manchin admitted...At times, it appeared that Manchin was wrestling with his answers, trying to justify his “no” vote without being too critical, and antagonizing Trump...Trump still has high approval ratings in West Virginia, a state he won over Democrat Hillary Clinton by nearly 42 percentage points. The senator could face blowback for voting against a measure Trump championed — and that was supported by the Republicans in his state. If voters in the working class-dominated state come to embrace the tax bill, Manchin’s re-election challenges could intensify. And it’s not just him. Democratic senators from Republican-leaning states facing similar potential hurdles over their opposition include Claire McCaskill of Missouri; Heidi Heitkamp of North Dakota; and Joe Donnelly of Indiana.

Manchin said that he opposed the bill because it adds to the national debt, and because the individual rate cuts weren't permanent. These are contradictory reasons. And if he was so concerned about the "temporary" tax cuts (as it stands families will receive relief every year for almost a decade), why wouldn't Manchin have voted for the bill, adamantly insisting that he'll vote to extend the tax cuts, or make them permanent, at the earliest possible opportunity? He also blamed his vote on the legislation's repeal of Obamacare's individual mandate tax, marking the latest instance in which he's defended the failing healthcare law, despite assuring West Virginia voters that he's opposed to 'the bad parts' of it.  Other faux moderates like Indiana's Joe Donnelly, and North Dakota's Heidi Heitkamp (who was forced to retract some of the false propaganda she spread about the bill) should be held to account, as well.  And while we're on the subject of vulnerable Senate Democrats, what to make of this news?

Hillary's favorable rating is at an all-time low -- even lower than Trump's -- yet she's reportedly thinking about stumping for Democrats across the country next year.  Will Missouri's Claire McCaskill, who was the very first member of Congress to endorse Hillary Clinton for president last cycle (in 2013!), welcome her old friend and ally back to the Show Me State for some campaign "help"?  Mrs. Clinton managed to attract 38 percent of the Missouri vote last November.  I'll leave you with this observation:

WaPo: "It’s remarkable that not a single Democrat in either chamber voted for this...the undeniable math is that most people are going to pay less...the sky will not fall." #taxreform https://t.co/KqNImowerf