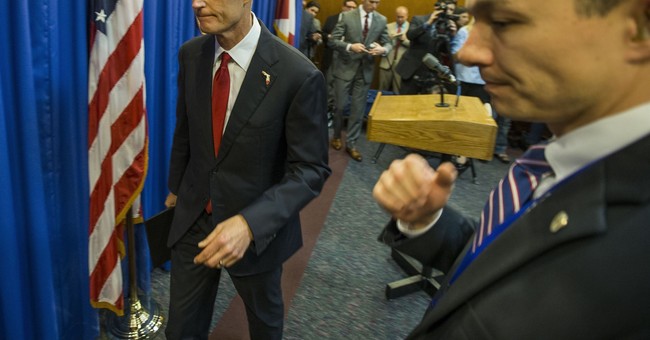 Again, there are some very good things about Florida’s new gun law that Gov. Rick Scott just signed into law. The anonymous tip line, more programs for mental health, and a guardians program, permitting school employees to carry concealed firearms on campus pending approval by the local school districts—all of this is fine. But the provision to raise the age limit of the purchasing of long guns and the implementation of waiting periods only chips away at Second Amendment rights for Floridians. It does not curb gun violence. It will not prevent another mass shooting at a school. All this did was prevent adults, who can vote and serve in the military, the ability to exercise their constitutional rights (via Associated Press):

The bill isn’t what many of the shooting’s survivors, or the school’s students, wanted — they said it doesn’t go far enough. It also marks Scott’s break with the National Rifle Association, and the group’s powerful lobbyist called the bill “a display of bullying and coercion” that would violate Second Amendment rights and punish law-abiding citizens.

It raises the minimum age to buy rifles from 18 to 21 and creates a waiting period on sales of the weapons. It also creates a so-called “guardian” program that enables teachers and other school employees in participating districts to carry handguns if they complete law enforcement training.

Scott said he is still “not persuaded” about the guardian program.

“I’m glad however, the plan in this bill is not mandatory,” he said, adding that the program will be up to local officials to implement. “If counties don’t want to do this, they can simply say no.”

Scott told the students: “You helped change our state. You made a difference. You should be proud.”

The measure would raise the minimum age to buy rifles from 18 to 21, extend a three-day waiting period for handgun purchases to include long guns and ban bump stocks that allow guns to mimic fully automatic fire.

It’s these sorts of provisions that do highlight the rural-urban divide on Second Amendment rights and partially why there can be no debate on gun issues. The people who buy rifles and shotguns at age 18 mostly live in rural areas. Sen. Pat Toomey (R-PA) voiced his opposition to such a proposal while speaking with President Trump, who wants to increase the age to buy all firearms to 21. States like Pennsylvania have millions of 18, 19, and 20-year olds that own such firearms for hunting, self-defense, and target practice. They don’t commit crimes and these people will just see this as another swipe at their cultural roots from the urban-based, coastal elites that dominate the Democratic Party. Now, I’m not saying Scott is a total liberal. He’s under immense pressure at home to pass something and he’s probably thinking about his future political prospects, like the 2018 race for Senate. He probably views this as a compromise, but how this will resonate with GOP voters in his state remains to be seen. It wouldn't shock me if a lawsuit is filed over the age limit provision, which is arguably an unconstitutional infringement on Second Amendment rights.