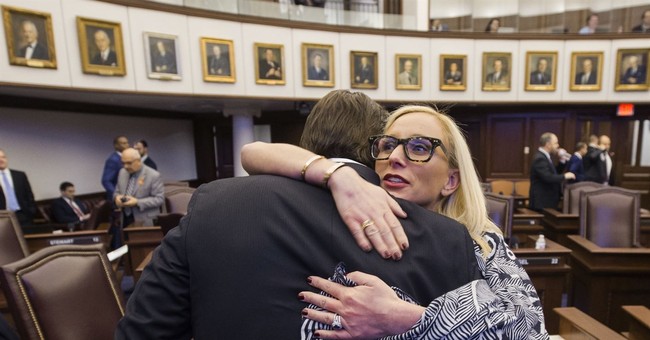 In the wake of the tragic shooting at Marjory Stoneman Douglas High School in Parkland, Florida, where 17 people were shot and killed by Nikolas Cruz, there was a renewed call for legislative action on firearms. In Tallahassee, the state legislature just passed a bill that is now heading for Gov. Rick Scott’s desk for signature. Is it what Democrats wanted? Probably not, but they’re working within the confines of a Republican-dominated legislature.

The bill authorizes a program, which pending school district approval, will permit school employees and teachers to carry concealed firearms on campus providing applicants get training from law enforcement. The age to purchase long guns has been raised to 21 from 18, institutes a waiting period, bans bump stocks, provides more mental health programs for schools, and establishes an anonymous tip line to report possible threats (via Associated Press):

The vote of 67-50 reflected a mix of Republicans and Democrats in support and opposition. The measure, a response to the shootings at a Parkland high school that left 17 dead, is supported by the victims’ families.

Democratic Rep. Kristin Jacobs said she did not like the idea of arming teachers, but she voted yes. Republican Rep. Jay Fant said raising the minimum age to buy a rifle from 18 to 21 was unconstitutional, and he voted no.

“There is a cultural divide in this room, in this state and across the country. And there’s a bill before us that is not perfect,” said Democratic Rep. Kristin Jacobs, whose district includes Marjory Stoneman Douglas High School.

The bill would raise the minimum age to buy rifles from 18 to 21 and create a waiting period on sales of the weapons. It would also create a so-called guardian program that would let school employees and many teachers carry handguns if they go through law enforcement training and if the school district decides to participate in the program.

Other provisions would create new mental health programs for schools; establish an anonymous tip line where students and others could report threats to schools, ban bump stocks and improve communication between schools, law enforcement and state agencies.

Arming teachers is not something new; it’s already established policy in various school districts. I would rather have armed military veterans providing the security, but this initiative, plus the mental health programs and the tip line are things that Second Amendment supporters can get behind. Banning bump stocks I think is a total waste of time since it’s more of a novelty item, green lit under the Obama administration, but I can swallow that pill. What I cannot abide by is the waiting periods and increasing the age to buy long guns. Waiting periods don’t curb gun violence, they only prevents a law-abiding citizen from obtaining a firearm. It chips away at gun rights. What if someone needed that firearm immediately? If anything what this tragedy showed is that you cannot rely entirely on the police to protect you. At the federal and local level, they dropped the ball in stopping this kid. The FBI got a tip on January 5 and didn’t even forward it to their Miami office. FBI Director Chris Wray had to admit that protocol were not followed on this inquiry and apologized.

This isn’t Minority Report. The police are not going to show up before the crime is committed.

What if a 19-year-old or 20-year-old single mother is faced with a home invasion attempt? It’s happened. In 2012, Sarah McKinley made national headlines when she killed a would-be intruder breaking into her home. Her husband had died on Christmas Day 2011 from cancer. She was alone when the attack began. She was, however, armed with a shotgun. The incident occurred on New Years Eve. McKinley was 18-years-old (via ABC News):

In New Year's Eve Martin returned with another man, Dustin Stewart, and this time was armed with a 12-inch hunting knife. The two soon began trying to break into McKinley's home.

As one of the men was going from door to door outside her home trying to gain entry, McKinley called 911 and grabbed her 12-gauge shotgun.

McKinley told ABC News Oklahoma City affiliate KOCO that she quickly got her 12 gauge, went into her bedroom and got a pistol, put the bottle in the baby's mouth and called 911.

"I've got two guns in my hand -- is it okay to shoot him if he comes in this door?" the young mother asked the 911 dispatcher. "I'm here by myself with my infant baby, can I please get a dispatcher out here immediately?"

The 911 dispatcher confirmed with McKinley that the doors to her home were locked as she asked again if it was okay to shoot the intruder if he were to come through her door.

"I can't tell you that you can do that but you do what you have to do to protect your baby," the dispatcher told her. McKinley was on the phone with 911 for a total of 21 minutes.

It’s these people who will be left defenseless. On top of the basic principle of Second Amendment rights, being a former resident of Pennsylvania, there are scores of kids 18 years and older who own shotguns and rifles for target practice and hunting who don’t commit crimes. Outside of the liberal bastions of America, this raising of the long gun purchasing age will be viewed as one thing: urban America messing with the cultural roots of those whom coastal elites view as less than. Just a bunch of dumb country bumpkins who are too stupid to be educated like the rest of us who dwell in urban areas. The rural-urban divide is evident in this proposal. The people are most likely to start owning firearms at this age are from rural, hunting states. Be on the lookout if this proposal starts to leech outside the borders of Florida.

There are some good portions in this bill, but the age limit and instituting waiting periods could yield results that are both unintentionally detrimental and even deadly in some situations. Gov. Scott has not said definitively whether he will sign this legislation.