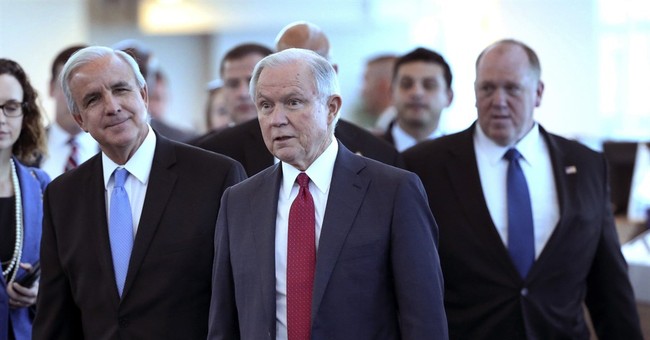 The election of Donald J. Trump meant a new sheriff was in town on immigration. It was seen with Attorney General Jeff Sessions’ decision to withhold grant money from cities that have adopted sanctuary city status for illegal aliens. A legal fight was inevitable. In Texas, a federal judge blocked Republican Gov. Greg Abbott from cracking down on such cities. In Chicago, Mayor Rahm Emanuel said he would sue the Department of Justice. Now, a federal judge has granted the city’s request for a nationwide injunction (via Associated Press):

A federal judge has ruled Attorney General Jeff Sessions cannot follow through with his threat to withhold public safety grant money to Chicago and other so-called sanctuary cities for refusing his order to impose tough immigration policies.

U.S. District Judge Harry Leinenweber on Friday granted Chicago’s request for a temporary “nationwide” injunction. That means the Justice Department can’t deny requests for the grant money until Chicago’s lawsuit against the agency is concluded. He wrote that Chicago has shown a “likelihood of success” in its arguments that Sessions overstepped his authority with the requirements.

Sanctuary city ordinances, which are reportedly meant to offer illegals protection from deportation if they report crimes, became a focal point when Kate Steinle was killed by an illegal alien, who had been deported multiple times, in San Francisco. More family members of those who have had loved ones lost to illegal alien homicides also came forward to denounce the policy. Even America’s sheriffs noted that illegals don’t report crimes.