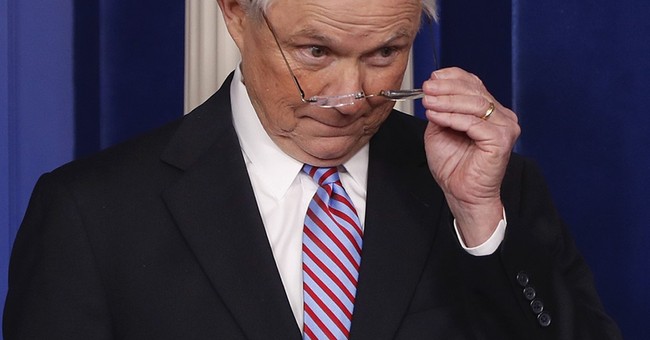 Attorney General Jeff Sessions issued a threat to cities and counties that they could lose access to DOJ grants if they don’t comply with federal immigration laws, namely honoring detainer requests by Immigration and Customs Enforcement for illegal aliens. In short, detainers are when a local law enforcement authority holds an illegal alien in custody until federal agents can pick him up to process him or her for deportation. Here’s the target list if you’re interested—most of those cities and counties causing trouble are in blue states or in heavily Democratic counties. Well, the mayors of these sanctuary cities have a message to the Trump White House and Sessions regarding the threat of yanking funds: screw you; we’ll see you in court (via Fox News):

“If they actually act to take away our money, we’ll see them in court,” vowed New York City Mayor Bill de Blasio.

“We will fight to protect the safety and dignity of all Angelenos,” Garcetti said. “We will work closely with our representatives in Congress to make sure that Los Angeles does not go without federal resources that help protect millions of people every day.”

Chicago Mayor Rahm Emanuel, former chief of staff to President Obama during his first term, has been consistently outspoken on this issue, said that Chicago will continue to welcome immigrants in the face of changes directed by the administration, also calling the denial of federal funds “unconstitutional.”

And Boston Mayor Marty Walsh called the threat ‘destructive’ and ‘irresponsible’. Walsh has said that he would shelter immigrants in City Hall if needed, with the support of Boston Police Commissioner William Evans who said officers would not arrest immigrants living in the U.S. illegally unless they are accused of committing violent crimes.

The Department of Justice plans to set aside $4 billion in grants for cities that comply with immigration laws (i.e. non-sanctuary cities). Liberals argue that these laws allow illegal aliens to report crimes without fear of deportation. The problem is that sheriffs from across the country say that doesn’t happen.