NBC News: Democrats Could Win 50 House Seats In 2018, But It'll Be Because Of These Voters 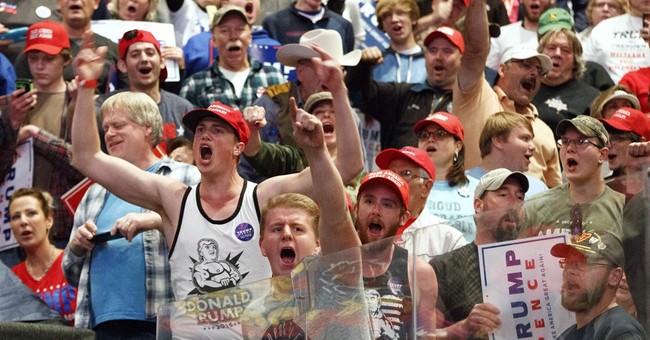 Fifty seats? Democrats can possibly win 50 seats in the 2018 midterms; is that pie-in-the sky or a possible reality? Frankly, it doesn’t matter if they cannot win white working class and rural voters, which is exactly what many have been saying for months, but has failed to permeate the walls of the Democratic National Committee. For starters, I’m not complaining about that; the Democrats are divided, leaderless, and having serious fundraising problems. On top of this situation, which is nothing short of disastrous, the party has to decide whether to double down on its urban base or reach out to the millions of Obama voters who defected for Trump. Rep. Nancy Pelosi (D-CA) and Sen. Chuck Schumer (D-NY), who represent the bicoastal and urban-based liberal elite, helm the leadership that shuns these voters. The party apparatuses in rural America for the Left have all but collapsed, adding yet another block to the rebuilding project. It’s a big climb. Yet, there are some Democrats, like Iowa, who are trying to figure out what went wrong, especially in counties that voted heavily for Obama, but defected in equal measure to the GOP. NBC News’ Alex Seitz-Wald, who reported on the horrific state the Democratic Party is in at the state-level, wrote with Benjy Sarlin how the Democratic Party could ride a massive wave in 2018, but it requires reaching out to the very people, whom they view as racist, backwards, and not in keeping with the values of the party:

If Democrats are planning to ride an anti-Trump wave to a takeover of the House in 2018, they can’t just rely on seats where voters resisted Donald Trump in 2016. They also face the major task of winning back those rural and blue-collar whites who defected to the president.

That path runs through places like Dubuque County, Iowa, where a 28-year-old Democratic state representative, Abby Finkenauer, is running for Congress against a GOP incumbent, Rep. Rod Blum.

In 2010, a Republican won a county supervisor position for the first time in more than five decades. In 2014, Blum, a businessman, captured an open seat in Congress in another upset, while aligning himself with the Tea Party.

…On Nov. 8, 2016, the shift became impossible to ignore. For the first time since President Dwight D. Eisenhower, the Republican presidential ticket had come out on top in the county as part of a statewide 16-point swing from 2012.

Democrats are most bullish on winning Trump-phobic professionals in rapidly diversifying suburbs like Orange County, California, a cradle of conservatism that went blue for the first time last year.

But they’d still be unlikely to flip the 24 needed to regain the House unless they can take back places like Dubuque and the surrounding district.

"It’s going to be seats like (Iowa’s 1st district) that are very important to winning a House majority,” said Kyle Kondik, managing editor of the politics forecaster Crystal Ball.

If there is a Democratic wave on Nov. 6, 2018, it might start in Maine’s 2nd district, the country’s northern and easternmost congressional seat, whose rural white voters broke with decades of Democratic loyalty in favor of Trump. It would continue with Democrats holding their own in New Hampshire and Connecticut, as they picked up a few seats in upstate New York and New Jersey and outperformed Clinton in central Pennsylvania and the political battlegrounds around Philadelphia.

Moving South and West, a roar would erupt among Democrats if Virginia’s 10th swung their way, which would bode well for affluent suburbs everywhere. And if they really have repaired their image with working-class whites, the wave might roll through Ohio’s Canton-based 7th district on its way to Southern Illinois’ 12th and Iowa’s 1st and 3rd before hooking into multiple districts in Michigan and Minnesota.

Ironically, the white working class was a key plank of the Obama coalition and the Democratic Party overall in years past. In 2016, out of the 490 counties that dot the Appalachia region of America, Hillary Clinton only won 21 of them, mostly in counties that housed colleges, which boosted the amount of Democratic votes in these areas. In all, the largest 100 cities in the country only house 15 percent of the population. You cannot win elections that way, nor can you expand politically on the local level, which is key to redistricting. Whoever controls the state legislature, controls the congressional maps. Period.

NBC News, like other outlets, have also noted how limited the Democrats are concerning possible pickups without rebuilding outreach to these rural voters. For starters, there are not enough suburban districts to get this done. Second, and probably the most damning, is that even if the Democrats are able to turnout every 2016 Clinton voter who voted for the GOP representative for Congress and were able to flip them, it wouldn’t be enough to win the House. That’s not a conservative survey; that’s a left-leaning think tank, Third Way, saying it. Right now, as Guy noted, white working class voters are very sour on the Democratic Party, who they think views them with contempt. They’re not wrong.

Also, the wounds from the 2016 campaign could also complicate matters. The Bernie Sanders and Obama/Clinton wings of the party are on the verge of all-out civil war. That’s explicit in California. In the meantime, the progressive wing’s push to alter the direction of the Democratic Party has the more establishment wing trying to prevent a Leninist takeover. Right now, there’s a rift between those who know that the die-hard liberal message might have to be tuned and tweaked a bit to win over rural voters, which means moderate on gun control, not drooling with delight over abortion, and pragmatic on health care. The Left wants to have litmus tests on the latter two. Also, there’s the Clinton factor; voters, Democratic and especially Republican, do not like that woman. Sarlin ran into Gail Stoffell, 60, in Dubuque, Iowa who described herself as a staunch Democrat, voted for Al Gore and John Edwards, but despised Clinton—and she thinks she’s trashed the party brand. Asked if she would identify as a Democrat, Stoffell said no, “Hillary did too much damage.”

So, can Democrats win 50 seats? Maybe, but it looks like they have a lot of work ahead of them—and no side within their camp seems willing to budge. Blood sports will probably continue.