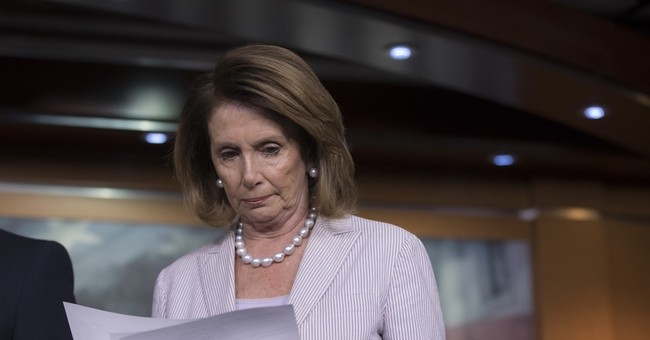 First off, let's not pretend that things are going swimmingly for the Trump administration and Republicans.  The RealClearPolitics average of national polling shows the president's approval rating slumping below 40 percent, including weak number from typically-Trump-friendly Rasmussen.  The cartoonish dysfunction in the White House, compounded by the perception that Trump's agenda has stalled, certainly aren't helping matters either.  Warning sirens are sounding all over the place for the GOP; there's no getting around that.  Then again, voters often think even less of the Democrats -- viewing them as leaderless, agenda-less, and too wedded to government "solutions."  In their preliminary efforts to win back Congress next year, Democrats have introduced a terrible new slogan, and have commissioned polling to help determine how to splinter off more votes from a demographic that pushed Trump to victory: Working class whites.  Their own survey paints a bleak picture on that front.  Here's a big one:

Even after six months of shambolic Republican governance, Democrats are still viewed as an unacceptable alternative to many persuadable voters in middle America. Those were the sobering findings of a Democratic survey commissioned by the party-backed House Majority PAC, which Politico and McClatchy first reported. The poll surveyed working-class white voters in pivotal districts that Democrats are targeting in the midterms. Despite the Trump turmoil in Washington, Republicans held a 10-point lead on the generic ballot (43-33 percent) among these blue-collar voters. Democrats hold a whopping 61 percent disapproval rating among these voters, with only 32 percent approving. Even Trump’s job-approval rating is a respectable 52 percent with the demographic in these swing districts.

Interestingly, Republicans' Congressional ballot advantage over Democrats (though they trail nationally) is stronger (+13) among 18-59 year-olds within this racial-socioeconomic demographic than it is with those who are 60-plus (+8). The same goes for Trump's job approval. Within the younger cohort, he's riding high at (56/40), while barely above water with older working class whites (49/47). Again, these are findings from a Democratic poll.  Two-thirds of this electorate approves of Republicans in Congress, and their top stated objections to Democrats are (a) not working with the GOP, and (b) obstructing Trump. The "resistance" is turning them off. Kraushaar explains another source of Democrats' struggles, stretching beyond just white voters without a college education:

The more uncomfortable reality is that these blue-collar voters’ resistance to the Democrats is on cultural grounds, not economic ones—a finding that studies of Obama-Trump voters have repeatedly shown. Democrats are facing a double-whammy: They’re still experiencing resistance among moderate voters in suburban swing districts over tax-and-spend economic policies. Meanwhile, small-town voters are having a tough time voting for their candidates because of a growing cultural disconnect. In the short term, the House will give Democrats their best opportunity to prove they can make inroads despite the political hurdles. To win back control in the lower chamber, they will need to win Republican-held seats both in the suburbs and in small-town America. It’s not an either-or proposition. But if they fall short despite such a promising political environment, the longer-term ramifications for the party’s ability to regain congressional power are discouraging.

His either/or point is important. Democrats are more likely to ride anti-Trump sentiment to victories in the 'burbs, even if many of those voters are suspicious of their propensity to raise taxes and run up federal spending. But if they're still sucking wind in rural and white working class districts, Republicans have a chance to save their House majority even if suburban voters swing pretty heavily toward Team Blue.  It's about economics and culture.  The full poll is HERE.  I'll leave you with this reminder of a core component of the GOP's swing district strategy:

Share this on Facebook
Tweet
Fauci on Attacks Against Him From Sens. Paul, Cruz: 'They're Really Criticizing Science'
Landon Mion
Buttigieg on Criticism Over Comments About Racist Roads: ‘the Point Is Not to Make America Feel Guilty’
Landon Mion
Fauci Says 'We're Going to Have to Start Living with COVID' Because It Won't Be Eradicated
Landon Mion
Fauci Fear Mongers on XI Variant and Warns Lockdowns Could Be Coming
Katie Pavlich
Joe Biden Caught Maskless Indoors, Yet Again
Rebecca Downs
South African Doctor Who Raised Alarm About Omicron Variant: 'Symptoms Were So Different And So Mild'
Rebecca Downs
CARTOONS | Bob Gorrell
View Cartoon
Most Popular