Vanity Fair: There's Really Nothing To These Meetings Sessions Had With Russian Ambassador 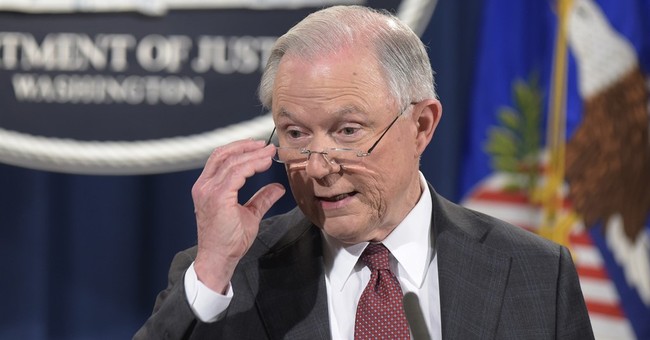 Of all places, I’d never thought I’d read a political article from Vanity Fair that I would agree with—but T.A. Frank has a good piece in the popular culture publication about Attorney General Jeff Sessions’ undisclosed meetings with Russian Ambassador Sergey Kislyak. There’s no liberal rancor. There are no Manchurian Candidate innuendos, it’s simply looking at the transcripts and questions from Sens. Pat Leahy (D-VT) and Al Franken (D-MN) and saying that there’s no evidence of wrongdoing, nor is there any evidence that Sessions perjured himself in his answer to Franken:

Then I reviewed the tape. And now I dismiss all three.

Who asked what, and how did they ask it? I looked up the QFR that Sessions submitted. Here was the Russia question as posed by Vermont Democrat Patrick Leahy: “Several of the President-Elect’s nominees or senior advisers have Russian ties. Have you been in contact with anyone connected to any part of the Russian government about the 2016 election, either before or after election day?” Here was Sessions’ answer: “No.”

Untrue? The question was not whether Sessions had been in contact with anyone in the Russian government, but rather whether Sessions had been contact with anyone in the Russian government about the 2016 election. Assuming that Sessions never discussed the election with Kislyak—and no one has been able to offer any evidence that he did—then there was nothing false in his response. There wasn’t even anything misleading. Zero story.

The second alleged offense is that Sessions lied to Franken. Franken’s question was this: “If there is any evidence that anyone affiliated with the Trump campaign communicated with the Russian government in the course of this campaign, what will you do?” Since Sessions himself had spoken to the Russian ambassador, making the claim that “I did not have communications with the Russians” could look like perjury or at best misdirection.

Now, unless you’ve gone into full “time for some game theory” mode, you would be hard-pressed to miss that that “communications with the Russians” is shorthand for “communications of the sort that CNN is alleging,” not “any sort of communication with any Russian official ever.”

It’s funny how in the 2012 election, Mitt Romney and Republicans were mocked for saying that Russia was our biggest geopolitical foe. I remember the “the 1980s called, they want their foreign policy back” cracks by the insufferable Left. Two years later, Russia annexed Crimea—and we did nothing. The Obama administration didn’t even call it what it was—an invasion—it was an uncontested arrival, whatever that means. They then pushed this odd narrative that Russia invaded out of weakness. Now, since Hillary Clinton lost the election, Russia is public enemy number one. The swing on the Left about Russia is shown in the polling. Not since 1983 have there been this many Americans saying that Russia is a serious threat, thanks to Democrats’ “neo-McCarthyite furor.”

Now, there’s this endless stream of stories showing how Trump aides met with Russian officials during he campaign. Yeah—that’s their job, especially when it became clear that Trump was going to be the GOP nominee and potentially the next president of the Untied States at the time. There is nothing illegal about these meetings. There was nothing unusual about Sessions’ meetings with the Russian ambassador, one of which was an Obama White House-sponsored event during the Republican National Convention in July. Kislyak also attended a Heritage Foundation panel on European relations, which Sessions also attended, during the convention. The other time was a September 8th meeting in Sessions office. Is this evidence of collusion? Nope. I think people have forgotten that Sessions was a member of the Senate Armed Services Committee and that he—and other members of Congress—often meets with foreign officials.

The Associated Press’ Julie Pace also noted that all of the meetings being cited by liberals as possible sources of subversion were not illegal. In fact, there’s pretty much nothing wrong with any of the meetings Trump aides had with the Russians, including former National Security Adviser Michael Flynn. It’s not a scandal to meet with the Russians. Still, that hasn’t stopped scores of Democrats from calling for Sessions’ head in this matter. Sessions recently said that his answers to Leahy and Franken were truthful, and that he did not misled the committee.