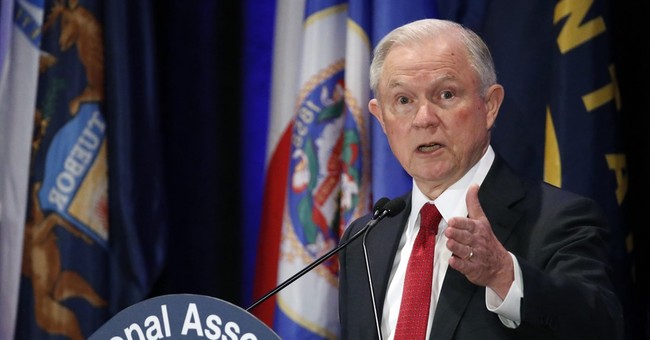 Top Democrats, Reps. Nancy Pelosi (D-CA) and Elijah Cummings (D-MD), called on Attorney General Jeff Sessions to resign over undisclosed contacts with Russian Ambassador Sergey Kislyak. Sessions had two rendezvous with the Russian diplomat, one of which occurred in September of last year when the interference campaign conducted by the Kremlin was reportedly in full swing, according to The Washington Post. The other time was in July. During his confirmation hearing in January, Sessions admitted that he's been called a surrogate for the campaign a few times, but did not have communications with the Russians. It was in response to Sen. Al Franken's (D-MN) question about what he would do as AG if evidence of Trump campaign surrogates having contact with the Russian was discovered. Sessions was also asked by Sen. Pat Leahy (D-VT) in a letter if he had any contact with the Russians about the 2016 presidential race either before or after Election Day. Sessions answered no.

The Post noted that Sessions was a member of the Armed Services Committee, so speaking with ambassadors isn’t necessarily unorthodox, but hiding the meeting might be viewed as a bit “weird,” using the words of former U.S. Ambassador to Russia Michael McFaul. Sen. Al Franken (D-MN)  told the Post that Sessions should recuse himself over what could be misleading statements, though stopped short of calling for his resignation:

One of the meetings was a private conversation between Sessions and Russian Ambassador Sergey Kislyak that took place in September in the senator’s office, at the height of what U.S. intelligence officials say was a Russian cyber campaign to upend the U.S. presidential race.

The previously undisclosed discussions could fuel new congressional calls for the appointment of a special counsel to investigate Russia’s alleged role in the 2016 presidential election. As attorney general, Sessions oversees the Justice Department and the FBI, which have been leading investigations into Russian meddling and any links to Trump’s associates. He has so far resisted calls to recuse himself.

At his Jan. 10 Judiciary Committee confirmation hearing, Sessions was asked by Sen. Al Franken (D-Minn.) what he would do if he learned of any evidence that anyone affiliated with the Trump campaign communicated with the Russian government in the course of the 2016 campaign.

“I’m not aware of any of those activities,” he responded. He added: “I have been called a surrogate at a time or two in that campaign and I did not have communications with the Russians.”

“There was absolutely nothing misleading about his answer,” said Sarah Isgur Flores, Sessions’s spokeswoman.

“He was asked during the hearing about communications between Russia and the Trump campaign — not about meetings he took as a senator and a member of the Armed Services Committee,” Flores said.

She added that Sessions last year had more than 25 conversations with foreign ambassadors as a senior member of the Armed Services Committee, including the British, Korean, Japanese, Polish, Indian, Chinese, Canadian, Australian and German ambassadors, in addition to Kislyak.

In the case of the September meeting, one department official who came to the defense of the attorney general said, “There’s just not strong recollection of what was said.”

The Post added that they asked the 26 members of the Armed Services Committee to seek whether any of them, besides Sessions, had contact with the Russian ambassador in 2016. Out of the 20 who responded, including Sen. John McCain (R-AZ), none of them met with the Russians. That still leaves six who haven’t responded yet. The publication also added that Sessions’ July meeting was at a Heritage Foundation event in Cleveland, where 50 other ambassadors, including Kislyak, attended. The Alabama senator spoke with some of the diplomats one-on-one. Kislyak was one of them.

.@LindseyGrahamSC on special prosecutor: "It is clear to me that Jeff Sessions my dear friend cannot make this decision about Trump." @cnn

This meeting certainly doesn’t seem to fall within the realm of the unordinary. And Guy noted that the statement from Flores that sort of cuts through the palace intrigue might be enough for him to avoid perjury charges. The Wall Street Journal added that the FBI has examined the contacts, but people close to the investigation said the conclusions are unknown. Sen. Lindsey Graham (R-SC) also seem to be edging toward the need for a special prosecutor as well:

The outcome of the inquiry, and whether it is ongoing, wasn’t clear, these people said. The contacts were being examined as part of a wide-ranging U.S. counterintelligence investigation into possible communications between members of Mr. Trump’s campaign team and Russian operatives, they said.

The Federal Bureau of Investigation, which has been leading the investigation, didn’t immediately respond to a request for comment. The White House directed requests for comment to the Justice Department.

“If there is something there and it goes up the chain of investigation, it is clear to me that Jeff Sessions, who is my dear friend, can not make this decision about Trump,” said Sen. Lindsey Graham (R., S.C.), adding that a special prosecutor might be needed.

The law has changed since wide-ranging probes into the Clinton Administration, when a three-judge panel could appoint an “independent counsel” or a “special prosecutor.” Today, the attorney general retains far more control over the scope of a special investigation and its prosecutorial jurisdiction.

Mr. Sessions can also appoint a temporary “special counsel” from outside the Department of Justice to conduct an investigation into a particularly sensitive matter and possibly prosecute related wrongdoing.

Some are noting that it’s a) nuts to suggest that a meeting in Sessions’ office and a rendezvous at a Heritage event are evidence of subversion of behalf of the senator; and b) he answered Franken and Sen. Pat Leahy’s (D-VT) questions about Russian contact truthfully. Leahy asked about contact with Russians concerning the 2016 election, whereas Franken’s question related to campaign surrogates. As we let this settle, Sen. Elizabeth Warren (D-MA) has called on Sessions to resign.

I didn't like Flynn - a hothead with red flags. I disagree with Sessions on a ton of issues. But this is straight up nuts.

When I worked for John Cornyn, ambassadors visited and called constantly. He was a junior Senator then. Sessions was high ranking on SASC.

“I have no idea what this allegation is about. It is false,” said Sessions.