AG Sessions: I Did Not Mislead Congress In My Confirmation Testimony 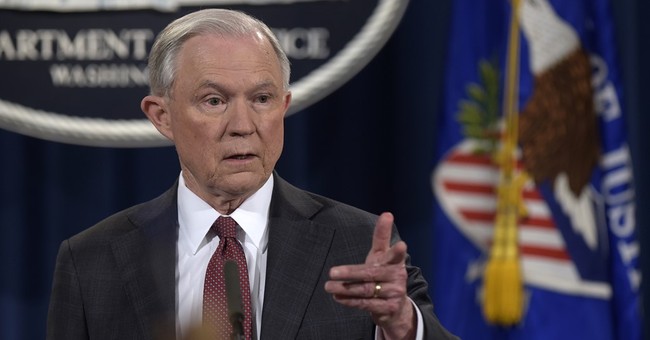 Attorney General Jeff Sessions landed himself in hot water over two undisclosed meetings with Russian Ambassador Sergey Kislyak. Democrats are trying to claim that Sessions was not truthful with the Senate Judiciary Committee in his testimony at best and committed perjury at worst. They’re certainly trying to fan the flames of the latter. Scores of Democrats have called on him tor resign, but the Left’s Russophobic tendencies are on full display, attacking any time Trump aides have met with the Russians. None of these meeting are illegal. In fact, the rendezvous Kislyak had with Sessions at the Republican National Convention in July was an Obama White House sponsored event. The other times Sessions met with Kislyak were within the capacity as a member of the Senate Armed Services Committee. Meeting with foreign officials is not unusual with members of Congress on the Hill. These revelations forced him to recuse himself from any investigation elating to the Trump campaign and the 2016 election, but Senate Democrats on the Judiciary Committee want him to return to Capitol Hill for more testimony. Sessions said that he would write a letter clarifying this portion of his testimony, but has stated that his answers to Sens. Pat Leahy (D-VT) and Al Franken (D-MN) were correct. He submitted that letter today (via CNN):

Attorney General Jeff Sessions defended his answers about Russian contacts to the Senate Judiciary Committee as "correct" in a letter Monday, as he sought to tamp down questions after it came to light that he had met with the Russian ambassador twice last year.

Sessions defended his response to Minnesota Democratic Sen. Al Franken at his confirmation hearing in a letter the Department of Justice released Monday, saying his answer was "correct," and he "did not mention communications (he) had had with the Russian ambassador over the years because the question did not ask about them."

The attorney general had been under fire since late last week, when it was reported that he met with Russian Ambassador Sergey Kislyak twice during the course of the election, during which he was a surrogate for President Donald Trump. But Sessions maintained that his meetings with Kislyak were in his capacity as a senator, not related to the campaign.

Sessions said in the letter that he "spoke briefly" to Kislyak on the sidelines of the Republican National Convention in Cleveland in July and also met with Kislyak in his office in September, a meeting that was attended by his Senate staff, he said.

Sessions said he does not recall talking about the campaign.

"I do not recall any discussions with the Russian ambassador, or any other representative of the Russian government, regarding the political campaign on these occasions or any other occasion," he wrote in the letter.

Democrats, still bitter over their 2016 loss, want Sessions gone, but there’s no evidence of collusion with these two meetings with Kislyak. They’re desperately trying to find ways to legitimize the talking point that’s been marinating for weeks, which is that the Trump campaign and Russian intelligence worked together to fix the election. Throughout the course of these anti-Russian antics by Democrats, they’ve embarrassed themselves, notably Sen. Claire McCaskill (D-MO)—who said she never met with the Russian ambassador; she did. Here’s what Franken and Leahy asked Sessions (via WaPo):

FRANKEN: CNN just published a story alleging that the intelligence community provided documents to the president-elect last week, that included information that “Russian operatives claim to have compromising personal and financial information about Mr. Trump.” These documents also allegedly say “there was a continuing exchange of information during the campaign between Trump surrogates and intermediaries for the Russian government.” Again, I’m telling you this as it’s coming out, so, you know.

But if it’s true, it’s obviously extremely serious, and if there is any evidence that anyone affiliated with the Trump campaign communicated with the Russian government in the course of this campaign, what will you do?

[LEAHY:] Several of the President-Elect’s nominees or senior advisers have Russian ties. Have you been in contact with anyone connected to any part of the Russian government about the 2016 election, either before or after Election Day?

Why couldn’t he say he was meeting with Kislyak as a member of the U.S. Senate? It’s because Democrats