Democratic 2016 Autopsy: The Party Is Dead Without Gains At State Level 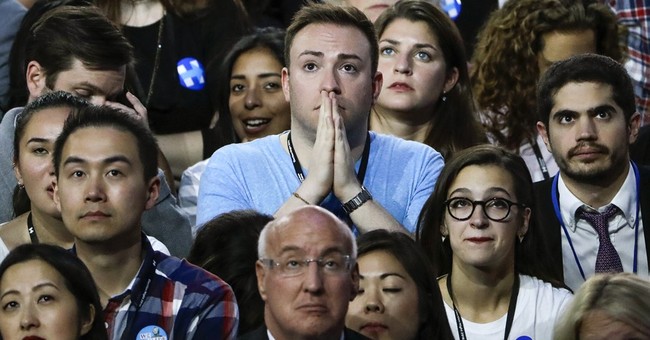 We’ve written about the Democratic Party’s woes extensively, especially at the state and local level where they have been virtually destroyed. The losses are so deep that it might have wiped out a new generation of Democratic talent. Over 1,000 Democratic spots in congressional elections, governorships, and state legislatures have been lost to Republicans over the past eight years. The party has been hallowed out, which was first reported by various outlets, like The Washington Post, after the 2014 elections.

Donald Trump was suppose to sink the party, put the House in play, and erase the gains at the state and local level for the GOP. That never happened. In fact, the GOP is the dominant political force in the country, controlling 69/99 state legislatures, two-thirds of the governorships, the White House, and Congress.

The Democrats' debate over what to do moving forward is also a mess. You have the last remaining rural Democrats pushing for a leadership change, possibly refocusing on reconnecting to white working class voters that voted against Clinton and sunk her presidential hopes. Others, mostly from the insufferable urban bastions of Democratic power (i.e. the cities), want to double down on identity politics and issues that led to Trump’s victory in the first place. What is clear is that if Democrats don’t regain some ground in rural America, the party is pretty much finished, according to former Democratic operative Al Benninghoff and Professor Heather James. As the Left prepares to fight Trump, they notice that most of the groups dedicated to fighting the Trump White House are solely focusing on federal elections only:

One local leader we interviewed noted: “I am kind of frustrated because what they did was they came in and it was all about [the national races]. So we lost some of the lower level elected officials.”

Another lamented, “I disagree fundamentally with the idea that you just focus on a few races. I think I was able to bring more votes to the candidates up the ballot because I was out there talking to the voters [about local issues]. … It’s how you win in the long run.”

Similarly, another commented, “The year that we really got shellacked, the rural Democrats [in the state] had a high percentage of turnout. … I am just saying where there is effort it can happen. In [one county] Democrats turned out in record numbers despite having no help from [the national party].

“That demonstrates the importance of recruiting strong candidates all the way down the ballot.”

New leaders repeating the same strategies that resulted in the lowest representation by Democrats since 1920 are destined to get the same results. Even if these groups pick up a handful of congressional seats in 2018 or 2020, Republicans can simply erase them in 2022’s redistricting processes, unless Democrats can also regain control of key state legislatures.

They noted how after 2008, the GOP launched RedMap, which targeted state and local offices. The Republican State Leadership Committee has rebranded that effort RedMap 2020, a seven-year, $125 million projected aimed at defending gains made over the past eight years. So far, they’re not only defending those seats, but also gaining more ground. Democrats are in for a world of hurt, though the pain can be blunted if they reach out to white working class voters. The road out of this wilderness isn’t necessarily a tough one with a combination of good messaging and solid candidates. The GOP should take notice of this as well. These Trump voters may have voted Republican, but they’re not reliable. If Trump can’t deliver on key promises (trade, taxes, border security, immigration, job creation), don't be shocked if they vote against him. Still, reaching out to white voters may not be so popular with the social justice warrior, snowflake majority that has taken over the Democratic Party.