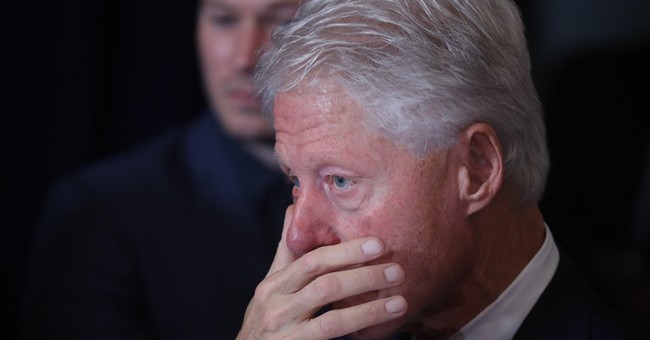 In February of 2016, The New York Times reported that everyone in Clinton land thought they were going to slaughter Donald Trump. It was hubris. It was typical elitism from the liberal elite. And in the end, the Trump campaign smashed the face of the Clinton operation with a brick, doused it in gasoline, and set it on fire. It was an upset that no one, except for white working class America and die-hard Trump supporters, saw coming, which explains the epic temper tantrums emanating from the Left. Old, sick Hillary lost and Donald Trump is now president-elect. But there was one person who potentially saw this coming: Bill Clinton. Bill, a governor from Arkansas who was able to tap into the economic distress of America’s working class and ride that to the presidency, saw that Trump was onto something. At the same time, his strategy to tackle this vulnerability failed miserably (via NYT 2/29/16):

Several Democrats argued that Mrs. Clinton, should she be her party’s nominee, would easily beat Mr. Trump. They were confident that his incendiary remarks about immigrants, women and Muslims would make him unacceptable to many Americans. They had faith that the growing electoral power of black, Hispanic and female voters would deliver a Clinton landslide if he were the Republican nominee.

But others, including former President Bill Clinton, dismissed those conclusions as denial. They said that Mr. Trump clearly had a keen sense of the electorate’s mood and that only a concerted campaign portraying him as dangerous and bigoted would win what both Clintons believe will be a close November election.

That strategy is beginning to take shape, with groups that support Mrs. Clinton preparing to script and test ads that would portray Mr. Trump as a misogynist and an enemy to the working class whose brash temper would put the nation and the world in grave danger. The plan is for those themes to be amplified later by two prominent surrogates: To fight Mr. Trump’s ability to sway the news cycle, Mr. Clinton would not hold back on the stump, and President Obama has told allies he would gleefully portray Mr. Trump as incapable of handling the duties of the Oval Office.

The problem here was Clinton’s email fiasco. You may say Trump is incapable of being president, but you had an unauthorized and unsecure email server that possibly put America’s secrets at risk. How is that presidential? It’s not. It’s possibly illegal. Moreover, the notion that Trump is so thin-skinned to the point where he would launch nuclear missiles is just not believable. It’s cartoonish in the extreme. Most of these attacks, especially the ones involving Trump’s remarks about women, bounced off voters outside urban areas; locker room talk became an acceptable reason. Also, the Clinton Foundation being under FBI investigation, the alleged unethical dealings, and the six-figure paychecks they received for speeches just undercut their whole working class hero line of attack. On that front, it’s hard for anyone to believe that you understand their economic hardship when you make in one 20-minute speech more than what most Americans earn in a lifetime. Yes, Trump is a billionaire, but he’s not shy about it.

There’s the permanent majority hubris at play here too. Clinton, Obama, and the Democrats think they have it made in national elections. The coalition consists of college-educated women, blacks, Hispanics, and the cities, except that we forget that the nonwhite vote only makes up roughly 30 percent of the electorate and these folks live in areas and states that aren’t competitive in national elections. California isn’t turning red and Texas isn’t going blue. Seventy percent of the electorate, on average, is majority white. A marginal swing could have a game changing impact on the election. The Clinton operation didn’t get that, which seems to be the most obvious fact. White votes matter. Black votes matter. Hispanic votes matter. They all matter when it comes to winning elections. It’s this mindset that I feel paints the Democratic Party as un-American. They worry about the groups that can get them a win, but they don’t care, literally, about any other group. So, out comes the big electoral cookie-cutter and the balkanization begins. Given the progressive vein of the party, whites are the problem with the country. All the sexism, racism, and misogyny comes from straight white males, right? Well, 53 percent of white women voted for Trump; 42 percent of all women voters cast their ballot for Trump. I don’t think it’s white people, Democrats. I think you just had a terrible candidate. The New York Times also noted that Clinton actually turned down an invitation to address the St. Patrick’s Day gathering at Notre Dame; something that Obama and Biden had attended in past years. The Clinton team turned it down; white Catholics weren’t a priority. The end result was the realization that perhaps a demographic that makes up 70 percent of the electorate sort of mattered…big league:

Last year, a prominent group of supporters asked Hillary Clinton to address a prestigious St. Patrick’s Day gathering at the University of Notre Dame, an invitation that previous presidential candidates had jumped on.

Barack Obama and Joseph R. Biden Jr. had each addressed the group, and former President Bill Clinton was eager for his wife to attend. But Mrs. Clinton’s campaign refused, explaining to the organizers that white Catholics were not the audience she needed to spend time reaching out to

But as the dust settled, Democrats recognized two central problems of Mrs. Clinton’s flawed candidacy: Her decades in Washington and the paid speeches she delivered to financial institutions left her unable to tap into the anti-establishment and anti-Wall Street rage.

And she ceded the white working-class voters who backed Mr. Clinton in 1992. Though she would never have won this demographic, her husband insisted that her campaign aides do more to try to cut into Mr. Trump’s support with these voters. They declined, reasoning that she was better off targeting college-educated suburban voters by hitting Mr. Trump on his temperament.

Instead, they targeted the emerging electorate of young, Latino and African-American voters who catapulted Mr. Obama to victory twice, expecting, mistakenly, that this coalition would support her in nearly the same numbers. They did not.

Mrs. Clinton had defeated Senator Bernie Sanders of Vermont in the primary race by rallying older African-American voters and Democratic women, but she seemed disconnected from the white working class that delivered Mr. Sanders’s victories in Michigan and Wisconsin. Mr. Trump won Wisconsin on Tuesday and appeared to have narrowly won Michigan, as well.

He won 67 percent of the vote among non-college-educated whites, compared with 28 percent for Mrs. Clinton, according to exit polls.

Early on, Mr. Clinton had pleaded with Robby Mook, Mrs. Clinton’s campaign manager, to do more outreach with working-class white and rural voters. But his advice fell on deaf ears.

The sophisticated data modeling Mr. Mook relied on showed that young, Latino and black voters would turn out as they had hoped. But while they favored Mrs. Clinton overwhelmingly, she could not run up the score with them like Mr. Obama had in 2012.

Clinton isn’t Obama. She’s far from it. Remember, Obama beat her in the 2008 primaries. She doesn’t have a message for hope or change. Heck, her time in Washington already disqualifies her from taking that mantle. And her email issues further disqualified her from higher office. There’s talk that FBI Director James Comey’s letter informing Congress that the bureau would review 650,000 more Clinton-related emails from top Hillary aide Huma Abedin cost her the election. The fact is the momentum towards Trump began prior to Comey’s October 30 letter. Also, it’s still her fault. If she hadn’t set up that unprecedented email system to conduct State Department business, none of this would have happened. The white working class formed the foundation of the Obama coalition and the Clinton campaign missed that fact. They missed the fact that Obama won these people because of the caliber of candidate he was; Clinton can’t come anywhere near him. She sucks. Democrats don’t have to win white working class voters; they just need to be competitive. They were not this cycle. If you have a solid turnout with nonwhites, college-educated women, young people, and get enough working class whites to vote Democratic, you can win an election.

Instead, what we got was the revenge of the white working class, coupled with millions of Obama supporters who flipped for Trump this year. Moreover, 2012 analysts lowballed the actual working class vote total by 10 million. Trump wining a fraction of those voters would be enough to win the election. In the end, the Democrats thought white votes didn’t matter, though they were the glue to the whole 2008, 2012 operation; that they would get the same turnout with their traditional allies to break for Clinton; and probably spent an ungodly amount of money trying to find those voters who might breaking Clinton through big data operations. As two former senior advisers to Bernie Sanders mentioned that maybe organizing thousands of volunteers doing canvassing and going door-to-door would have given you a better gauge of the voter climate and the messaging Clinton used that was falling flat. In fact, Clinton’s turnout operation definitely turned out Trump voters. Amy Chozick, who wrote the article about Clinton’s miscalculations, showed a campaign tortured by her weaknesses. She can’t press the gender card too much on the first female president because it might alienate male voters. She also tried to run on unity, though record numbers of voters thought she was untrustworthy. As Kimberly Strassel wrote in an op-ed in The Wall Street Journal, what we got was a complete and total rejection of the Democratic Party from these very people Fallon, Mook, and others ignored:

One exit poll shows Mrs. Clinton won union households by 2 percentage points, when Mr. Obama carried them by 18. Of the 207 swing counties that went for Mr. Obama only once (in 2008 or 2012), Mr. Trump won 194. This is an utter abandonment of the Democratic Party that Mr. Obama and Mrs. Clinton led.