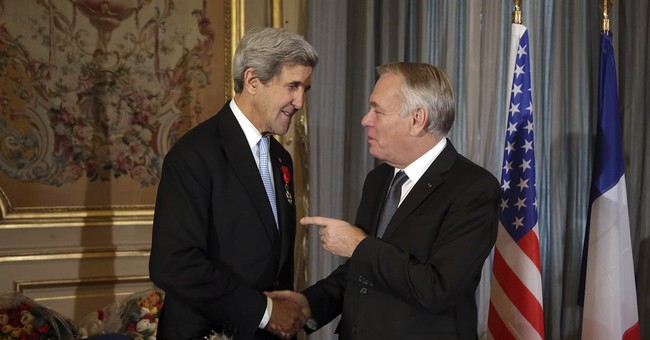 Of course, the U.S. State Department is denying that the documents are authentic, but Israel’s Haaretz newspaper is reporting that Egyptian officials might have leaked new information that seems to corroborate some of the claims made by Israeli Prime Minister Benjamin Netanyahu’s Office regarding the U.S. working on and lobbying for the recent UN resolution that condemned the country's expanded settlements. At the same time, the resolution also included the Western Wall as an occupied territory, which was not vetoed by the U.S., a move that angered the Israeli government and pro-Israel advocates.

Israeli Ambassador Ron Dermer and Netanyahu’s spokesman David Keyes made such allegations this week, with Keyes saying that the information showing the U.S. crafted and pushed this anti-Israel resolution is “ironclad.” At the same time, Haaretz added that the document has yet to be verified:

It is not possible to gauge the authenticity of the report published on the site Al-Youm Al-Sabaa. However, if it is authentic, it reinforces some of the claims that Prime Minister Benjamin Netanyahu’s bureau has voiced against the White House over the past few days.

The five-page Arabic document released by the site appears to be a summary of the meeting, composed by the Palestinian delegation. If the document is authentic, it was probably leaked by officials in the Egyptian government.

According to the document, Kerry and [National Security Adviser Susan] Rice said America’s UN Ambassador Samantha Power was prepared to meet with Palestinian UN Ambassador Riyad Mansour to discuss the matter. Rice and Kerry are said to have asked Erekat and the other members of the delegation to keep the meeting top secret. Kerry and Rice said they wanted to avoid leaks of the meeting to the media because of the sensitivity of the transition to the Trump administration.

According to the leaked document, Rice told the Palestinian delegation that the Trump administration was very dangerous for them because his positions on the Israeli-Palestinian conflict differed from those of all American administrations since 1967. Rice recommended that the Palestinians take seriously what Trump’s advisers were saying about moving the U.S. Embassy to Jerusalem and annexation of parts of the West Bank to Israel.

The document quotes Rice as asking Erekat what the Palestinians would do if Trump moved the embassy to Jerusalem and made it possible for Israel to annex part of the West Bank. It quotes Erekat as replying that the Palestinians would immediately join 16 UN agencies in which they were not yet members, retract the PLO’s recognition of Israel, freeze security cooperation and diplomatic and economic ties with Israel, make Israel responsible for the management of daily life in the PA, and call on all Arab countries to expel U.S. ambassadors.

Over at The Washington Examiner, Joel Gehrke reported that the U.S. was discussing the resolution throughout the fall:

Secretary of State John Kerry advised Egyptian and Palestinian diplomats on how to write a resolution condemning Israeli settlement construction that would avoid an American veto, but he did not "orchestrate" the international rebuke, according to a spokesman.

"Of course, there has been for some time in the fall, talk about this resolution or that resolution with regard to Middle East peace and the Israeli-Palestinian issue," State Department spokesman Mark Toner told reporters. "Of course, in the course of those conversations, we're always making clear what our parameters are, what our beliefs are, what we need to see in order to even consider a resolution. That's part of the give and take of the U.N."

Alan Dershowitz slammed Obama’s treatment of Israel with this resolution, adding that he will go down as one of the nation’s worst presidents regarding foreign policy.

Secretary of State John Kerry defended the U.S.’s decision to not veto the UN resolution on Israeli settlements, saying that right wing extremists are driving Israel—and that this was necessary to save the peace process. President-elect Trump said Israel should stay strong.