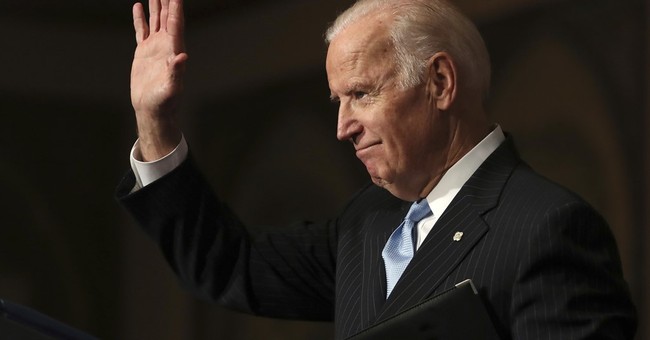 Vice President Joe Biden might have stirred the pot about his ambitions after the Obama administration packs up shop, saying that he might run in 2020 against President-elect Donald Trump. He would be approaching 78 years of age by the time the next presidential race comes around; a stinging reminder that the Democratic Party’s talent pool has dried up thanks to neglecting state and local elections. Republicans, on the other hand, have been dominating these contests. While 2020 talk is far off, Republicans can cross off Biden from the list of contenders (via Roll Call):

Vice President Joseph R. Biden Jr. said Wednesday he does not intend to run for president 2020, two days after declining to rule it out.

“I have no intention of running,” Biden told reporters outside the Senate floor Wednesday evening.

Vice President Biden and Sen. Bernie Sanders (I-VT) are probably the only candidates with wide name recognition who could successfully reach into the working class communities that voted heavily for Donald Trump. Again, it’s early; a lot can happen in four years. For now, Donald Trump has saved almost 1,000 jobs in Indiana via the deal with Carrier. SoftBank, a Japanese company, has promised to invest $50 billion in the U.S. and create 50,000 jobs. That’s two victories under his belt before he has even taken office. On the administrative front, Trump has picked Linda McMahon to head the Small Business Administration, Oklahoma Attorney General Scott Pruitt to head the Environmental Protection Agency, and Marine Corps Gen. John Kelly to head the Department of Homeland Security.

The Trump administration is coming along nicely.