A History Of Katie Couric's Assault On The Second Amendment 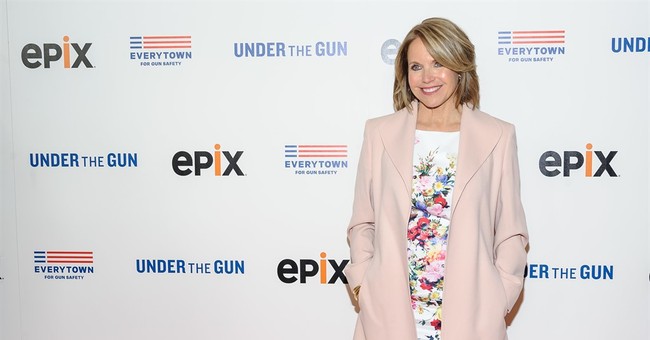 Seriously, folks—the Media Research Center and Newsbusters is the go-to treasury for liberal media bias. And they’re sure having fun with Katie Couric’s self-inflicted wound of selectively editing the audio from an interview she conducted with the Virginia Citizens Defense League for her anti-gun documentary Under the Gun. To rehash, she asked a question about background checks, which, in reality, was responded to by various gun owners in the room. On the silver screen, it was met with eight seconds of silence that only served to portray the VCDL as morons. Heck, even National Public Radio said that the move was manipulative, and would not pass muster with the news organization’s standards for conducting interviews. Ouch.

The reason Couric and company gave for the pause was for viewers to consider the question. Erik Wemple of The Washington Post did not buy it, and neither did anyone else for that matter. Couric finally took responsibility, but this isn’t new—and Geoff Dickens at Newsbusters compiled the greatest hits in anti-gun advocacy from the former Today Show host:

“Let’s talk about President Obama’s executive action on guns. What did you think when the President cried?...Were you affected by it?...I know you vehemently oppose the President’s use of executive actions. But constitutional issues aside, Mr. Speaker, do you still believe closing the gun show loophole is reasonable?”

“As your convention begins today, there is reportedly a power struggle going on within the NRA. More traditional - you're laughing, but this is what by many accounts is the case that there is a schism between traditional NRA members, conservative sportsmen, and a more radical branch of Second Amendment fundamentalist zealots.”

“A lot of people are asking about the accessibility of guns. Have you wondered about that yourself?”

Katie Couric: “Getting back to kids and guns, if you will indulge me for a moment. You cannot think of any other position the NRA could take in terms of trying to decrease the number of school shootings? You feel like this is not your bailiwick, this is not your problem?”

Charlton Heston: “Not at all. As I told you the NRA spends more money, more time...”

Couric, cutting him off: “Other than education.”

“Speaking of gun safety and children, Mr. Heston, as you well know and in fact as everyone in this country knows there has been a spate of school shootings recently that have been quite disturbing to all Americans. Given the fact that these seem to be happening with greater frequency has it caused you to rethink your philosophy about children and guns and the accessibility of guns for children?”

Actually, mass shootings are not increasing; we just may be paying attention to them more after the horrific Sandy Hook shooting. But if you look at mass shootings based on the FBI definition over a 30-year period, it’s hardly cause for the government to lead a concerted effort to massively erode of fundamental civil rights.

Lastly, and this is more of a mea culpa—I neglected to mention that even in Couric’s statement where she takes responsibility, she once again is incomplete regarding the audio. VCDL president Philip Van Cleave noted in an email that the transcript Couric provides is incomplete.

Here’s the incomplete transcript provided in the statement by Couric:

MALE: Well, one, if you're not in jail then you should still have your basic rights and you should go buy a gun.

KATIE: So, if you're a terrorist or a felon …

MALE: If you're a felon and you've done your time, you should have your rights.

MALE: The fact is we do have statutes, both at the federal and state level that prohibit classes of people from being in possession of firearms. If you're under 18 in Virginia you can't walk around with a gun. If you're an illegal immigrant, if you're a convicted felon, if you've been adjudicated in same, these things are already illegal. So, what we're really asking about is a question of prior restraint. How can we prevent future crime by identifying bad guys before they do anything bad? And, the simple answer is you can't.

And, particularly, under the legal system we have in the United States there are a lot of Supreme Court opinions that say, "No, prior restraint is something that the government does not have the authority to do." Until there is an overt act that allows us to say, "That's a bad guy," then you can't punish him.

Van Cleave identifies the female as Patricia Webb. Oh, and he’s not happy about with the response the  filmmakers gave upon being caught red-handed:

…The transcript stops at a convenient place for Katie, where Patricia Webb has just asked Katie rhetorically, "Tell me one law that has ever stopped a crime from happening.” That sounds like an odd response by itself, but Pat goes on to clarify exactly what she means and it doesn’t help Katie’s case. There are other responses damning to Katie’s position on gun control, too, but none of that made it into the transcript.

All Katie had to do was put the audio of the full 4-minute response on the apology page, but she knew that people would be less likely to read a transcript than to listen to some audio. And if they did read the transcript, the last thing they read, with Katie’s edit, sounds like the group isn’t firing on all its cylinders.

If you ignore the twisting of gun-owner's words by taking a comment out of context, KATIE STILL DOES NOT SAY SHE WILL FIX THE FILM! Instead somebody watching the film on cable will have no idea that there is an “apology" buried on the film’s website for the unethical liberties Katie took with the VCDL members' responses.

Here’s the full audio again, along with the clip that shows how the VCDL was portrayed in the documentary: