Fired Phoenix VA Director Who Claims Part of Reform Package Is Unconstitutional, Could Get Her Job Back 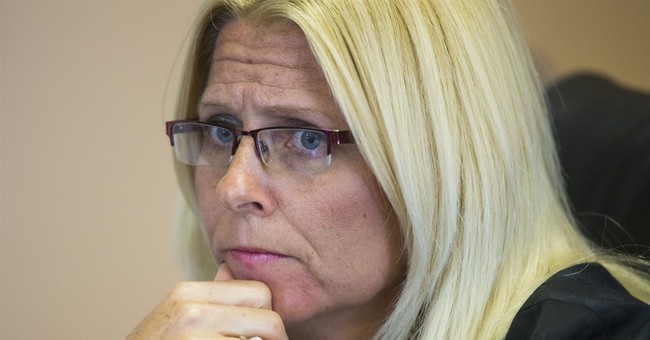 Sharon Helman ran the Veterans Affairs center in Phoenix between 2012-2014. She was fired in the wake of the discovery that VA centers, including the one she once administered, were keeping veterans on extraordinary long wait lists regarding appointments, and took great lengths to hide them, according to CNN. They added that she also plead guilty to not reporting $50,000 in gifts from a lobbyist. Helman’s lawsuit states that parts of the Veteran Affairs reforms signed into law by President Obama, are unconstitutional (via CNN):

The former head of the Veterans Affairs office in Phoenix, who was fired in the wake of the VA wait-time scandal, could find an easier path back to her old job because of a decision by Attorney General Loretta Lynch.

Sharon Helman, who is suing the federal government to win her old job back, is arguing that a key portion of the reforms passed in the wake of the scandal is unconstitutional and denies her an important step to appeal her firing. Lynch alerted House Republican leaders Tuesday that the Justice Department will continue fighting against Helman's reinstatement but is ceding that important argument to her.

"I note that the scope of this decision is narrow. Although the Department of Justice has decided not to defend (VA reform law) against the Appointments Clause challenge in this case, the department will continue to defend the vast bulk of the statute," Lynch wrote in a letter House Majority Leader Kevin McCarthy Tuesday. The letter was obtained by CNN on Wednesday.

Helman was one of the first people fired after President Barack Obama signed the reforms into law, but she sued the federal government last October, seeking her old job back. Helman ran the Phoenix VA from 2012 to 2014, during which federal inspectors found that 3,500 veterans had been waiting on secret wait lists in Phoenix.

Confronted at the time by CNN's Drew Griffin, Helman said, "It's never come from me."

Helman plead guilty earlier this year to not reporting $50,000 in gifts she received from a lobbyist seeking business with the VA, including a car and a $5,000 check.

House Republicans were outraged Wednesday, saying the Obama administration had effectively cleared a path for one of the most important people at the center of the VA scandal to regain her job -- essentially undoing months of work to clean up the VA.

In October of 2015, three reports from the Veterans Affairs Inspector General noted systemic mismanagement at clinics in California, Illinois, and Alaska. The wait times have led to fatal consequences. Another report noted that hundreds of thousands of veterans (at least 307,000) might have died as they waited for treatment. Moreover, the wait times are still plaguing Veterans Affairs. USA Today reported that wait time manipulation by VA supervisors is still ongoing across several states. Recently, VA Director Bob McDonald compared the wait times at VA hospitals to those seen at Disney. Oh, and thousands of living veterans got their benefits cut because the VA thought they were dead.

“The Obama administration’s surrender to special interests and entrenched bureaucrats is an insult to all veterans, and disingenuous in light of the administration’s support for the law in 2014. The administration’s refusal to fully and completely defend this law opens the door for ethically challenged, even criminal, individuals like former Phoenix VA Medical Center Director Sharon Helman, who oversaw the wait lists on which hundreds of veterans died waiting for care, to regain their jobs and put veterans’ lives in jeopardy once again. This action is inexcusable. Our veterans deserve an administration committed to protecting their well-being just as they have protected ours.”