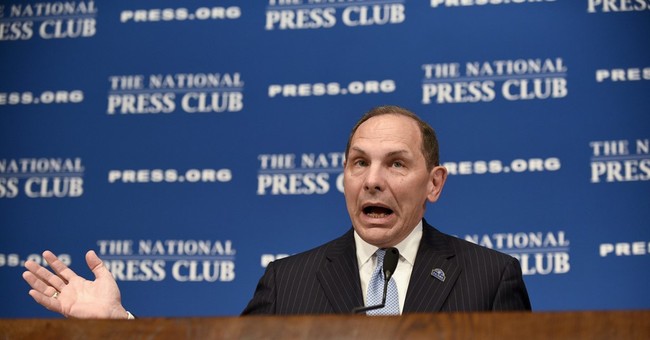 It's no secret that wait times at the VA's hospitals have been out of control, to the point where people have died as a result of the delays. To VA Secretary Robert McDonald, however, this is no big deal. After all, Disney doesn't judge its success by wait times at its parks, so why should lifesaving hospitals?

"When you got to Disney, do they measure the number of hours you wait in line? Or what's important? What's important is, what's your satisfaction with the experience?" McDonald said Monday during a Christian Science Monitor breakfast with reporters. "And what I would like to move to, eventually, is that kind of measure."

First off, this is absolutely insane. To the best of my knowledge, nobody has died from waiting in line for the Seven Dwarfs Mine Train or to get Anna or Elsa's autograph. Those things aren't necessities--healthcare is. A person can deal with a long wait to see Mickey Mouse. For a lifesaving surgery or mental health care? Not so much.

Further, Disney absolutely cares about how long its guests wait in line for attractions--that's why programs like FastPass+ exist--to help people combat wait times. There's also an app that will display waits in real time. (The VA, to the best of my knowledge, has neither of these things.) If guests aren't satisfied with their park experience, they won't return--so Disney has a vested interest in keeping waits short at its parks. Unlike the VA, however, a theme park attendee has several choices about where to go: SeaWorld, Knott's Berry Farm, and Universal Studios exist, for instance. The VA is the only option for veterans.

This is disturbing and out-of-touch rhetoric from someone who should know better. The VA isn't Disney. There's no comparing the two.