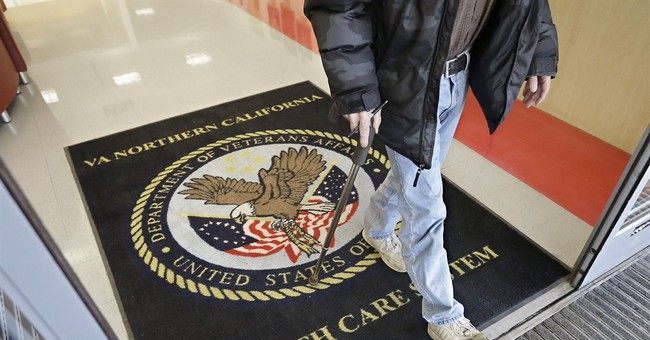 By now, we all know that the scandal that has engulfed the Department of Veterans Affairs is an absolute disgrace. The wait times alone are unacceptable, and they could have led to the deaths of hundreds of thousands of veterans–307,000 to be exact. Sadly, we will never be able to verify the real number since the VA’s paperwork on appointments is shoddy and the database never updated on a regular basis. At times, the VA’s suicide hotline goes to voicemail. And for all of the pervasive malfeasance, barely a handful of people have been dismissed. Now, we have VA supervisors falsifying wait times across several states (via USA Today):

Supervisors instructed employees to falsify patient wait times at Veterans Affairs' medical facilities in at least seven states, according to a USA TODAY analysis of more than 70 investigation reports released in recent weeks.

Overall, those reports — released after multiple inquiries and a Freedom of Information Act request — reveal for the first time specifics of widespread scheduling manipulation.

Employees at 40 VA medical facilities in 19 states and Puerto Rico regularly “zeroed out” veteran wait times, the analysis shows. In some cases, investigators found manipulation had been going on for as long as a decade. In others, it had been just a few years.

In many cases, facility leaders told investigators they clamped down the scheduling improprieties after the Phoenix scandal, but in others, investigators found they had continued unabated. The manipulation masked growing demand as new waves of veterans returned from wars in Iraq and Afghanistan and as Vietnam veterans aged and needed more health care.

As recently as October, the Government Accountability Office said the VA’s wait-time system still is prone to scheduler error and produces unreliable data.

USA Today added that the VA said they’ve retrained schedulers, and expanded evening and weekend hours, but Shea Wilkes, who was one of 40 whistleblowers for this scandal, said he and his colleagues continue to see wait time manipulation at VA facilities. Oh, and the appointment process has been under fire since 2005:

This is not the first time the VA has said it would fix problems with scheduling. When the inspector general found in 2005 that VA schedulers were improperly booking appointments — and wait lists were therefore underestimated by as many as 10,000 veterans — the agency initiated a “national education plan” to retrain schedulers and supervisors. In 2010, VA officials discovered schedulers were using “gaming strategies” to falsify wait times to meet agency performance targets, and they required all schedulers to undergo new training, once again.

Again, this is a national disgrace.