Sanders, Radio Hosts Get Into Testy Exchange Over Whether A Left Wing Agenda Can Work When Government Is So Bad 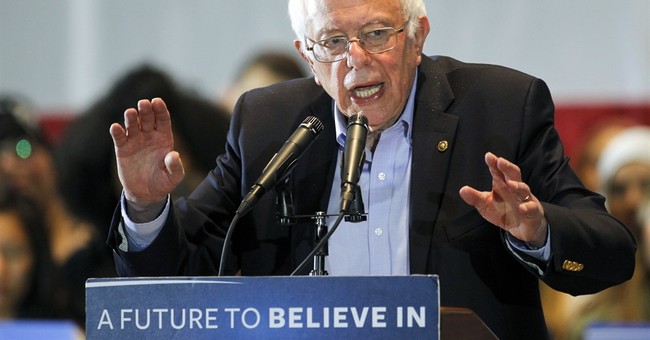 Vermont Sen. Bernie Sanders, Hillary Clinton, and Donald Trump are making the rounds in California ahead of the June 7 primary. Trump has already clinched the Republican nomination, but Sanders and Clinton are still duking it out, despite the fact that Clinton is the likely nominee. Yet, as Sanders campaigns throughout the Golden State, the hosts of the John and Ken Show on KFI Radio got into a rather testy exchange with Sanders over his agenda and the efficiency of government in a recent interview that was transcribed by Buzzfeed.

The hosts noted that Sanders platform is far left, dotted with items like free college and universal health care. But they’re main question was how is this going to work, let alone garnering more support for these programs, when you hear stories about the inexcusable waiting times (and appalling care) at Veterans Affairs, along with the pervasive failure over at the Transportation Security Administration. Some of these security lines have resulted in travelers waiting hours to be screened prior to boarding. Airlines are not happy with the deteriorating situation. Recently, a top official dealing with was removed from his position as head of security for the TSA, though he had collected $90,000 in bonuses despite no improvements with the security line situation.

The impetus for the heated exchange was connected to a question asked concerning Sanders calling out Disney CEO Bob Iger for not paying his workers a living wage. Iger, a Clintons supporter, responded of Facebook, noting that that Disney has created thousands of jobs in the U.S.—and asked the self-described Democratic socialist what he has done to improve the U.S. economy, which has been minimal to say the least. The hosts then asked Sanders

HOST: “You didn’t answer the main question about what jobs have you created. It’s pretty vague, your background. What have you done in your life?”

HOST: I’m not really clear on what kind of jobs you’ve had, besides Senator.

SANDERS: I have been in the U.S. House of representatives and actually before that, I was a mayor of 8 years. You ever been to Burlington, VT?

HOST: Yeah, but have you ever not been paid by taxpayers?

HOST: All right, let me ask you about that because obviously your proposals expand government a lot, cost a lot of money, when it comes to free health care, free college educations, when we look at the government and we see the VA feeding cockroaches to veterans in Chicago—

BERNIE: All right, you know—

HOST: We see the TSA—

HOST: What is it that you see about the government that we don’t between let’s say the TSA and the VA for example?

BERNIE: What I see is—apparently you love the work that Wall Street is doing—

HOST: No, no, you’re generalizing.

BERNIE: Wait a second! Can I respond to you?

HOST: No, we don’t, but you’re generalizing, that’s not fair. What do you know about us?

SANDERS: Why did you just—you just told me that the VA is feeding cockroaches. I was chairman of the Veterans committee. Millions of veterans every day are getting high-quality, uh, health care. Now, in some instances, the health care is inadequate and people are doing a bad job—of course, it’s a huge healthcare system. You don’t think that happens in private hospitals? You don’t think that happens in private doctor’s offices? So the answer is, yeah, if the question is, do I believe that government should play an important role in making sure that elderly people can live in dignity so that we have decent social—

HOST: That wasn’t my question!

SANDERS: Excuse me! Can I—excuse me!

HOST: My question was about—

SANDERS: Wait a minute, you know, you invited me on the program. And I’m happy to be on the program. And I’d like to answer your questions, but I have to respond. I do believe that government should make sure that all of our people earn a decent minimum wage by raising the minimum wage to 15 bucks an hour. Yeah I do believe the United States should join every other major country on earth in guaranteeing health care to all people.

HOST: My question about the VA was, it’s pretty clear from the scandal the last couple of years that the veterans are waiting weeks and sometimes months. Sometimes, they’re dying before they get an appointment and sometimes the supervisors are lying about the waiting lists and lying about the response time. And in Chicago, they’re breathing in black mold at the nursing home and they’re being served cockroaches. It seems like there’s a lot of dysfunction spread around the country. What I want to know is, it would help get more support for your ideas if we saw the TSA running properly, the VA running properly, and similar agencies that the public has to deal with.

SANDERS: Well, I think it goes without saying that we want all of our government agencies to run as cost-effectively and as efficiently and as well as possible.

HOST: Why don’t they?

SANDERS: Excuse me. But if you all think that the private sector today is doing just a great job, let’s talk about Wall Street’s greed which drove this country into the worst economic recession and the fraud, the rampant fraud that exists on Wall Street who paid $5 billion, Goldman Sachs paid $5 billion to the government as a settlement because they were selling worthless subprime mortgage packages. You can talk about corporations that are shutting down all over America and moving to China where they pay people a few bucks an hour and bring their products back into this country.

Sanders then said he had to run, but hoped to continue this discussion at a later date. The total cost of Sanders’ agenda is a staggering $33 trillion over the next ten years, which would add $21 trillion to the national debt. Oh, and the projected $15.3 trillion in tax increases aren’t going to be enough to pay for this left wing goodie bag.