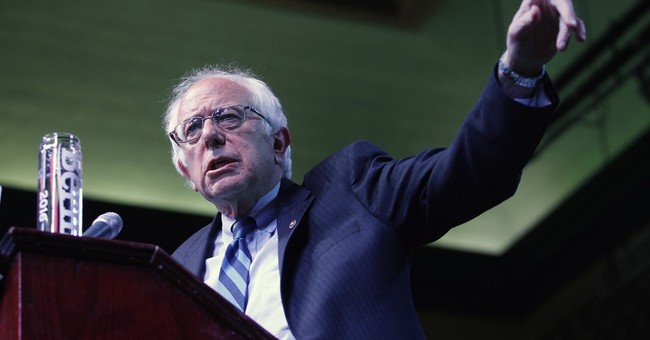 We all knew that Vermont Sen. Bernie Sanders’ goodie bag was going to be expensive. In all, his agenda would lead to an increase of spending to the tune of $33 trillion, which would add an additional $21 trillion to the national debt over the next decade. It’s a total disaster. Oh, and those $21 trillion that’s projected to be tacked onto the debt is after his $15.3 trillion worth of tax increases (via Politico):

Democratic presidential candidate Bernie Sanders has proposed a whopping $33 trillion federal spending increase over 10 years, according to a new report likely to fuel complaints his campaign promises are unrealistic.

His proposed tax increases would not come anywhere close to covering those costs, the centrist Tax Policy Center said Monday, and his plan would drive federal debt to “unprecedented” levels.

Even after accounting for his $15.3 trillion in tax increases, the Tax Policy Center said, Sanders would still add $21 trillion to the debt over the next decade. That would amount to more than doubling the big deficits the government is already projected to run.

That would create a potentially significant drag on the economy, which could increase costs for everyone from businesses looking to invest in new equipment to people trying to buy a home, said Len Burman, head of the Washington-based group.

“That could be very damaging to the economy,” he said. “Sanders would obviously need a whole lot more revenues to pay for this.”

And those services are most likely not going to be good. If you look to other socialist dystopias, like Venezuela, government services are a disaster. For one thing, the country is so broke that it soon isn’t going to have enough money to print…its own money; it has rolling blackouts du to energy shortages, supermarkets that aren’t stocked, growing starvation, and increased looting. It’s become so miserable that folks are now hunting dogs, cats, and pigeons to survive. Luckily, we have a diverse economy that isn’t dependent on petro dollars, but adding $21 trillion to the debt isn’t an issue? Spending and taxing more on subpar services isn’t an issue? Sanders’ health care plan is a train wreck for the working poor, with low-income minority workers projected to cough up more in payroll taxes and benefit minimally, if at all, from Bernie’s plan to give health care to all Americans.

Even Paul Krugman thinks Sanders’ agenda isn’t serious, claiming that he went for “easy slogans over hard thinking.” His meeting with the New York Daily News editorial board showed a man way out of his league, which turned into a disastrous story about how he’s not ready to be president. The Washington Post even noted that Sanders’ claims are often “fantastical,” with very little detail as to where the savings will come from with his hard left agenda.

At a price tag of $33 trillion, with an additional $21 trillion added to the national debt—yeah, it’s fantastical all right; fantastically ruinous for this country. Let’s not try to import the Venezuelan experience, or elect an americanized Michael Foot. I’m not a fan of eating dog, or left wing British politicians.