Trump Criticizes Manchin: 'He Talks But He Doesn't Do Anything' 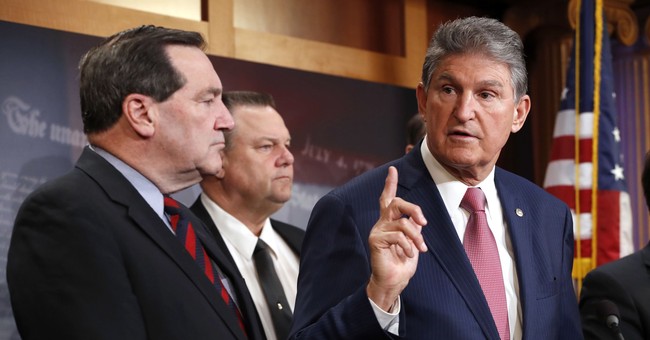 President Donald Trump blasted Sen. Joe Manchin (D-WV) and other Democrats who are perceived as centrists Wednesday in an interview the The New York Times. He said that despite the appearance of some willingness for compromise, Manchin and others like him are all talk and no action.

“Like Joe Manchin,” Trump said. “He talks. But he doesn’t do anything. He doesn’t do.”

Trump said Manchin will say “‘hey, let’s get together, let’s do bipartisan.’ I say, ‘Good, let’s go.’ Then you don’t hear from him again.”

Despite his frustration over the unwillingness to compromise, Trump said that “he still hoped Democrats will work with him on bipartisan legislation in the coming year to overhaul health care, improve the country’s crumbling infrastructure and help young immigrants brought to the country as children.”

West Virginia voted overwhelmingly in favor of Trump in the 2016 election and Manchin faces a tough re-election fight in 2018.

In the face of pressure to toe the Democratic party line, Manchin said in August that he “doesn’t give a sh*t about re-election” and wants to do what’s best for his state.

Manchin had difficulty explaining his recent opposition to the GOP tax bill last week and even acknowledged that it will benefit the majority of West Virginians. He ended up claiming that he opposed the bill because the tax cuts weren’t permanent and because it added to the national debt.

Regarding his upcoming election, Manchin told Politico recently, “I’m not worried at all. Not one iota am I worried.”