Can Anything Be Done to Stop the Biden Administration's Horrendous Iran Deal? 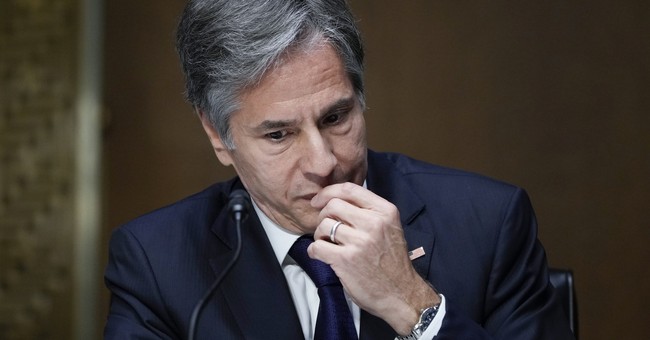 We return, once again, to this issue, which is of urgent and profound importance.  Following a string of capitulations and concessions, the Biden administration appears poised to strike a finalized nuclear agreement with Iran's 'death to America' regime, via the Russians.  We've addressed this process in multiple posts over recent weeks, but now it seems as though the deal may go through imminently.  As we mentioned late last week, there are some indications that the sanctions thaw sought by Tehran is already underway.  What, if anything can be done to stop its disastrous implementation?  Former federal prosecutor and terrorism expert Andy McCarthy, whose work we've been quoting quite a lot on this subject, has thoughts.  He spends much of his latest piece explaining why Congress has little power to stop this agreement from taking effect, even if votes are taken and a majority of members vote against the accord.  That's a remnant of the 2015 Obama-Iran deal process.  McCarthy concludes that ultimately, Republicans' strongest weapon (with an eye toward changing the law in the future) is the aggressive use of their megaphone:

Congressional Republicans need to fully expose Biden’s new Iran deal — its reliance on the very same Russian despot whom Biden has labeled a war criminal, its material support to the world’s leading state sponsor of anti-American terrorism, its sanctions relief to the murderers of hundreds of American troops, its inevitable effort to hide the embarrassing provisions as if they were private agreements between Iran and the U.N.’s atomic-energy agency — the same scam Obama ran in 2015 to withhold information from Congress, as if the U.S. were not a party to these arrangements. To be blunt, Republicans need to use Iran’s terrorism and Russia’s ongoing atrocities as spotlights on this deal, to make it as politically painful as possible for Biden and any Democrats who support it. Perhaps most of all, Republicans need to put nations, financial institutions, and corporations on unmistakable notice that Biden’s deal does not have the force of law.

Everyone needs to be admonished that, when Republicans are in a position to do so, they are not only going to reimpose sanctions; they will ratchet up sanctions because, by then, Iran will have become more of a menace, thanks to Biden. Those mulling whether to deal with Iran based on Biden’s deal should understand that the U.S. government, under Republican control, will regard them as flouting sanctions. The fact that Biden won’t enforce these sanctions does not mean they have been repealed; they remain American statutory law, and that could make those who do business with Iran — especially those who make long-term commercial arrangements — vulnerable to financially onerous measures when the sanctions start being enforced again. The message should be: If you rely on Biden’s waivers — in an arrangement engineered by Russia in order to empower Iran — you do so at your peril. Living outside the law, as President Biden plans to do, is a two-edged sword. He may think it frees him to do things Congress would otherwise prevent. But lacking the force of law, Biden’s scheme cannot give participants the protection and stability that treaties and statutes provide.

In other words, they need to delegitimize the deal, making clear -- as some Republicans did in the Obama era -- that it is not an American commitment, but rather one president's approach. Roughly 60 percent of Congress opposed Obama's terrible pact with Iran, and this latest push is even weaker than that one was. The 2015 agreement was not a consensus or sustainable American foreign policy, and it lacked the binding legal legitimacy of a Senate-affirmed treaty. That's why President Trump was able to pull the United States out of it with the stroke of a pen, a decision I applauded. The same dynamic applies here. That may give various entities (companies, governments, etc.) some pause before they decide to fully participate with in a new, and possibly temporary, framework. The problem is that given the (reportedly very short) duration of various restrictions on Iran's nuclear program, it's likely that a future president will soon need to contend with a nuclear-armed Iran.  The regime is not prevented from developing a nuclear arsenal under this pact.  If anything, that process is slightly delayed, but enshrined.  In the meantime, we are like to watch a see-saw effect in American policy vis-a-vis Tehran, toggling from Democratic weakness to Republican hawkishness:

Rosatom's $10 billion contract to build two nuclear reactors for Iran at Bushehr is now under strict scrutiny from the U.S. Senate and House of Representatives.

Republicans will likely control both chambers next year - and could reimpose strict sanctions. CC-ing @Amb_Ulyanov. https://t.co/kzR70wh8V8

The Iranians, Russians, and Chinese are thrilled with Biden's forthcoming deal.  Not thrilled?  Three former members of Biden's own negotiating team, most of Congress, Israel, and Arab gulf states -- who are especially aghast by allegations that the agreement will delist the IRGC as a formally-designated terrorist organization:

I reported: Gulf states have appealed to the Biden administration: Do not remove the IRGC from the list of terrorist organizations. Gulf officials wondered to their US counterparts: "What is an Iranian statement to reduce tensions at all worth, how can they be trusted"

Other critics are emerging, too:

"It's hard to imagine that anyone can reach a comprehensive agreement like the current JCPOA when talks with the IAEA...are deadlocked."https://t.co/TD5SFwGrXX

I'll leave you with this -- Iran is already messing around on their end of a hostage release/ransom transaction with the United Kingdom.  They are confident that they will get their way in the end no matter what, and they're bragging about it:

#BREAKING: In a violation of #Iran's agreement with the U.K., a family member of Morad Tahbaz confirms to the BBC that "he's still in Evin, he has no ankle tag," and Iranian authorities told Tahbaz "there is no agreement and we decide what we want to do."https://t.co/U8B6KbGs9e

A contact of mine in Evin prison has told me that, contrary to the reports Morad was simply having an electronic tag fitted, he has instead been returned to his prison ward. This is a disgraceful violation of an agreement less than 3 days old. @trussliz @FCDOGovUK https://t.co/bwMTufsnrb

This regime is genocidal, fanatically anti-American, and utterly untrustworthy.  And Biden is obsessed with handing them the store in exchange for virtually nothing.  As you survey the mess that is American foreign policy over the last year-plus, remember: The adults are back in charge.