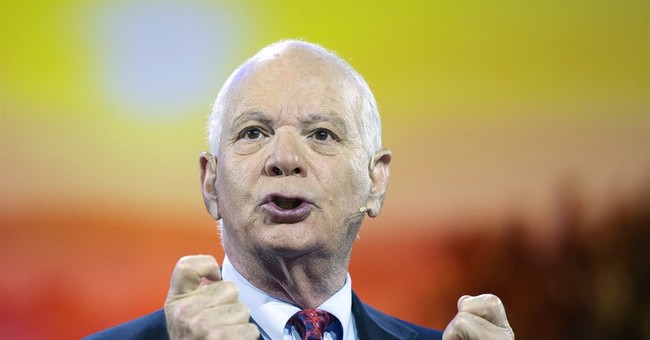 The top Democrat on the Senate Foreign Relations Committee, Maryland's Ben Cardin, will vote against President Obama's unpopular and reckless nuclear deal with Iran's anti-American regime. Cardin lays out his reasoning in a Washington Post op/ed:

The JCPOA legitimizes Iran’s nuclear program. After 10 to 15 years, it would leave Iran with the option to produce enough enriched fuel for a nuclear weapon in a short time. The JCPOA would provide this legal path to a country that remains a rogue state and has violated its international nonproliferation obligations for years. It would provide Iran with international endorsement of an industrial-scale nuclear program. Worse, Iran would be economically strengthened by frighteningly quick relief from sanctions and international economic engagement. If Iran violates the agreement, building international support for new sanctions would take too long to be effective. A military response in this scenario would be more likely, although disastrous...there cannot be respect for a country that actively foments regional instability, advocates for Israel’s destruction, kills the innocent and shouts “Death to America.” I remain troubled that we agreed to a challenge period of up to 24 days for International Atomic Energy Agency (IAEA) inspections should Iran deny access to an undeclared, suspicious site. And I cannot support lifting the U.N. arms embargo and ballistic missile sanctions.


A thoughtful, substantive critique. Between Cardin and Bob Menendez, the two most recent ranking Democrats on this influential committee have now weighed the evidence and have determined that they cannot in good conscience sign on to the president's agreement.  Tellingly, these two are among the Congressional leaders who are most steeped in the details and dynamics at play. The White House cynically accuses opponents of the deal of being warmongers, a claim rejected by a number of dissenting Democrats who've pointed out that they opposed the Iraq War.  Cardin rebuffs that smear, too, arguing that the deal could very well increase the likelihood of military intervention.  With an Democratic House member from Illinois also announcing his intent to vote against the deal today, approximately 60 percent of Congress now opposes the pact, by one rough whip count:

The American people, who initially supported the notion of cutting a strong deal with Iran, have turned sharply against the agreement as its contents have been reported. Because of Obama's "it's not a treaty" power play, the only remaining drama is whether Senate Democrats will successfully obstruct a debate and vote on the deal. Harry Reid has vowed to lead this effort, with the White House's full support. Is every single Senate Democrat who supports the accord (including Colorado's Michael Bennet, as of today) willing to deny themselves and their colleagues a say on this matter of utmost geopolitical importance? The public overwhelmingly believes that Congress should have the final say on this deal.  Will Harry Reid's crew succeed in blocking any vote at all? The Washington Examiner's Phil Klein offers a strong closing argument against the Iran Deal on the merits, urging Congress to move forward with a vote of disapproval. An excerpt:


As a result of his deal, Iran will be undoubtedly in a stronger position in 15 years. It will transition from an economy that was on the brink of collapse due to crippling sanctions, to one that will have been freed of sanctions and thus much more robust. Once sanctions are lifted, European companies can start doing business in Iran, meaning that over time they'd build up more ties to the nation and they'd be lobbying their governments against any new sanctions. Due to the lifting of the arms embargoes, Iran will be able to obtain more sophisticated conventional weapons and ballistic missiles. And the U.S. and its allies would be working with Iran to protect its nuclear facilities against the threat of sabotage from traditional U.S. allies such as Israel. Even in a best-case scenario in which the deal "works" Iran will have benefitted from decades of running an illicit nuclear program, by pocketing short-term economic and military gains, and still preserving its long-term ability to build nuclear bombs. This will provide an incentive for other bad actors to pursue a similar path, as well as encourage nations such as Saudi Arabia, Egypt, and Jordan to demand similar leniency...Regardless of whether or not Obama will veto a resolution to disapprove the deal, congressional rejection of the deal would still be important. It would be asserting the traditional separation of powers. Obama has set a terrible precedent — that a president can ignore the constitutional requirement to obtain two-thirds support for any treaty, go through the U.N. Security Council before the U.S. Congress and then present a major international agreement to Americans as a fait accompli. Having a co-equal branch of government reject a deal that a majority of Americans oppose would send a clear signal to international firms seeking to do business in Iran that they better hold off, because U.S. policy toward the terrorist state could soon be dramatically different once Obama is out of office.


Congress will take up a resolution to disapprove of the Iran deal after the Labor Day recess.  The House appears likely to vote on the measure on…September 11th.  Meanwhile, Iran's "supreme leader" insists that the deal doesn't go into effect until sanctions are lifted, sending tens of billions of dollars into terrorism-sponsoring regime's coffers.  President Obama has admitted that some of this money could be used to finance more mayhem and death.  Iran has also repeatedly asserted that international inspectors will not be permitted at certain military sites, and has secured a secretive side deal with the IAEA to effectively inspect itself at one controversial location -- which they've both  scrubbed and expanded.  Seems legit.