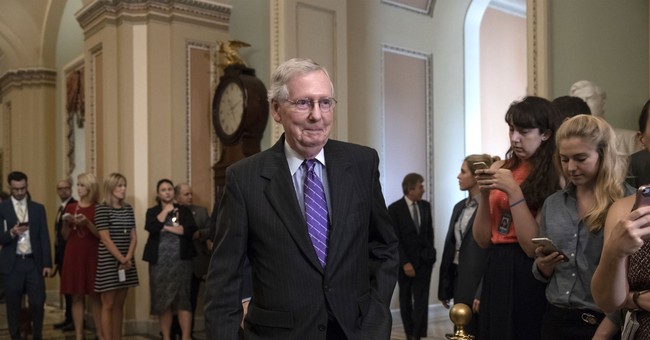 If you're a regular reader, this trend doesn't come as a surprise.  We've been tracking and flagging it since the Kavanaugh ordeal, which galvanized legions of previously-disengaged or underwhelmed GOP-leaning voters.  We've demonstrated how that impact has continued to reverberate, particularly in Senate races.  And now, the mainstream conventional wisdom appears to be catching up.  Charlie Cook, who leads the vaunted Cook Political Report, is out with a new detailed analysis pointing to a clear uptick in Republicans' fortunes:

Charlie Cook: “One question that keeps coming back up is whether those who led the out-of-control demonstrations on Capitol Hill against the Kavanaugh nomination have any understanding of how much damage they did to Democrats” https://t.co/DfbkIhUmGo

The most dramatic change over the last six weeks in the midterm election picture is clearly in the Senate, but the House situation has subtly changed as well. Not long ago, the most likely outcome for the Senate was either no net change at all, or a shift of one seat, so the Senate would remain under GOP control, with the majority holding 50-52 seats. Today, a Republican net gain of a seat or two seems most likely, moving the GOP up to either 52 or 53 seats, though a gain of three seats or no net change are entirely possible. There remains some chance of Democrats picking up two seats and a majority, but those odds are long, no better than 1 in 5, and seemingly getting longer...Once you saw Republicans and conservative voters coming home and getting energized for the first time this election cycle, on top of this lopsided Senate map of seats overwhelmingly in GOP-friendly states, Democrats' hopes went down precipitously.

In the House, Democrats remain heavily favored to capture a majority; the change is that their chances of blowing the House wide open with a gain of 40-50 seats or more have diminished. In the suburban-oriented districts where most of the competitive House races are, things remain extremely challenging for Republicans. A large gender gap driven by suburban, college-educated, and younger women remains a very strong dynamic. But the more rural- and small-town-oriented districts—those with substantial numbers of Republicans, conservatives, and Trump backers—are now fully awake and engaged, moving some of those districts back away from the edge of competitiveness. Republicans were looking quite vulnerable through the summer in districts that one would never guess they would have to worry about. Today, Democrats seem more in line to score a net gain of between 20 and 40 seats.

Three weeks out, the GOP looks like it has a real opportunity to improve upon its current Senate (bare) majority, and has perhaps put itself in a position to mitigate expected losses in the House.  Some of these polls are undoubtedly too close for comfort (especially with the distinct possibility of undecideds stampeding toward the Democrats at the last minute), but they're vastly improved over the doomsday scenario some polling projected several months ago.  Again, this is not to say that Republicans don't face some real struggles.  But things could be, and have been, markedly worse.  On the Senate side, the most endangered incumbent on either side is Democrat Heidi Heitkamp of North Dakota.  Already trailing considerably in the polls, Heitkamp's campaign committed a truly dreadful unforced error, publicly identifying a number of women -- some erroneously -- as survivors of assault against their consent.  Cornered with concrete evidence of malfeasance, Heitkamp appeared on a conservative radio show in North Dakota yesterday, profusely apologizing for a "colossal" screw-up:

Heitkamp: "This is on me. This has got my name on it... The worse thing you can do is take away their privacy... And I did exactly that. And I need to personally apologize and say I was wrong... There's no sugarcoating this... This was a collosal error."

This comes on the heels of her 'no' vote against Justice Kavanaugh, which flew in the face of the overwhelming sentiment of her constituents.  And her explanations left a lot to be desired.  Any hope she had of painting her opponent as insensitive toward female victims vanished when her own ad outed alleged victims without their permission.  Meanwhile, I always view New Jersey Senate races as fool's gold for Republicans, but it's clear that national Democrats are getting anxious about scandal-plagued Bob Menendez's status in the Garden State:

Luckily for Bob, despite this brutal ad dropping on him this week, the cavalry is arriving to help.  And by 'cavalry,' I mean Hillary Clinton doing what she does best -- raking in money.  But perhaps this wasn't the best omen Team Menendez could have hoped for:

I'll leave you with this hilarious fake ad from the Free Beacon team, mashing up Krysten Sinema's damage control commercial with her various attacks against her own state:

One careful statistical review shows Republican Martha McSally on the rise, but the media is doing what it can to run interference for Sinema -- including mischaracterizing an accurate line of criticism from McSally:

Not only did the Washington Post spell “Kyrsten Sinema” wrong, but they also got the quote completely wrong. McSally never accused Sinema of “treason.” She accused Sinema of “saying it’s okay to commit treason,” which is backed up by video evidence.

Yes, Sinema told someone that she didn't object to the prospect of him joining the Taliban to take up arms against the United States.  And, contra the best efforts of the hopeless spin artists at Politifact, it's also true that while McSally was bombing terrorists after 9/11, Sinema was protesting the Afghanistan war in a pink tutu. In fact, here's the ad again, just for good measure: