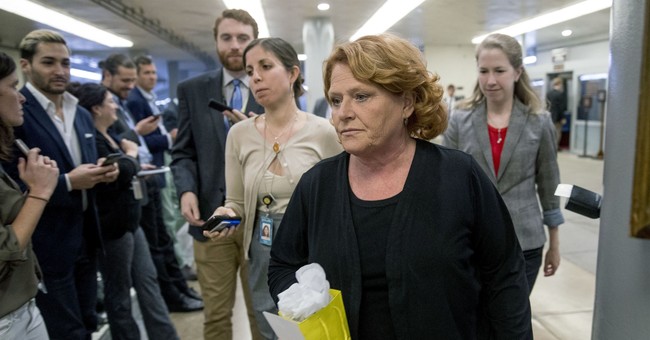 Sen. Heidi Heitkamp (D-ND) had an understandably emotional reaction to a recent comment from her Republican challenger Kevin Cramer. Responding to the sexual assault allegations against Supreme Court nominee Brett Kavanaugh and the "Me Too" movement at large, Cramer spoke out against the current "movement toward victimization" and added that the women in his family were "tough."

Heitkamp responded to Cramer by sharing that her own mom was a sexual assault survivor. Then, in a new open letter to Cramer which serves as a new ad, she writes that she and several other North Dakotan women are determined to show Cramer what “prairie tough” looks like.

At the bottom of the letter is a long list of North Dakotan women who are identified as sexual assault survivors. However, some of the women named in the ad say the campaign did not seek their permission.

“A lot of these people listed, including me, did not give anyone permission for our names to be posted,” Kady Miller wrote on Facebook. “I don’t even support Heidi Heitkamp and I am not a domestic abuse survivor.”

"This is completely unprofessional," commenter Keeley Beck, who also found her name on Heitkamp's list, wrote. “I want justice,” she added. “For myself and others who were illegally used and taken advantage of for corrupt, infactual, political propaganda.”

Another women wrote on Facebook that she was "disgusted" and "furious" to see her name in the ad.

Heitkamp released a statement Tuesday apologizing for the ad.

“Sexual assault is a serious crime – and one that too many North Dakota women have experienced. In an attempt to bring awareness to this issue and push back against dismissive comments toward sexual assault survivors by Kevin Cramer, our campaign worked with victim advocates to identify women who would be willing sign the letter or share their story. We recently discovered that several of the women's names who were provided to us did not authorize their names to be shared or were not survivors of abuse. I deeply regret this mistake and we are in the process of issuing a retraction, personally apologizing to each of the people impacted by this and taking the necessary steps to ensure this never happens again.”

Heitkamp is currently trailing Cramer by an average of 9 points.