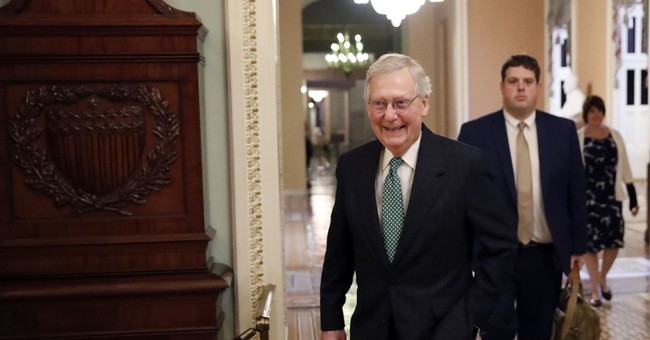 Late last week, just prior to Justice Kavanaugh's confirmation, we highlighted a number of data points suggesting that the Republican base had been reinvigorated by the fight.  Senate Majority Leader Mitch McConnell is seeing the same thing, telling anyone who will listen that the Left's tactics in the SCOTUS knock-down-drag-out have energized GOP voters ahead of next month's midterm elections.  He's not blowing smoke; the Republican strategists and pollsters I've checked in with over the weekend are unanimous in their assessment that the Kavanaugh brawl has fired up and focused the minds of many right-leaning voters.  Whether that momentum will remain intact following a major victory remains to be seen, but a fresh round of Senate polls suggest that Democrats' uphill climb to win back the upper chamber has gotten steeper:

In Texas, I've been reliably informed that Cruz's internals show him ahead in the high single digits.  Others are hearing similar things, too.  For him to be at 50 and leading by six in the CBS poll is certainly another a welcome sign for his campaign.  Republican voters in Texas have just been reminded about what the consequences could look like if Democrats' numbers in the US Senate increase.  The Tennessee data point is also significant for two reasons: Not only is it the second consecutive poll showing Marsha Blackburn pulling ahead out side the margin of error, the Democratic nominee's own actions indicate that her surge is real.  The notion that he'd have put out a statement swearing that he'd have voted to confirm Kavanaugh is a strong 'tell' that this issue has deep resonance and is benefiting the GOP.  And even if Bredesen wants Tennessee voters to believe he'd been an 'aye' on this nomination, his election would dramatically increase the likelihood of a Chuck Schumer-led Senate, under which President Trump's judicial nominees would be dead in the water.

As I've been saying for months, a vote for any Senate Democratic incumbent or nominee, with the possible exception of Joe Manchin, is a vote for scorched-earth tactics and obstructionism on this essential front.  They've told us as much.  The last two weeks have demonstrated just how high the stakes are, and just how ruthless the Democrats can be.  Conservative voters must act accordingly.  Sharp political observer Josh Kraushaar runs some back-of-the-envelope math and concludes that if the GOP holds onto seats in Texas and Tennessee -- and if Heidi Heitkamp is, in fact, cooked in North Dakota, as it appears -- the likely worst-case scenario for McConnell is a 50/50 split after the midterms:

Senate math, in a nutshell.

The specific breakdown will make a big difference for Ds long-term hopes of winning the Senate. If they lose 2-3 seats, hard to win back in 2020. https://t.co/t2iK2E9A41

Think of it this way, if Democrats sweep Nevada and Arizona (both are very competitive), but the GOP knocks off Heitkamp, that would result in 50 seats being controlled by each party.  Republicans would have the technical majority because of Vice President Pence's tie-breaking vote.  But as we've seen in almost every crucial vote over the past two years, having little-to-no margin for error can be extremely complicated and stressful.  Better to take advantage of an historically favorable map and develop some breathing room.  How could that be achieved?  By knocking off a handful of other Democratic incumbents in Trump-won states.  Joe Donnelly in Indiana defied his own constituents and joined the left-wing mob against Justice Kavanaugh.  They failed, but Donnelly contributed a valuable vote to their effort, as did Jon Tester (whose Montana race just got shifted to "toss up" by the Cook Political Report), and Claire McCaskill.  Speaking of Missouri, a plugged-in politico out there is drawing attention to some new polling that bodes well for GOP challenger Josh Hawley:

Blunt beat Kander by 0.8% in #SD34 in 2016. Hawley is running 5 points better than Blunt did in this district. Blunt won statewide by ~3% so this is a great indicator for Rs. #MOLeg #MOSen

Sen. Roy Blunt rode Trump's coattails to re-election, so it's obviously a positive sign for Hawley if he's running ahead of Blunt's performance in a key area in the state.  The counterpoint is that Blunt benefited from presidential-level turnout, and McCaskill could pull it out if the composition of the electorate looks markedly different on election day.  Turnout, turnout, turnout.  The Florida race seemed to be see-sawing toward incumbent Bill Nelson, but that contest is looking extremely tight again (three of the last four polls show an exact tie, or a one-point race).  There are ample pick-up options if Republican voters mobilize in targeted red states.  If the data continues to show that Sen. Heitkamp is finished (not forgetting that she pulled off a narrow upset in 2012) and Manchin is fairly safe, enormous resources should be redirected to Indiana, Montana, Missouri, and Florida.  Since I gave you a piece of encouragement from Kraushaar earlier, here's his latest reality check about the Democrats' likelihood of winning back the House, buttressed by similar reporting and analysis:

Dems still heavy faves to win House, thanks to their dominance in the suburbs.

My dispatch from OVERLAND PARK, Kansas — not far from Trump’s rally last night, but a political world apart.https://t.co/i3Gbs3Dx0a https://t.co/OlQOVzaLLP

If conservative voters tap into the anger and passion they experienced during the Kavanaugh saga, they can mitigate the blue wave, and potentially make crucial gains in the Senate (think of the importance of the whip count should another SCOTUS vacancy arise).  If complacency again takes root in the wake of another win, things could still go quite badly.