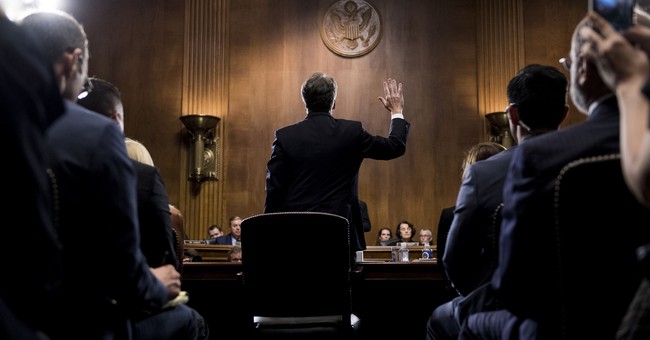 That's Los Angeles Times reporter and Washington Post alumnus Del Quentin Wilber, who graduated from Georgetown Prep a decade after Kavanaugh.  Add his voice to the chorus of people arguing on social media, on both sides, about whether "boofing" referred to flatulence or a sexual act back in the day.  What a time to be alive.  But Lefties' favorite claim in this vein has been that the "Devil's Triangle," referenced in Kavanaugh's high school yearbook entry, was a sex act involving three people -- not a drinking game, as he testified.  If he lied about the Devil's Triangle, he can't be trusted on anything.  He did not lie.  According to another Georgetown Prep graduate from Kavanaugh's era at the school, he was the teenager who invented that term.  He doesn't offer that assertion now; he made it back then.  In his own yearbook post.  He's now signed a letter to the Judiciary Committee confirming that, indeed, the "Devil's Triangle" was a drinking game:

Jake Tapper of CNN also tweets out a second letter written by non-classmates of Kavanaugh, who recall a college friend of theirs (a Georgetown Prep alumnus) teaching them the game at Boston College. It involved three cups, exactly as Kavanaugh said:

With all of this evidence in place, please go back and enjoy this exchange between Sen. Whitehouse and Judge Kavanaugh.  It was pathetically amusing then.  It's pathetically hilarious now:

Whitehouse also advanced a half-baked theory about Kavanaugh's calendar that turned out to be total rubbish, as well.