Murkowski Is Opposing Kavanaugh, But She's Helping Out A GOP Colleague On The Day Of His Daughter's Wedding 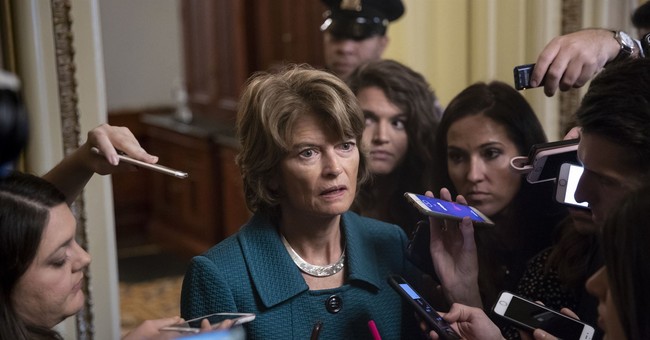 Sen. Lisa Murkowski (R-AK) is a “no” vote on the Kavanaugh nomination. During the summer, Justice Anthony Kennedy announced he was retiring. President Trump nominated Judge Brett Kavanaugh to fill the vacancy. Conservatives have a shot at having a solid conservative majority on the Court that could increase if Trump gets a second term. The thought of Trump playing a part in shaping the Court terrifies the Left. All seemed to go well. Kavanaugh was on his way to a smooth confirmation until last minute sexual misconduct allegations were lobbed against him. Deborah Ramirez, Christine Blasey Ford, and Julie Swetnick came forward with the allegations that are lacking in evidence and corroborating witnesses. Ford says a drunken Kavanaugh tried to rape her at a highs school party. Ramirez alleges that Kavanaugh exposed himself at a party at Yale. Swetnick, the most outrageous of them all, says that Kavanaugh was part of a gang rape ring. It’s total crap, especially the third allegation, which isn’t being taken seriously by the elite news media either.  It’s just too outlandish. The New York Times refused to do full length stories on Ramirez or Swetnick because they couldn’t confirm anything.

GOP Sen. Steve Daines, who is currently attending his daughter's wedding in Montana, will reportedly still fly back to vote for Kavanaugh because he's ??NOT ??TIRED??OF ??WINNING ??

This was part of the anti-Kavanagh blitzkrieg in which the Left tried to destroy a man, use a woman’s attempted rape allegation to score political points, and try and recruit the FBI to do their dirty work. They almost succeeded, but they failed. Kavanaugh has the votes for confirmation.  Sens. Jeff Flake (R-AZ), Susan Collins (R-ME), and Joe Manchin (D-WV) are voting to confirm. That’s the ball game. Murkowski is still a “no” vote; she voted no on cloture too Friday morning. She delivered a rambling speech explaining why she’s still opposed to Kavanaugh, where like 65-70 percent of the speech it seemed sounded like a ringing endorsement of the man. She said that she hopes that nomination process isn’t irreparably politicized in ways we have seen over the past few days, that things aren’t as partisan or nasty, and that while she thinks Kavanaugh is a learned judge and a goo man—he’s not right for the job, or something. The woman has no spine. She caved to the progressive social justice warrior mobs that have infested the capital. Instead, she said she will be voting “present” instead of no to give Sen. Steve Daines (R-MT), who briefly was an accidental key vote in this fight, time to celebrate his daughter’s wedding. Daines is in Montana for the celebration and as of Thursday night, it seemed he would be needed back in D.C. to cast his vote. He said travel arrangements were made just in case. He would walk his daughter down the aisle and then spring back to Washington. With Murkowski voting present, Kavanaugh is projected to be confirmed by a 50-48 vote, allowing Daines to stay in Montana to celebrate.

Sen Lisa Murkowski R-AK says even though she opposes Kavanaugh, she will vote 'Present' - so Sen Daines can stay at his daughter's wedding

So while the tally is 51-49 if everyone voted - with Murkowski & Daines not recorded on Saturday, the final vote should be 50-48

For those staying up late tonight, the Senate should be in session through the night. Debate time runs out just before 5 pm on Saturday.