The Home Stretch: Five Big Numbers to Know From The Week in Politics -- September 7, 2018 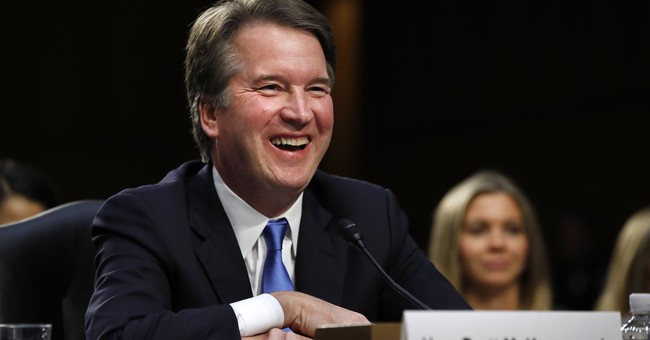 We're roughly two months out from the midterms.  Let's review the intense week that was, which didn't feel like it was truncated by Monday's holiday...

[55]  - That's my over/under on Senate votes in favor of Brett Kavanaugh's SCOTUS nomination, based on everything I'm reading and hearing.  As I mentioned earlier, Democrats do not appear to have the votes to block Kavanaugh's confirmation, strongly suggesting that all 51 Republicans, plus at least three Democrats, will will approve his promotion to the nation's highest court.  Joe Manchin and Heidi Heitkamp are likely 'yes' votes.  Joe Donnelly, whose polling lead is razor thin, will likely join them, as he did on Justice Gorsuch. That leaves Doug Jones of Alabama, Jon Tester of Montana, and Claire McCaskill of Missouri as the other upper chamber Democrats to keep an eye on.

If Jones wants any prayer of getting re-elected in 2020 (given the highly unusual circumstances of his special election win, and the deep conservatism of his state), he'll support Kavanaugh -- but it's unclear whether he places a higher value on his re-election odds or his progressive cred.  Tester would certainly invite more pointed attacks from Republicans if he votes against another pro-second amendment justice, having supported both of President Obama's appointments, both of whom are hostile to the broader (and correct, in my view) understanding of gun rights under the second amendment.  As for McCaskill, the most liberal of the bunch, she's keenly aware of the political dilemma she's in.  My strong guess is that she salutes Chuck Schumer as usual, but if she doesn't that could be a sign that she's extremely worried about her race slipping away.  We'll know soon enough.

[Zero] - California Senator Kamala Harris, who is pretty obviously already running for president, hinted heavily on Tuesday that she had proof that Judge Kavanaugh had engaged in some sort of inappropriate conversation about the Mueller investigation with an attorney at President Trump's former private law firm.  What she actually had was rumors, innuendo and demagoguery.  The charade was officially exposed when Kavanaugh gave her a flat "no" answer, after she refused to jog his memory or name the person with whom he'd supposedly spoken.  She had nothing:

.@senkamalaharris: "The subject of the question is you & whether you were part of a conversation regarding Special Counsel Mueller's investigation."

Judge #Kavanaugh: "The answer is no."

Harris: "Thank you. And it would have been great if you could have said that last night." pic.twitter.com/zfkOJJwHPB

Her hackery basically demanded that he deny an accusation that she wasn't even willing to explicitly level -- or even back up by revealing any of her alleged "evidence."  It was a bad look, especially after hyping up the Resistance, members of which were expecting her to drop the hammer on him.  She didn't, because she couldn't.  She's lucky Corey Booker embarrassed himself even more ostentatiously, or else her face-plant might be bigger news.  That said, another 2020 Democratic wannabe certainly noticed, and took some pretty clear shots at both freshmen Senators over their pointless antics.  Get your popcorn:

I sincerely hope (1) those four docs that were released this morning by Mr. Booker really were still confidential, so he can prove the GOP is lying and (2) that Ms. Harris discloses the evidence of the communications she suggested last night exists and then eviscerates Kavanaugh.

When I first started trying cases, my mentor taught me two basic things: 1. Never overpromise & suggest to the jury that you have evidence when you don't (i.e. get over the tips of your skis) and 2. Never get caught trying to deceive the jury. Words to live by in life as well.

As for the allegation that Kavanaugh "perjured himself" -- a claim advanced in a sloppy piece at Above the Law -- a former top editor at that site dismantled that lazy, error-riddled argument in a comprehensive and compelling tweet thread.  Context and facts matter.

[Eight] While Democrats postured and fulminated, and protesters shrieked and disrupted the Kavanaugh hearings, Mitch McConnell quietly continued his extraordinary project of reshaping the federal judiciary in partnership with President Trump.  Lost amid all the shouting and manufactured drama this week was this muted yet significant development:

They're making history, and they're only able to do so by dint of Democrats' own overreach.  Yet Schumer and friends still aren't learning their lesson.

[201,000] - The US economy created that many jobs in August, again beating expectations, as the national unemployment rate remains near a generational low of 3.9 percent.  When unemployment is below four percent, and the last quarter of GDP growth was above four percent, that's an outstanding sign.  But one economic indicator that naysayers and skeptics have been harping on as a weak spot has been wages.  What did today's jobs report show on that front?

The United States created 201,000 new jobs in August, keeping the unemployment rate at an 18-year low and generating the fastest increase in worker pay since the end of the Great Recession. Economists polled by MarketWatch had forecast a 200,000 increase in new nonfarm jobs. The unemployment rate, meanwhile, was unchanged at 3.9%, the Labor Department said Friday. The increase in hiring in August was another solid gain that reflects broad strength in an economy that accelerated in the spring and showed little sign of slowing down toward the end of summer...The biggest news in the August employment report was a sharp increase in pay. The average wage paid to American workers rose by 10 cents to $27.16 an hour. What’s more, the yearly rate of pay increases climbed to 2.9% from 2.7%, marking the highest level since June 2009.

US worker productivity is also up.  The economy is very, very strong, and Republicans desperately want voters to take note.

[14] - More than a dozen Senior Trump officials have now denied authorship of a much-discussed, sharply-critical, and anonymously-written New York Times op/ed submitted by someone purporting to work in the upper echelon of the administration.  Shortly after the piece appeared online, I shared my reaction on social media; I think most of this holds up quite well several days later:

(2) If you think you know better than the person *elected* by the American people, go get yourself elected. If you think your boss a serious threat to the republic, say so PUBLICLY in your resignation letter. Anonymous back-patting while keeping your job is so sleazy & so DC.

(4) Self-serving, sniveling, self-congratulatory -- while also touching off an obnoxious round of Beltway whodunit gossip and gleeful speculation. Gross, gross, gross.

[Friday Fun] - At the expense of America's self-imagined neo Spartacus: