Game Over? Senate Moderates Starting to Line Up Behind Kavanaugh 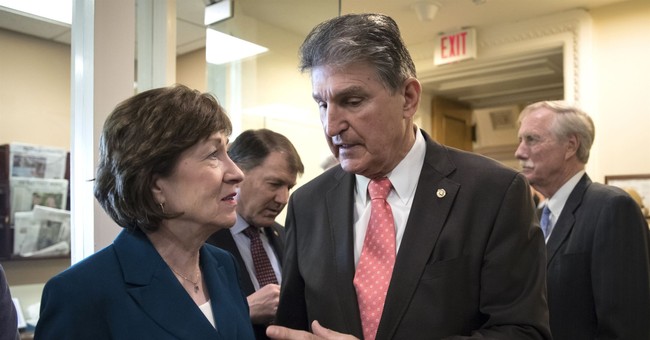 The pre-hearings attacks, distortions and Hail Marys all collapsed.  The table-pounding and hilarious self-owning during the hearings didn't move the needle.  And now it appears as though Brett Kavanaugh is more or less a lock to become America's next Supreme Court justice.  With Senate Judiciary Committee Democrats failing to land even one substantive body blow against Kavanaugh during multiple marathon sessions -- each of which was interrupted by deranged caterwauling from left-wing activists -- the writing is on the wall.  Barring a seismic event, confirmation is all but assured.  Let's start with two key red state Democrats whose constituents strongly favor confirmation:

Sens. Heidi Heitkamp (N.D.) and Joe Manchin (W.Va.) said they have not heard anything that would lead them to vote against the president’s choice for the highest court, CNN reports. When asked if she had heard anything that would disqualify Kavanaugh, Heitkamp responded, "Not so far." "No, I haven't seen anything from that standpoint," Manchin said, while adding, "He's handled himself very professionally." ... Kavanaugh’s nomination could pose challenges for Democrats running for reelection in states the president won in 2016. Support for Kavanaugh exceeds 60 percent in North Dakota, Montana, West Virginia, and Missouri.

Heitkamp and Manchin both backed Gorsuch last time around, and it's very much looking like they're preparing to give a thumbs-up to Kavanaugh, as well -- likely with support from a handful of additional vulnerable colleagues.  That sort of coalition is especially likely to form if it looks like it's a foregone conclusion that Republicans will vote en masse for the nominee.  If he's going to get confirmed, why alienate your own voters by sticking with Schumer on a hugely important vote...and lose the vote anyway?  On the other side of the aisle, the upper chamber's two most moderate Republicans represent the Democrats' best shots at peeling apart Mitch McConnell's crew.  But now that Jon Kyl has been sworn in to replace John McCain, the GOP majority is back to 51 active votes.  Schumer would need two Republicans to cross party lines and shoot down Kavanaugh.

With that math in mind, consider (a) that Lisa Murkowski has never once voted against a Republican president's SCOTUS nominee during her tenure in office, and has shown no signs of doing so this time, and (b) that Susan Collins has never cast a floor vote against the confirmation of any president's SCOTUS nominee.  What if Democrats can convince her that Roe v. Wade is in grave peril if she approves Kavanaugh?  Might yesterday's yawner of a "bombshell" cause her to change her (so far, quite positive) tune on Trump's pick?  Nope:

Collins dismisses Kavanaugh 2003 Roe email, noting “he was merely stating a fact, which is that three judges on the court” would vote overturn it. “If that is the case, and he was not expressing his view, then I’m not sure what the point of it is.”

Allahpundit explains why the perfunctory lefty freakout over that leaked Roe memo was obviously synthetic and phony:

“Bombshell!” say the liberals on Twitter...Here’s how much of a bombshell that is: Two weeks ago Susan Collins met with Kavanaugh, then came out of her office to face reporters and assure them that Kavanaugh had told her he thought Roe was settled law. “That means nothing!” lefties roared. “Everything is settled law until the Supreme Court says it isn’t!” Which was correct. We all understand the tapdance that nominees perform on this subject. Roe isn’t “settled law”; if it were, there wouldn’t be an iota of the sturm and drang surrounding SCOTUS confirmation hearings that we typically experience. So here’s Kavanaugh as a Bush lawyer acknowledging that plainly, not even claiming the “unsettled law” position for himself but merely noting quite accurately that other legal scholars hold that view. And the left is suddenly opportunistically aghast. They’ve got nothing.

Even with things looking pretty solid, conservative groups aren't taking any chances, pressing the case for confirmation in televised ads in the lead up to votes:

Another point about the hearings: Remember Kamala Harris' foreboding line of inquiry Wednesday night about possible secret conversations Kavanaugh had with someone at Trump's former private law firm?  It really looks like she was pulling that evidence-free claim out of her rear end, too.  Her staff claimed it was something (a theory? a rumor? a complete fabrication?) they were "pursuing."  Ah, okay:

Kasowitz to CNBC: “There have been no discussions regarding Robert Mueller's investigation between Judge Kavanaugh and anyone at our firm” https://t.co/s9cUdjwTVe

Her insinuations on this front were "puzzling," "unfair," and "proved nothing," says...CNN's liberal legal analyst. Nice job, Kamala.  I'll leave you with this delightfully amusing double screw-up from Democratic staffers.  We already knew they had nothing on Kavanaugh.  We didn't realize they also lacked spell check:

Take a bow, Democrats.  It's been a banner week.