All About Judges: Maintaining the Trump-McConnell Confirmation Carousel Should Be Conservatives' Top Priority in the Midterms 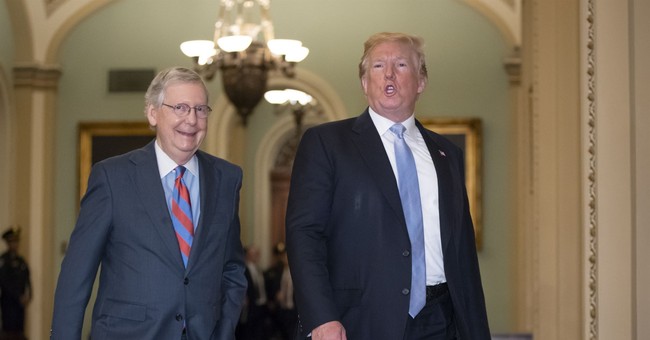 As the political media continues to mull over and parse last night's outcome in OH-12, many conservatives continue to believe that the most important action is still in the US Senate -- where a very favorable 2018 map greatly enhances Republicans' chances to retain Congress' upper chamber for at least two more years.  Let's stipulate for the sake of argument that Democrats are favored to take back the House of Representatives (RealClearPolitics' senior elections analyst Sean Trende thinks they're a slight favorite to do so, yet still doesn't envision a 2010-style wipeout, due to an exposure gap; a concept he explains here). That would mean that any semblance of advancing a conservative agenda in the back half of President Trump's first term would be effectively stymied.  The passage of virtually any legislation in a divided government would require bipartisan negotiations, with each party generally incentivized not to concede too much ground.

But one absolutely essential conservative priority that could proceed without any input from the House is the ongoing confirmation of life-tenured constitutionalist judges to the federal bench.  Even beyond tax reform and deregulation, this has been Trump's foremost conservative legacy, bar none.  He's making a lasting imprint on the judiciary in ways that will resonate for decades, vindicating the decision of millions of skeptical conservatives who decided to support him in 2016 over this exact factor.  This is a few weeks old now, but the Trump-McConnell partnership is churning out appeals court confirmations at a rapid clip.  Pay special attention to the brown and gold bars:

Trump is lagging on district court confirmations, and is on par with several others on SCOTUS appointments, but is far ahead of the pack on installing hyper-influential circuit court judges:

Donald Trump has successfully appointed more federal appeals court judges so far in his presidency than Barack Obama and George W. Bush combined had appointed at the same point in theirs, according to a Pew Research Center analysis of data from the Federal Judicial Center. And with his nomination of Brett Kavanaugh to the Supreme Court, Trump soon could install his second justice on the nation’s highest court, too...Obama and Bush had each appointed nine appeals court judges at this point in their presidencies, while Bill Clinton had appointed 11. George H.W. Bush and Ronald Reagan came closest to matching Trump’s total with 15 and 14 confirmed appeals court judges, respectively. Carter had appointed 10. Despite his record on higher-court appointments, Trump trails his predecessors in confirmed district court judges, the lower-court jurists who are charged with deciding civil and criminal trials, rather than appeals.

For all the attention (rightly and understandably) paid to the Supreme Court, circuit courts of appeals handle an exponentially larger case load every year, from coast to coast.  In short, the president and Senate Majority Leader have their eyes on the ball.  And if Republicans can hold their Senate majority, that will facilitate at least two more full years of the confirmation merry-go-round -- all enabled by the Democrats' short-sighted 2013 Reid Rule power grab.  Those are the highest stakes, by far, of the midterm elections; yes, House races and gubernatorial contests are unquestionably important, but the US Senate is the most crucial front in 2018's electoral battles.  And on that score, the GOP is also playing some defense, in addition to aggressively pursuing numerous pick-up opportunities.  The most direct path for Chuck Schumer to replace McConnell as Majority Leader (and thus slow the judicial approval deluge to a trickle) would be for his party to gain three seats currently held by Republicans.  That would place enormous pressure on Republican challengers to unseat incumbents (we've written a lot about races in WV, IN, ND, MO, FL, MT, etc), with very little margin for error...all just to keep a razor thin majority.

Democrats' best shots at doing so lie in Arizona, Nevada and Tennessee.  The GOP is still embroiled in an acrimonious primary over Jeff Flake's soon-to-be vacant seat, with the Democrats' presumptive nominee benefitting from both the national climate and her would-be opponents' expensive and ongoing infighting.  In Nevada, incumbent Sen. Dean Heller is in the fight of his life, having barely prevailed in 2012.  But he's still viable, and his opponent is flawed.  Here's a new NRSC ad exposing her embarrassing resume inflations:

Nevada's most important political analyst is also blasting Rosen for her unseemly, partisan, self-aggrandizing boasting about her role after the Vegas massacre at an out-of-state fundraiser. It's not a good look. Meanwhile in Tennessee, here's Republican nominee Marsha Blackburn's post-primary ad, which is clearly an effort to unify the base around her Trump agenda-supporting candidacy:

I'll leave you with a new spot running against Joe Manchin in West Virginia, casting him as someone who's lost his way in Washington: