No, the President Should Not Have the Power to Shut Down Media Outlets Over 'Bad Behavior' 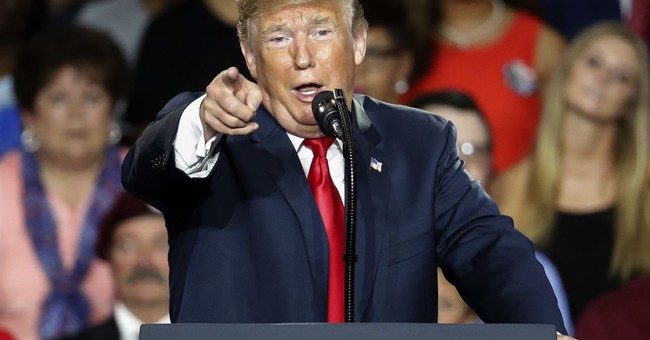 Earlier in the week, one notable result from a new national poll generated a fair amount of attention and commentary.  It showed a sizable minority of self-identified Republican voters (more than four-in-ten) approving of the idea that the president "should have the authority to close news outlets" that he or she determines to be engaging in "bad behavior."  Far fewer Democrats agreed.  Overall, driven by conservative-leaning Americans, more than one-quarter of the public is apparently willing to at least flirt with a concept that is fundamentally antithetical to a core constitutional underpinning:

Nearly half of Republicans surveyed — 44 percent — believe the president should be able to shutter news outlets for "bad behavior," according to a new poll released Tuesday. https://t.co/KPMNRxNSwd pic.twitter.com/uNjcC2Z4O0

Two small asides before I proceed with my larger points: First, you'd think USA Today's social media editors would be able to align their description of the bar graph in this tweet with what the bar graph actually shows (re: 43 vs. 44 percent).  Second, interestingly, there does appear to be pretty broad public support for President Trump's musings about "opening up" libel laws, as it pertains to journalists (the press generally receives fairly strong protections against such lawsuits, especially those filed by public figures).  In any case, as someone who has written extensively about my concerns over the erosion of reverence and respect for the values of free speech, free assembly, and free thinking on the political Left, I've also warned that a retaliatory impulse to silence and stamp out dissent is also taking root on the Right.  In many ways, it's simply a human impulse; it feels good to shut down or 'disqualify' people who say things you don't like -- and doing so is a tempting shortcut to going through the difficult process of actually having and winning cultural debates.  The hostility to open expression is therefore bipartisan, ebbing and flowing with the tidal shifts of cultural and political power.

I'd be curious to see the results of the exact same poll taken during the previous administration.  Let's say the survey had asked, "should the president have the authority to shut down irresponsible media outlets that cross the line into propaganda?"  What percentage of Democrats would have responded in the affirmative?  If the question wording had been even more explicit, mentioning Obama and Fox News by name, I suspect the positive response among Democrats would have swelled. Tribalism is powerful.  Keep in mind that the Obama White House launched a PR war against Fox in 2009, and just this week, a prominent elected Democrat fantasized about how much 'better' and "more unified" the country would be if Fox News' existence could have been erased years ago.  In short, my strong inclination is that these hypothetical poll results would have been alarming in the other direction, and that many conservatives would've reacted by rightly denouncing the anti-constitutional, authoritarian instincts of the Democratic base.  The same standard must apply now.  Loving the current president or hating some of his media 'enemies' is a terrible reason to loosen or abandon respect for core freedoms.  Pendulums swing, so central protections must endure.

Elsewhere in the tug-of-war over free speech and expression, what to make of several tech giants' coordinated decision to 'de-platform' grotesque conspiracy monger Alex Jones in recent days?  Some on the Right and Left are applauding the decision, citing Jones' particularly vile operation.  Indeed, certain lefties are already urging social media companies to expand the purge to include other right-wing figures they detest.  It's this sort of "hate speech creep" that worries me.  Writing in the New York Times, conservative attorney David French denounces Jones and his ilk, but raises some thoughtful red flags about relying on heavily subjective standards to scrub various voices -- all deemed to be somewhere on the 'problematic' spectrum -- from major online platforms:

There are reasons to be deeply concerned that the tech companies banned Alex Jones. In short, the problem isn’t exactly what they did, it’s why they did it. Rather than applying objective standards that resonate with American law and American traditions of respect for free speech and the marketplace of ideas, the companies applied subjective standards that are subject to considerable abuse. Apple said it “does not tolerate hate speech.” Facebook accused Mr. Jones of violating policies against “glorifying violence” or using “dehumanizing language to describe people who are transgender, Muslims and immigrants.” YouTube accused Mr. Jones of violating policies against “hate speech and harassment.” These policies sound good on first reading, but they are extraordinarily vague. We live in times when the slightest deviation from the latest and ever-changing social justice style guide is deemed bigoted and, yes, “dehumanizing.”... The good news is that tech companies don’t have to rely on vague, malleable and hotly contested definitions of hate speech to deal with conspiracy theorists like Mr. Jones. The far better option would be to prohibit libel or slander on their platforms...It’s a high bar. But it’s a bar that respects the marketplace of ideas, avoids the politically charged battle over ever-shifting norms in language and culture and provides protection for aggrieved parties.

Defenders of this type of speech suppression will argue that private companies like Facebook, Twitter, Apple, etc. have the right to decide what sort of content they'll permit on their product.  I'd note that a fair number of these same people do not believe that small private businesses have a right to decline participation in same-sex weddings, if such unions violate the proprietors' deeply-held religious beliefs.  It's almost as if some people's zeal for the autonomy of private business decisions is entirely situational.  Some may retort that discrimination against people based on immutable characteristics is materially different than barring certain content or pernicious ideas.  Just for the sake of argument, let's grant that point.  What would the people advancing it say about an NFL policy that bans, suspends or fines players who kneel during the national anthem -- voluntary speech that many Americans view as deeply offensive, or even hateful?  Isn't the NFL a private organization that can impose its conduct-governing regulations on its employees, as it sees fit?  Fans who don't like it can take their business elsewhere, and players who object can find other work, after all.

I'd argue that's all technically true, but cracking down with heavy-handed punishments against peaceful, silent protests isn't a healthy approach in a society that treasures free expression.  Just because large private businesses and organizations can take certain actions, or impose forms of sanctions, that doesn't necessarily mean they should. I'll leave you with a few disjointed thoughts related to this general subject: (1) If we continue to move toward de-platforming fringe voices (with the 'fringe' being a moving target), do we risk shoving disgusting speech "underground," where it will fester or even radicalize in more harmful ways?  (2) If major social media companies are widely seen as discriminatory against the Right, and other platforms crop up as competition, would the resulting ideologically-bifurcated, increasingly-polarized social media landscape be better or worse for our national health? (3) I'm not a fan of 'nationalizing' industries or treating more private companies as effective public utilities -- but to what extent do platforms like Facebook, Twitter and Youtube qualify as the modern definition of the 'public square,' vis-a-vis our collective conception of free speech?

I'm not pretending that these dilemmas can all be easily or cleanly resolved.  They can't.  But I generally come down on the side of more, not less, speech -- even when the speech is grossly offensive.  And I'm very suspicious of the who engage in the defining down or over-expansion of concepts like "hate speech," which can be used to constrict the universe of 'acceptable' expression in service of an agenda.