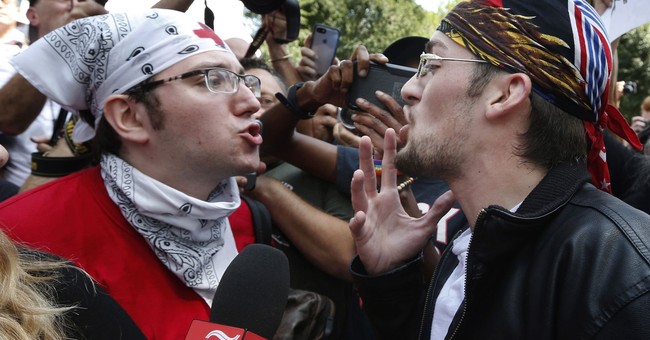 The rise of discussion-squelching intolerance and weaponized political correctness is not merely a figment of conservatives' imaginations.  It's the obvious, real, lived experience of a substantial majority of American college students.  A new nationwide Gallup poll of that population reveals that more than six-in-ten respondents recognize the problem of inhibited debate and expression -- with a perception that one group in particular faces significantly more viewpoint discrimination than others:

61% of U.S. college students say the climate on their campus prevents people from saying what they believe… https://t.co/t6IkXWiqqN pic.twitter.com/npEqHttMA9

Here's the good news: An increased majority acknowledges what's going on, with just 38 percent disagreeing.  And people understand that political conservatives bear a disproportionate brunt of the resulting effect.  Note the 23-point gap between liberals and conservatives on the above chart.  One side is correctly seen as more free to articulate what they believe without fear of repercussions.  But there's bad news, too.  Support for protecting free speech on campuses is falling, with more students prizing "inclusion" over fundamental freedom:

While more students now agree that their campus climate stifles free speech, fewer students now (70%) than in 2016 (78%) favor having an open campus environment that allows all types of speech, even that which is offensive. In contrast, 29% of students now, up from 22% in 2016, would rather campuses be "positive learning environments for all students" by prohibiting certain speech that is offensive or biased. Most major subgroups of students -- except Republicans -- have become at least slightly less supportive of open campus environments than they were in 2016...Majorities of college students believe protecting free speech rights (56%) and promoting an inclusive society welcoming of diverse groups (52%) are extremely important in a democracy. When asked to choose which is more important, they tilt toward inclusion over free speech, 53% to 46%.

Respondents were split nearly evenly on support for repressive 'speech codes,' with a slim 51 percent majority in opposition. What's encouraging is that very few students are in favor disinviting controversial speakers "because some students oppose the invitation" (28 percent), and even fewer (10 percent) agree that physical violence is at least sometimes justified to shut down a speaker's event. In other words, some of the most radical views remain on the fringe. But support for other forms of intolerance is much more robust. Nearly 40 percent say shouting down a speaker is acceptable in some cases, and fully 69 percent "favor colleges canceling planned speeches because of concerns about violent protests." This is an endorsement of the dangerous heckler's veto, which perversely incentivizes violent threats from bad, authoritarian-minded actors.

I've occasionally encountered arguments on this front as I visit campuses across the country to address these issues.  One point I tend to make is this: If a group of white supremacists or Neo-nazis publicly vowed to knock heads and riot in order to shut down an lecture featuring, say, Ta-Nehisi Coats, would students agree that their administration should cancel the event in order to keep the peace?  Or would they demand that the speech must go on as planned, in defense of the principle that fascist thugs shouldn't be permitted to dictate who gets a platform at their school?  My strong suspicion is that an overwhelming majority of students from across the ideological spectrum would take the latter view, and rightly so.  The exact same standard should apply when the roles were reversed -- with, for example, the safety of a scheduled appearance by Ben Shapiro or Ann Coulter being imperiled by far-left agitators like Antifa.  Principles are only principles if they're evenly and consistently applied.  As I posted several weeks ago, the Wall Street Journal's 'lessons learned' editorial about the triumph of free expression in the face of adversity at Brown University was important:

The Wall Street Journal has written a superb editorial flagging the most important lesson from my recent free speech adventure at @BrownUniversity: https://t.co/nWWHqzZWyJ

Adults must act as adults, and groundrules must be clearly established -- with the credible threat of enforcement.  Meanwhile, here's a worrisome but fairly typical statistic about "hate speech" (via Allahpundit), followed by a reminder of why such subjective judgments can be a problem:

.@Doucheous @benshapiro tell you what: I'll let you ban hate speech when you let me define hate speech.

As a factual reminder: Hate speech is constitutionally-protected free speech, no matter how vile or offensive it may be.  I'll leave you with the point that just because a student group can offer a platform to someone's ideas, that doesn't necessarily mean that they should.