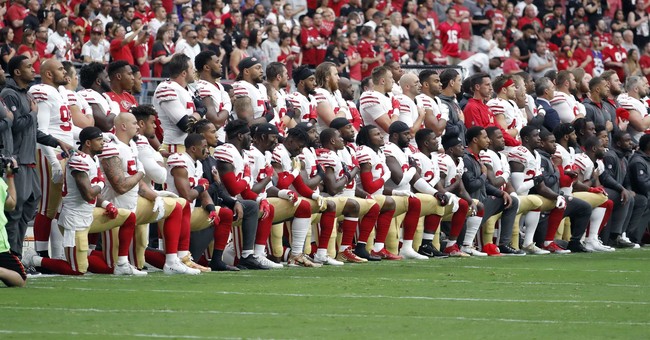 I wanted to circle back to a poll Leah referenced earlier in order to highlight another aspect of it.  She wrote about how its findings preview some of the potential financial consequences the NFL may suffer if a significant percentage of long-term fans remain alienated from the league to the point of consuming its less of its product in person, on television and through purchases of merchandise and apparel.  A CNN anchor reported yesterday that NFL owners are in possession of data that reinforces President Trump's assertions that anthem protests are one of the factors that have put a dent in the sport's image and ratings.  The new poll, commissioned by Yahoo Finance, surveyed pro football fans -- i.e., the NFL's audience -- as opposed to the wider public.  While clear majorities of the American people oppose anthem kneeling, it looks like actual fans are even more hostile to that particular form of protest:

We wanted to limit our survey, conducted online via SurveyMonkey from Sept. 28-29, to people who patronize the NFL, and exclude people who have an opinion but don’t watch football. So we only counted answers from people who describe themselves as pro football fans. Eighty-eight percent of respondents said they watch at least one game per week, with 46% of those saying they watch more than two games...In a recent Seton Hall Poll, 84% of respondents said they support the players’ right to protest. But only 35% said kneeling during the anthem was the right way to do it. In the Yahoo Finance survey, we asked specifically if people felt it was wrong for players to kneel during the anthem. Seventy-seven percent said yes, 20% said no.

The same poll found that a large plurality of NFL fans would like to see the owners and players suffer financial consequences over anthem kneeling; just shy of 50 percent said they would be "pleased" with this outcome, whereas only ten percent said it would "bum them out."  I've said it before, and I'll say it again: The cultural and political gap separating sports fans and sports journalists is gigantic.  The former tend to skew right-of-center; the latter break hard to the left.  Are NFL franchises (and other professional sports leagues) trying to mitigate this disconnect?  Anthem kneeling fell dramatically on Sunday, from roughly 180 players last week to only about 40 this week:

I'll leave you with this video of fans in deep red, um, Baltimore loudly booing their team as they took a knee prior to the anthem yesterday:

I've seen people complaining that this reaction proves that many fans won't tolerate any form of protest, even if it's not during the anthem.  That's unfair.  How were people in the stands supposed to know that the players planned to stand back up for the Star Spangled Banner?  The boos rained down based on the assumption that the players were taking a knee for the song itself.  I, for one, have zero problem with pre-anthem kneeling to make a statement and draw attention to a social issue.  I'd bet most fans would agree -- see the Seton Hall poll cited above.