Mayor of Berkeley: The University Should Cancel Free Speech Week Because Leftists Might Riot 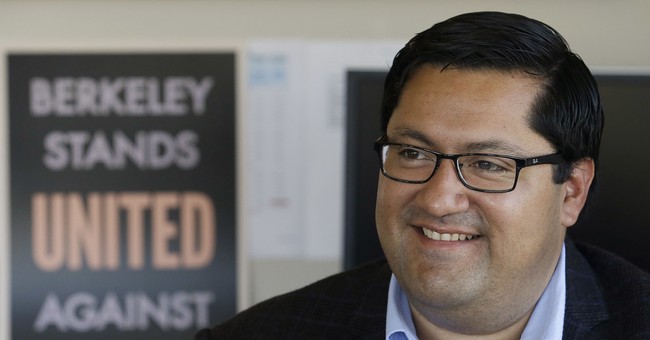 The good news/bad news see-saw on free speech continues to teeter back and forth.  On the positive side of the fulcrum, we have the new poll I wrote about this morning.  It shows that supermajorities of Americans are opposed to the phenomenon of weaponized political correctness being wielded to exact economic revenge on people who voice genuine political views.  Ideological purges may be all the rage on the 'End of Discussion' Left, but they're not playing well with Americans writ large (I should add that the exhausting scalp-collection wars continue to rage on both sides).

But so long as the mob keeps "winning," the silencing will continue -- and nowhere in the country has the mob asserted its dominance more than in Berkeley, California.  Last academic year, three separate events featuring right-wing speakers were canceled or shut down through violent rioting or threats of violent rioting.  This past weekend, peaceful pro-Trump protesters were assaulted by left-wing Antifa thugs who swarmed the streets of the city.  The militant arm of the left-wing "resistance" movement has finally behaved so badly, so often, that mainstream journalists (beyond Jake Tapper) are finally beginning to come to grips with their crimes and denounce them.  Here's the Washington Post's story on Sunday's attacks, followed by a well-deserved Morning Joe pile-on and a condemnation from the Post's Dave Weigel:

The black bloc is a menace, taking advantage of peaceful rallies to hurt people and socialize the blame. https://t.co/XJ2ZllpEGH

We've been exposing the Left's political violence problem for quite some time, especially recently -- ignoring mainstream media clucking about "false equivalencies" along the way.  Now that the press is starting to catch up on this scourge, when will they start to hold elected Democrats accountable?  Journalists frequently ask Republicans to disavow far-Right extremists, then debate whether their statements were prompt or forceful enough -- blasting inadequate responses, and sometimes questioning the sincerity of robust ones.  Is Nancy Pelosi ever going to get grilled for her anti-speech demagoguery last week -- which entailed reckless smears and an effective endorsement of the heckler's veto?  Where's the anguished hand-wringing over Terry McAuliffe's response to Antifa?  When asked about the group's violence, Virginia's Clintonite Governor and the former DNC Chairman effectively echoed President Trump's much-maligned "many sides" condemnation: "Anyone who committed violence, on any side, will be arrested. [...] Everybody’s entitled to do their protest but were not going to accept violence from anybody,” he said.  Is that sufficient, or is it a pro-Communism, violence-supporting dog whistle?  It's hard to keep track of the rules.  Not to be outdone, I give you the disgraceful Mayor of Berkeley:

In the aftermath of a right-wing rally Sunday that ended with anarchists chasing attendees from a downtown park, Berkeley Mayor Jesse Arreguin urged UC Berkeley on Monday to cancel conservatives’ plans for a Free Speech Week next month to avoid making the city the center of more violent unrest. “I don’t want Berkeley being used as a punching bag,” said Arreguin, whose city has been the site of several showdowns this year between, on the one hand, the left and its fringe anarchist wing, and on the other, supporters of President Trump who at times have included white nationalists. “I am concerned about these groups using large protests to create mayhem,” Arreguin said. “It’s something we have seen in Oakland and in Berkeley.” The mayor wants UC Berkeley to halt plans by a conservative campus group, the Berkeley Patriot, to host right-wing provocateur Milo Yiannopoulos during its scheduled Free Speech Week from Sept. 24-27...

“I’m very concerned about Milo Yiannopoulos and Ann Coulter and some of these other right-wing speakers coming to the Berkeley campus, because it’s just a target for black bloc to come out and commit mayhem on the Berkeley campus and have that potentially spill out on the street,” Arreguin said, referring to militants who have also been called anti-fascists or antifa. The anti-Yiannopoulos protesters inflicted $100,000 worth of damage to the school’s student union in February before taking to the streets of Berkeley, where several businesses’ windows were smashed...“I obviously believe in freedom of speech, but there is a line between freedom of speech and then posing a risk to public safety,” the mayor said. “That is where we have to really be very careful — that while protecting people’s free-speech rights, we are not putting our citizens in a potentially dangerous situation and costing the city hundreds of thousands of dollars fixing the windows of businesses.”

This is unadulterated garbage.  Rather than affirming that fundamental constitutional rights will be upheld and protected in his city, Arreguin is blaming the victims and using the crimes of the Left to justify silencing the Right.  It's skin-crawlingly disgusting to witness an elected government official explicitly urging another group of government officials (the administration of a public institution) to trample the First Amendment rights of citizens -- especially because a separate group of citizens refuses to abide by the law.  As far as we know, at least one of the planned "provocations" (conservative speech is now considered dangerous riot-incitement in the Bay Area) is still scheduled to move forward, following a failed cancellation attempt.  Ben Shapiro -- who will supposedly be allowed to speak at UC Berkeley this fall -- tweeted out some groundrules-laying and context-establishing sentiments last night:

3. That means the police should damn well do their jobs and stop violence. No excuses.
4. ATTENDEES, DO NOT SHOW UP FOR VIOLENCE. (2/)

6. Those who engage in political violence break the covenant of civilized society. The police must enforce that covenant. (4/)

Shapiro's solution is for the police to do their jobs, with the full-throated backing of elected officials -- a clear-headed assessment he offers after noting that conservative speech is literally less free in Berkeley, due to ever-present concerns over leftist mob violence.  The mayor's solution (and Nancy Pelosi's, it seems) is to prevent people like Shapiro from showing up in the first place.  It's egregious and unacceptable.  I'll leave you with a thought experiment: Can you imagine the conversation we'd be having right now if Paul Ryan called for a Black Lives Matter rally to be canceled because it might rile up some white supremacists?  Or if a Republican mayor or governor opined that a college ought to shut down a leftist speaker because neo-Nazis were threatening to show up and thump some skulls?  That is the functional equivalent of what is happening in the Bay Area right now.  How is that tolerable?  Or are anti-speech heckler's vetoes less distressing when the speech being vetoed is perceived as kind of icky by cultural tastemakers?  Hear, hear: